Sue is fascinated by the TARDIS crew’s new costumes.

Sue: Barbara looks like a dental nurse; Ian is going for a job interview; Susan is looking forward to spending some time on a farm; and the Doctor’s got himself a shiny new cloak. It’s all go, isn’t it? 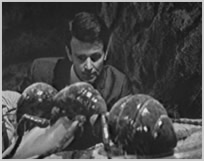 Sue identifies several parallels with The Edge of Destruction, mainly because the TARDIS appears to be on the blink again. She recalls how useless the fault locator is – “There’s something wrong with my switch!” – and she even remembers the last time the doors opened by themselves: “Does this mean they’ll turn into homicidal maniacs again?”

Sue: Did they get the idea for this story from Land of the Giants? I loved that show when I was a kid.
Me: Land of the Giants isn’t made for a few years yet.
Sue: So they nicked the idea from Doctor Who?
Me: Wait and see.
Sue: But it’s obvious. They gave it away with the title. They’ve landed on an alien planet with giants on it. Look, there’s a giant alien ant. Actually, that looks pretty good, even though it’s dead. I bet they couldn’t make it move, though.

When Ian and Susan stumble across an enormous seed packet with the words ‘Made in Norwich’ emblazoned on it, Sue cries, “A-ha!” (I can’t tell if the penny’s finally dropped or she’s trying to impersonate Alan Partridge), and then an amazing model shot reveals the truth: our heroes are trapped in crazy paving.

Sue: So it is Earth, then? That’s pretty clever. Well done.

Having said that, when the story shifts gears and we enter the real world, Sue feels a little cheated (“I’d psyched myself up for giant aliens in spandex”), while the subplot about DN6 fails to make any impression on her whatsoever.

Sue: Is that Percy Thrower?

She is, of course, referring to Frank Crawshaw’s rather unfortunate speech impediment.

Me: Maybe it’s an alien planet where people whistle while they talk?
Sue: Now you’re just confusing me.

Sadly, the cliffhanger, which is supposed to be pant-wettingly scary, doesn’t quite achieve the reaction it’s striving for.

Sue: Aw, what a cute kitty.

Sue: This is incredibly ambitious. I doubt they’d have the balls to try something like this today.

The crew split up, and while the Doctor and Susan are busy shimmying up a drainpipe, Ian and Barbara are carried in a briefcase to Forester’s laboratory. Sadly, curiosity gets the better of Barbara and she accidentally picks up a seed that’s been sprayed with the deadly DN6 pesticide. She tries to hide this fact from Ian in a way that reminds Sue of a zombie victim hiding a bite mark.

Sue: Ian has really gone down in my estimations. It’s obvious that Barbara has touched one of the seeds. Why else did she ask you for your bloody handkerchief, you silly fool! He should be more attentive to her needs; he is Barbara’s lover, after all.
Me: Well, that’s not strictly –
Sue: Bloody hell! That giant fly looks amazing! And it’s moving!

Barbara’s so overwhelmed by this fly, she faints. Sue is disappointed at first (“At least she didn’t scream”) but she eventually decides that Barbara is far too brave for nonsense like that, and she must have fallen over because the insecticide is slowly killing her. 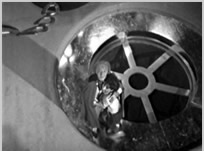 When we reach the kitchen sink, it takes her a few seconds to process what she’s looking at. At first, she thought the cast were standing on a blow-up photograph.

As Ian and Barbara clamber down the plug’s enormous chain, Sue remarks that Barbara’s trousers are very trendy for 1964. And then all hell breaks loose as Smithers and Forester arrive to scupper our heroes’ plans.

Me: Only Doctor Who could transform something simple like a person emptying a sink into something horrific.
Sue: It should be silly but it’s a great cliffhanger. We have to watch the next one straightaway.

I tell Sue the last two instalments were condensed into one because the producer, Verity Lambert, decided it was too boring and tedious for an audience to bear, and something had to be done to save it. Which means my wife spends the next 20 minutes trying to guess where the cuts were made.

Sue: I bet there was a really long scene where Ian had to read out what was on that notepad. The walk to the phone probably went on for ages as well. I think the cliffhanger probably happened after Barbara collapsed – there’s a very strange edit there. But I must say, I’m glad Verity made her decision, because this episode is paced really well compared to the others. Good on her.

Sue goes on to proclaim that three episodes is the perfect structure for a Doctor Who story. The first part sets it up, the second ups the ante and the third brings the resolution. Anything else is just padding. I can’t wait to see what she makes of The Daleks’ Master Plan.

Sue: This is the first time I’ve seen the crew actively resist the temptation to run away. Which is a little odd because running away right now would actually save Barbara’s life. Instead they decide to do the heroic thing and save the planet from eating genetically modified food. It’s bizarre, but heroic.

When the TARDIS crew try to set fire to a house, Sue can’t fault the ambition.

Sue: That was brilliant. They managed to convey that with some lights and a sound effect. Very impressive.

Brilliantly, it’s the telephone operator who saves the day, and it’s all because she doesn’t fall for Forester’s patently ridiculous ruse of sticking a handkerchief over the receiver when he disguises his voice. It’s enough to make you believe Crawshaw’s speech impediment was a plot point after all. 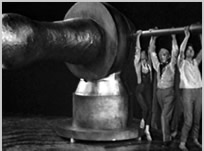 When our heroes return to the TARDIS – “There’s a massive chunk missing here” – and their normal size, Sue is left with a nagging sense of disbelief.

Sue: The only thing I don’t understand is why they shrank in the first place.
Me: The TARDIS is dimensionally transcendental. It makes perfect sense for the crew to shrink if everything goes tits up.
Sue: Yeah, I suppose that makes sense… A bit.

Sue: I really enjoyed that one. The sets were fantastic and the plot was very inventive, like The Borrowers crossed with The Avengers. I think it’s probably the best one yet.