As I slip the DVD into our PS3, I sigh. Loudly.

Sue: That doesn’t sound very promising.
Me: Sorry. Ignore me. I don’t want to prejudice you in any way.
Sue: You already have. Give it to me straight: how long and how bad?
Me: It’s short. Four parts. The first part is pretty good, actually. As for the other three episodes, well, it’s incredibly tedious. And that’s hardly a spoiler. You’d have to be clinically insane to make a case for this story. I wouldn’t care but I only watched it recently; if I knew we were going to embark on this mad experiment, I would have waited. The thought of putting myself through it again…

I shudder. And then I ask to Sue to imagine watching The Sensorites again – right now – and she nods sympathetically.

As I hit ‘play’, I let out an even bigger sigh. There was a time when I would have regarded this as dream come true. Here I am, sitting next to my wife, watching classic Doctor Who. Yeah, just think about that for a moment. And she’s really watching it. She isn’t merely glancing up to tut or pour scorn on it. No, she’s doing her level best to engage with the programme, and I’m the one who’s finding excuses not to watch it.

There are stories, whole eras even, that I can’t wait to show her (Sea Devils! Scorby! Paris 1979! The Kandyman!), but these Hartnells are driving me nuts. And we haven’t even got to the difficult ‘holes’ yet. 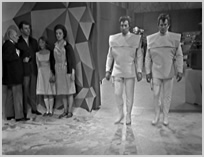 Having said that, the opening episode bamboozles Sue nicely. There’s a great moment where she describes the Morok guards as having even worse peripheral vision than the Daleks, and then she has to take it all back when it turns out that our heroes are actually invisible.

The Dalek exhibit shocked her, too, although she wasn’t surprised that Vicki didn’t know what they looked like, despite them invading her home planet and everything, because as teachers ourselves, we’ve encountered plenty of students who have never heard of Hitler; it’s not impossible, just tremendously sad.

Sue: I still can’t get over how you can go from a story that looks sumptuous and realistic one week to something that looks cheap and tacky the next. At least I know there’s always a good one just around the corner.
Me: Yeah, it’d be a nightmare if they stopped doing the historicals.

The cliffhanger manages to sneak up on her as effectively as it does our heroes.

Sue: Oh, I like that. That’s really clever. I don’t understand why you’re complaining so much.

The Dimensions of Time

Me: The good news is this isn’t the worst story to include the words ‘Dimensions’ and ‘Time’ in its title.
Sue: Is it really a good idea to have a character bored out of his skull as the bad guy? Is it trying to be funny, or is it just stupid?

Sue is appalled when the Doctor seeks refuge in a Dalek.

Sue: That is ridiculous!
Me: How is it more ridiculous than Ian clambering into a Dalek in the second story? Remember that?
Sue: Yes, but in that instance they scooped a slimy thing out of it first.
Me: It’s a museum exhibit! I’m sure they didn’t leave a Kaled mutant in there to rot! The smell would have been unbearable. Although it would explain why the museum’s attendance is so low.
Sue: But this Dalek has foam rubber inside it, it was clearly designed to have someone sit in it. It cheapens the Daleks if you ask me.
Me: Well, a) you ain’t seen nothing yet and b) maybe it’s a replica that’s been built by a fan of marauding alien monsters, and now it’s in a museum.
Sue: Sorry, I’m picking holes, aren’t I?
Me: Don’t worry about it. We’re simply mirroring what’s happening on-screen – our heroes are standing around bickering with each other to cover up the fact that ABSOLUTELY NOTHING IS HAPPENING!
Sue: At least they’re cutting up Barbara’s horrible cardigan. Good. It made her look like a stern midwife.

Barbara thinks all the corridors look the same and Sue nods her head sagely, choosing to regard it as a clever in-joke.

Unsurprisingly, the Moroks don’t impress her very much (“It’s a badger crossed with Londo from Babylon 5”), but it’s the rebel Xerons who really test her patience.

Sue: What’s the deal with the eyebrows?
Me: They’re aliens.
Sue: **** off!
Me: They are! One week you’re complaining the characters look too alien, and now you’re complaining that they don’t look alien enough. This programme can’t win.
Sue: Yes, but eyebrows? Is that really the best they could come up with? At least Star Trek added some funny ears.
Me: What can I say? They blew their budget on the Zarbi.
Sue: The lead rebel looks familiar.
Me: He should – it’s Jeremy Bulloch.
Sue: Is that supposed to mean something to me?
Me: If you can guess which iconic role he’s best known for, I’ll watch Ally McBeal with you from the very beginning. I’ll even start a blog called Adventures with the Wife in a Mixed-Sex Toilet. Although, on second thought, that would probably get us both sacked. Anyway, go ahead, have a guess.

I’ll spare you the rest, because I’m sure you know the drill by now, although I will reserve a special mention for ‘John Boy from The Waltons’.

She’s seriously unimpressed when I reveal the truth to her, and she’s practically punching me in the face when I tell her that they overdubbed Bulloch’s voice in the films, as well (twice!). But at least it relieved the monotony for a bit.

And then – completely out of the blue – we get an eyeful of William Hartnell in an Edwardian swimsuit. I still can’t believe I just typed that.

Sue: Whoah! What the **** was THAT? Forget the Daleks, THAT’S the scariest thing in Doctor Who so far. No contest. Good grief.

Sue: I can’t tell who’s worse – is it the bad guys or the rebels? There’s only one way to find out – FIGHT! Or in the rebels’ case – RUN AROUND A BIT! 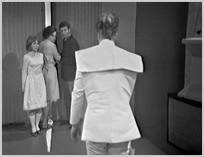 There then follows a bizarre scene where a Morok guard does everything in his power to hide his face from the camera. His whimpering voice is exceptionally odd, and when he ends up fighting with Ian, you still can’t see his face properly.

Sue: He isn’t an actor! No wonder he doesn’t want to show his face – he’s too ashamed! No, hang on, I’m sure the actor changed when the camera cut and they went through those doors. I think they had to replace him at the last-minute and they tried to cover it up. Badly.

Bloody hell, is she right? I honestly don’t know whether she’s channelling Andrew Pixley or she’s just gone mad, seeing patterns in things that aren’t really there. Answers on a postcard, please.

Sue: I’m really warming to Vicki. She’s a massive improvement on Susan. She’s articulating the same emotions I feel as I watch this. She’s criticising the rebels for being ineffectual idiots for a start. You know, I’m sure they’re taking the piss.

Stuart Ian Burns suggests via Twitter that we turn this episode’s production notes on for some light relief.

Sue: Production notes? What the hell are production notes when they’re at home?
Me: They’re basically subtitles for geeks. They provide fascinating background information on the episode you’re watching. And if you’re really lucky, they’ll make you laugh, as well.

She quickly becomes engrossed in the notes. I know this for a fact because she’s stopped sighing. 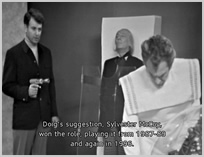 Sue: Do they have notes like this for every DVD, or is this an exception to relieve the boredom of The Space Museum? You know, like the Spanish Zarbi?
Me: Every DVD has them, I believe. Some of them are excellent. But we can’t watch them all the time – it’s too distracting – we’ll save them for tedious six-parters when we hit episode five and nothing much is happening. Deal?
Sue: Bloody hell – the vision mixer on this story helped Sylvester McCoy become the Doctor! This is insane!

Sue: They made a feature film with Peter Cushing!?
Me: Damn, that was supposed to be a surprise.
Sue: We should have done this ages ago. I bet it explained what was going on with that guard who wouldn’t show his face earlier.

She’s too engrossed in the notes to let me to switch them off. And who can blame her when the ‘revolution’ happening on screen is so cack-handed it practically begs the viewer to ignore it. This will turn out to be a mistake.

Sue: Well, that didn’t work. The opening episode was excellent, and the idea behind it was very clever, but they didn’t do anything interesting with it. And it was really, really slow. I bet it would be fantastic if they remade it now, though.

Just for a laugh, I persuaded Sue to watch Defending the Museum, the notorious DVD extra where Robert Shearman tries to convince everyone this story is a work of postmodern genius. When it was over, Sue turned to me and sighed.

Sue: I’ll have to mark it up.
Me: WHAT?
Sue: Rob’s right. It’s just as I suspected – remember how I picked up on the comment that all the corridors looked the same? They were taking the piss! It was ahead of its time and I was laughing at it for the right reasons instead of the wrong reasons.

Sue: So the Daleks are back and they’ve been redesigned, eh? I can’t wait.