Sue: Is the print damaged? It looks awful. Couldn’t they clean this one up?
Me: They have cleaned it up.
Sue: So why does it look like shit?
Me: Because they smeared a tub of Vaseline over the camera lens.
Sue: Vaseline? Are you joking?
Me: Fraid not. In fact, there’s a rumour that the DVD was delayed because they accidentally removed the blur when they tarted it up. But whichever way you look at it, whatever they did to the lens, they did it on purpose. It’s supposed to reflect the alien atmosphere on the planet.
Sue: Is that why the Doctor and Ian are wearing Space Anoraks? Actually, in all seriousness, it’s good thing walking around on an alien moon is shown to be a bit tricky. I like the strange echo on their voices as well – it’s very unsettling.

She’s also impressed by the pool of acid that destroys Ian’s old school tie, and she seems to be engaging with the weirdness that’s on display, despite her uncontrollable urge to squint at everything.

Sue: Argh! What is that terrible noise?

I’ll give you two guesses, folks.

Sue: It’s doing my head in! Is that a car alarm or a smoke alarm?
Me: Fans use that sound effect as a ring tone on their mobile phones. That way we can pick each other out in crowds.
Sue: Like Gaydar, only gayer?

But it isn’t all bad news. The episode’s conclusion is packed with tiny moments that meet with Sue’s approval: the scene where Barbara is forced against her will to leave the safety of the TARDIS is genuinely freaky, while the Doctor discovering that his precious ship has disappeared results in a very satisfying, “Hmm…”

Sue: Well, that was pretty good. The ants were ridiculous but they weren’t in it very long. The story is quite unnerving and the climax was genuinely scary. Yeah, that wasn’t a bad start at all. 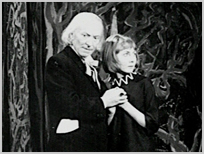 Sue: Do you know what I find really interesting about this story?
Me: I have no idea. Is it the set design? The Menoptera costumes? The sound effects?
Sue: No, it’s Vicki’s boots; they are really fashionable these days. Actually, Barbara’s trousers are really trendy, too.

Sadly, I don’t think the Zarbi will ever be in fashion – especially with those knees – and I’m pretty certain that Ian’s ‘two-in-one-anorak’ ensemble isn’t going to catch on anytime soon either (even in the circles I move in), but I have to admit, discussing Vicki’s collar is a lot more engaging than us watching a model TARDIS being dragged over a sand dune, or, as Sue describes it, “Michael Bentine’s Potty Time meets The Clangers.”

Sue: The direction is completely wrong. They should be using careful camera angles and shadows to make these things seem even half-believable, but they’re simply pointing the camera at the crowd and hoping for the best. The lack of ambient sound and music doesn’t help, either. It’s shockingly bad, like a really boring car crash.
Me: If we can get through this one, love, we can get through anything.
Sue: That’s the third time you’ve said that since we started this stupid experiment. How many episodes are left?
Me: Four. I’m sorry, love. Really, I am.
Sue: ‘Insect movement’? Insect movement!! Did I just read that right? Bloody hell, I’ve seen it all now.
Me: Yes, ‘Insect movement by Roslyn De Winter’ must be the strangest credit in broadcasting history. But how can you possibly hate an episode with a credit like that?
Sue: They should fire her. 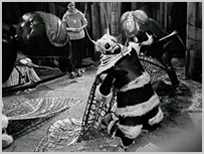 Sue: Roslyn is really into this, isn’t she? I bet she gives the other insects a hard time when they break out of character. I bet she thinks she’s being groundbreaking and artistic, but all she’s really doing is making everyone look 10 times sillier than they do already. And that’s no easy feat.

Sue: It’s like we’ve stumbled across an actor’s workshop where they have to express themselves and pretend to be a tree or something. I can’t believe they actually filmed and transmitted this rubbish. Oh. My. God. Did that ant really just run headlong into the camera? Did that really happen or did I just imagine it?

Any goodwill built-up during The Romans is dissipating rapidly.

Sue: Why is the Doctor using a hair dryer to communicate with the bad guy?

Sue isn’t placated when the Doctor refers to it as a hair dryer, as well.

Sue: Admitting it looks like a hairdryer just shows you how stupid it is. They may as well point out the ants are made of fibreglass, and those Dougal-Dogs with the guns on their noses are being pulled along on string.

When Vicki returns from the TARDIS with one of the Doctor’s ‘samples’ (aka a dead spider in a box) my wife blames the Vaseline for misreading the next scene entirely.

Sue: The Zarbi are frightened of the Doctor’s poo!

Sue: Rewind that bit. Go back. I need to hear that again.

Somebody is laughing off-screen. We think it’s Jacqueline Hill.

Sue: If that didn’t call for a retake, all bets are off. What the ****? Enough is enough, Neil. Seriously. I feel embarrassed just watching this. It must have been awful for the people who actually took part in it.
Me: There’s a really famous actor hidden under the Menoptera costume on the left. He was a household name in the 1970s and ‘80s. Can you guess who it is, just from his voice?
Sue: Derek Jacobi? John Hurt? Gyles Brandreth?

She’s still trying as the credits roll by.

Sue: Martin Jarvis? That name rings a bell. What’s he been in? Oh, you’ve found a picture of him on the internet. Oh, him! Wow. Martin Jarvis, eh? The poor sod. 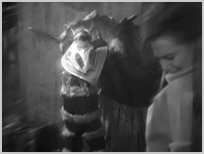 When a Menoptera picks up a larvae gun and squashes it against a wall, it’s difficult not to be affected by this bizarre, horrific and just plain wrong moment. But that’s nothing compared to the scene where the Menoptera swoop down on Kirby wires for a shambolic battle against the Zarbi.

Sue: This is just silly. Yes, it’s ambitious. Yes, they are trying their best. But it looks amateurish. What was Verity thinking? What was anybody thinking?

And then Sue asks the age-old question that’s troubled Doctor Who fans for decades.

Sue: Why couldn’t they have lost this story instead of the one with Marco Polo in it?

Me: We don’t have to go on with this, you know.
Sue: Are you saying we should give up?
Me: No, we just cheat a little and skip to the last episode. I can just replace the text for episode five with something like this:
Sue: Arrrrrrgggggghhhhhhhhh! Please! Make it stop! Please! Argggghhhhhhh!!!!!!! Noooooo!!!!! Roslyn De Winter! Arggghhhhhhhh!!!!!!!!!! Help!!! Nooooooooo!!!!
Me: I could string that out for a paragraph or two and Bob’s your uncle. No one need ever know.
Sue: I would know. We’d be cheating ourselves. If a job’s worth doing, it’s worth doing right. We have to watch the next one.

So we watched episode five. And it was ****ing rubbish.

However, it was worth it to witness Sue’s reaction to an Optera bravely sacrificing herself by sticking her head in a hole in the wall. As her derriere is suspended in mid-air, we’re supposed to mourn her heroic passing, but the only tears being shed by Sue are the result of uncontrollable laughter.

Me: I know, let’s treat ourselves! We can look at the next episode in Spanish!
Sue: You never know, it might make more sense. But won’t Rob Shearman accuse us of not really watching them properly if we do that? We won’t have to go back and watch it again, will we?
Me: If anyone complains, we’ll give them their money back.

We switch on the English subtitles and settle down for some Andalusian Animus action.

Sue: I love the way they’re doing their best to copy the voices of the original actors. Even the Spanish Menoptera sound thick. Vicki sounds like a Mexican bandit, though.

Brilliantly, whenever the English subtitles say ‘BEEPING NOISE’ the Spaniards decide NOT TO BOTHER! In fact, given that they didn’t have to use the ambient sound recorded in the studio, the audio is a lot easier to deal with: the Zarbi are lower down in the mix, and you can’t hear the larvae guns as they’re pulled across the floor any more. Amazingly, it’s a lot easier to watch. And then, when the Menoptera taunt the Zarbi, the episode starts to resemble a bullfight, and suddenly everything almost – almost – makes sense.

Me: The bad guy looks like Itsy or Bitsy from Paperplay. Yeah, it’s definitely Bitsy.

The story’s conclusion baffles Sue. It doesn’t matter what language we’re watching it in, she can’t tell what’s going on when Barbara defeats the Animus, or what Ian’s role in this victory is (assuming he has one at all), and when the TARDIS finally leaves Vortis behind, she actually cheered. But then we have to endure another five minutes of liberated rebels chatting among themselves.

Sue: I would have given it a zero if it wasn’t for the Spanish episode.
Me: But you really liked the first episode.
Sue: Screw that. That was months ago.