Mission to the Unknown

More than 10 minutes pass before Sue asks the obvious question. 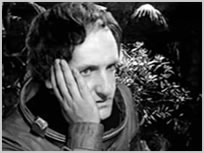 Sue: Where the hell is the Doctor?
Me: He isn’t in this one.
Sue: Has he gone on holiday again? Where to this time?
Me: Everyone has gone on holiday this week.
Sue: What? They can’t do that! I don’t understand…
Me: This is the first and only time in the history of the series the regular cast don’t appear in an episode.
Sue: So, technically, this isn’t actually Doctor Who?
Me: Well…
Sue: Just answer one question for me: Does anything we’re watching now have any bearing on the next episode?
Me: No.
Sue: So why the hell are we watching it?
Me: This is Terry Nation’s attempt to get an American TV show featuring the Daleks off the ground. I suppose you could regard it as an experiment to see if the metal meanies could hold their own without the Doctor being around.
Sue: The more I hear about Terry Nation, the less I like him. He’s just in it for the money, isn’t he? So, does this impact on anything this season?
Me: Oh yes. Wait and see.
Sue: Oh. Well, in that case, this is pretty interesting.

She picks up on the James Bond subtext immediately (“So this lot are MI6 in space?”), and she thinks the Varga plants are suitably scary (“Kids would have been terrified of rose thorns for weeks”). She’s also happy the Daleks are back to their evil, implacable ways after the bumbling farce of The Chase.

As the Daleks and representatives from seven alien planets discuss their nefarious plans, Sue asks the next obvious question:

Sue: Who are these guys?
Me: That question is so complicated, you’ll fall asleep halfway through the answer.
Sue: Is the evil Christmas tree real?

As the credits roll, we wave goodbye to Verity Lambert. 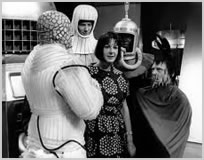 Me: Do you want to say anything about Verity before we leave her era behind?
Sue: She was a pioneer, an inspiration and a legend. I met her once, you know. She was lovely. In fact, you made me ask her a question.
Me: Did I? I’d forgotten about that. What did she say?
Sue: I have no idea. That’s why I’ll never be a fan.

Sue: Well, that was different. I liked it. It reminded me of Babylon 5, especially with the aliens having a big meeting, and the Daleks were a bit like the Shadows returning after a thousand years. It’s a shame a young Bruce Boxleitner wasn’t cast in it – Terry Nation may have got his American series.
Me: Did you miss the Doctor or his companions?
Sue: Not really. I guess that means it was successful.

Sue: I know I said I liked the recons, but I’m pretty sure I would have scored that one a lot higher if I’d actually seen it.