Sue: I don’t believe it…

That’s right, the Monk’s directional thingamy whatsit has burnt itself out. Sue isn’t pleased; just when she thought the Doctor could finally ‘drive’ his TARDIS properly. However, as luck would have it, it worked long enough to get him back to Kembel.

Sue: How big is Kembel?
Me: That’s a good point. They could have landed hundreds of miles away from the Daleks’ base. That would be funny.
Sue: They won’t have. It’ll be 200 yards away. It’s always 200 yards away.

Two hundred yards away, Mavic Chen is lording it up at a meeting of the galactic council. 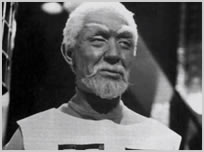 Sue: Chen is so stupid, he doesn’t realise he’s been betrayed by the Daleks. If the Daleks had a sense of humour, they’d be laughing their heads off by now. What a numpty.
Me: He’s a bizarre character – part-Blofeld, part-Basil Fawlty. I think he knows he’s been betrayed, but he’s so insane, he’s actually trying to convince himself he’s still in control of the situation. I almost feel sorry for the sociopath.

Chen is so unhinged, he murders a delegate who doesn’t address the chair correctly. That definitely wasn’t on the agenda.

Me: Aww, poor Gearon. I’ll miss Gearon. Gearon was my favourite.
Sue: Are you taking the piss?
Me: Yes.
Sue: Good.
Me: I like Beaus best.

When Sara and Steven arrive at the Dalek base, only to find it completely deserted, Sue comes up with an interesting theory.

Sue: Perhaps they’ve landed in the wrong time zone. Maybe they’re too late and the universe has already been invaded, or maybe they’re too early and nothing has actually happened yet.
Me: They might loop back on themselves.
Sue: That doesn’t bear thinking about. 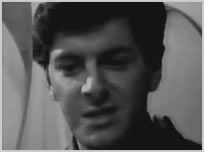 When Steven learns that Mavic Chen is being held prisoner (“I think the penny’s finally dropped for Chen”), he gets very tetchy indeed.

Sue: I can’t remember the last time Steven didn’t sound like he was itching to get into an argument with somebody. He needs to chill out a bit. He can be very intense, sometimes.
Me: He’s great, though, don’t you think?
Sue: Oh, don’t get me wrong, he’s very good. I don’t understand why he gave up acting to become a TV presenter.
Me: Maybe Doctor Who sucked his passion for the craft out of him.
Sue: Actually, that makes perfect sense.

Against his better judgement, Steven allows the duplicitous delegates to escape from captivity so they can warn their respective governments that they tried – and failed – to sell the entire universe out to the Daleks. He even sets Mavic Chen free – apparently he’s the only person who can warn the Earth that the Daleks are about to murder everyone, thanks to all that taranium ore he mined from Uranus when no one was looking. We bet that will go down well with the electorate.

And then his spar explodes.

Sue: Chen wasn’t on that ship. They wouldn’t kill him off-screen. He’ll be back. That reminds me, Hartnell’s been gone a long time.
Me: He must be on holiday again.
Sue: That’s odd, he was there for the first five minutes. Perhaps he snuck in a weekend break.

Chen’s break from the action is even shorter – he faked his own death so he could persuade the Daleks (who’ve moved to another base down the road) that he’s still working with them. We’re intrigued enough to press on with the final episode; the summit is within sight and we can’t give up now. 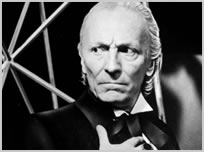 Sue: Twelve parts. Twelve. Bloody. Parts.
Me: Thirteen, if you count Mission to the Unknown.
Sue: I’m guessing this is a one-off and we’ll never have to sit through anything over six parts ever again? Yes?
Me: Don’t worry, love, there are whole seasons of Doctor Who that are only one episode longer than this story.
Sue: Really? That makes me feel a little better. I mean, it’s nearly May and we’re still on William Hartnell!
Me: Hartnell made loads of episodes; only Tom Baker beats him. It will get easier, I swear.

It may have taken them 12 episodes, but they’ve definitely saved the best till last. To put it bluntly, this one blew our socks off.

It begins predictably enough – the Daleks are sick of Chen’s antics but Chen is too far gone to realise that the game is up.

Sue: The Daleks should draw him a diagram.

The Daleks take the piss the only way they know how – they blank him. Chen loses his cool and he fires at the Dalek Supreme. The Dalek Supreme isn’t amused, and despite making it as far as a nearby corridor (“I almost want him to get away”), Chen is unceremoniously exterminated.

This distraction provides Steven and Sara with the opportunity they need to reunite with the Doctor, who immediately picks up the Time Destructor…

Sue: He’s going to bluff the Daleks with it.

… and switches it on.

Using a Dalek as a shield, the Doctor orders Steven and Sara to return to the TARDIS as hell begins to break loose.

Me: How intense is this?
Sue: Very.

The Doctor manages to delay the Daleks, giving his friends the time they need to escape, but Sara decides to stay behind. Oh no!

Sue: Why doesn’t the Doctor age as quickly as Sara? He’s a lot closer to the Time Destructor than she is.
Me: He’s an alien. He ages slower.
Sue: Of course he does. So when does he pull his finger out and save Sara, then? This isn’t a good look for her.

And then – in what has to be the single most horrific thing we’ve witnessed in the series so far – Sara ages to death.

Me: To lose one companion is careless. But to lose two companions in one story…
Sue: She’s not dead. You’re winding me up again.
Me: I’m not, I swear. She’s dead.
Sue: Bloody hell.
Me: So, was Sara Kingdom a companion?
Sue: Well, if whatshername was.
Me: Katarina.
Sue: Yes, her. Well, if she’s counted as a companion, Sara must be one too. She did loads more stuff – she spoke in complete sentences for a start. She travelled in time more than Katarina ever did. And she saved the Doctor’s life at the end.
Me: When was that, then?
Sue: She went back for him.
Me: So what? All she did was die for her troubles. If she’d listened to the Doctor, she’d still be alive now.
Sue: I suppose so. But at least she died trying to save the Doctor’s life. I liked her. She counts. Hey! Hang on a minute – has Steven saved the day by flipping a switch that’s put the machine into reverse?
Me: Yes.
Sue: Why didn’t the Doctor do that five minutes ago?!

As Peter Purves’ narration reaches fever pitch, Sue crumples her nose and wonders if the horror he’s describing could have been realised on a BBC budget. Daleks being twirled around in a whirlwind of detritus before imploding back into childhood? Really?

Sue: It probably looked terrible.
Me: Douglas Camfield is still directing this.
Sue: In that case, it probably looked incredible. Maybe this is where all the money went. It would explain a lot.
Me: Of all the missing episodes, this is the one I want to see recovered the most.
Sue: Not The Tenth Planet Episode 4?
Me: Forget The Tenth Planet Episode 4. This is much more interesting. I never realised the final episode was so intense. I really wish we could see it.

When the dust finally settles, Steven recites the names of the dead. It’s chilling stuff.

Me: And it’s finally over. The Daleks’ Master Plan. Beat you, cock.
Sue: I feel like I’ve accomplished something. Do I get a badge?
Me: Actually, I do have some epaulettes to go with your Sara Kingdom cat suit.
Sue: Stop it.

This is where things get complicated. This story was so long, Sue can’t remember what she thinks about it any more.

Sue: I don’t really know. It’s impossible to give it a single mark. Three out of 10, maybe? Is that too harsh? Four out of 10? The Monk was good, I suppose. Is six out of 10 too high? I mean… that bit on the film set. Oh dear. And it didn’t half go on. It could have been a tight six-parter. Maybe four out of 10? The last episode could have been a seven or an eight. Oh, it’s complicated.

She gets her calculator out.

Sue: Okay, I think it’s fair to say that some of it was rubbish and some of it was very good. I’ll have to split it down the middle, just to be fair.