I’m going to shake up the blog’s format for this particular instalment. Instead of writing up my notes episodically, I’m going to tackle it as a single entry. The reason for this is simple, The Myth Makers passed the ultimate test and we watched it in one go. Sue insisted.

The first thing she praises is the programme’s audacious decision not to follow Mission to the Unknown with the next logical part of that story, and I mentally kick myself for forewarning her yesterday.

Sue: The kids must have hated this. Do you think they were waiting for the Daleks to show up? The poor bastards.

We are both fascinated by the brief glimpses of Super 8 footage which sporadically pop up to tantalise us during the recon, and we notice the person who filmed these interludes wasn’t very interested in William Hartnell. In fact, since all the sequences feature Maureen O’Brien, we surmise the cinematographer must have had a crush on her. It’s rather touching, really, and if anyone knows of a more prosaic reason for these clips surviving, please spare us the details.

The story steps up a gear with the arrival of Odysseus and Agamemnon (“The last time we saw this guy, he was trying to rape Barbara”), and it quickly becomes clear this isn’t your average run-of-the-mill romp. Before we know it, the wife and I have been sucked into the story. We usually have to wait for a lull in the action to discuss anything of importance, but that never happens when the script is this good. We’re watching The Myth Makers like an episode of modern Doctor Who – engaged, enthralled and laughing our asses off.

And these are belly laughs we’re talking about here. We aren’t politely giggling at quaint, but dated, stabs at comic relief. Sometimes it’s the dialogue that hits the sweet spot (“It’s a bit late to say woe to the horse”), and sometimes it’s the performances – when Paris calls Achilles out for a fight we are both in hysterics. Even one of the episode titles gets a laugh.

Our favourite sequence occurs when the Doctor dismisses the idea of a giant horse because it’s patently ridiculous – Homer obviously made it up – so sells the idea of a flying machine to the Greeks instead. When this fails miserably, the Doctor resorts to plan-B and nicks Homer’s horse idea. It’s a multilayered joke that says a lot about the character of the Doctor, his place in history, and just how inventive this programme is when it wants to be. Most of all, it’s hilarious. William Hartnell is on fire.

Sue: This feels very modern. It’s dripping in sarcasm and the plot is very clever. The cast are incredible as well. It would take Richard Martin to ruin this one. Why doesn’t it exist? It’s so frustrating!

And yet, while The Myth Makers is consistently funny, it never strays into farce. Which is just as well given what happens in the final episode.

You know it’s coming, in much the same way you know Vicki/Cressida will fall for Troilus (“Do you think she’s heard of the best-selling book based on her imminent love affair?”), but it still feels like a punch in the gut when the blood starts to flow. In some ways, I’m glad we’re listening to Peter Purves describing the slaughter, instead of witnessing it first hand.

But of course, the biggest shock is saved for the very end. I know it’s coming and I’m surprised. 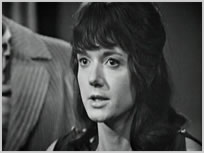 Sue: Eh? She’s a new companion? Who the hell is she? Kata-what?
Me: I must admit, this is a little odd. Katarina turns up in the last 10 minutes, does very little, and then she’s suddenly a member of the TARDIS crew. It would be like Amy Pond turning up at the end of Matt Smith’s first adventure and mumbling in the background. It’s bloody weird. There is a reason for it, but I’ll save it for later. Spoilers, sweetie.
Sue: It doesn’t help that she can’t act. Everyone sounds brilliant in this. Everyone except her. She sounds catatonic.
Me: Why couldn’t they have taken Paris with them instead? Imagine how much fun that would have been!
Sue: Look, can the Doctor steer the TARDIS accurately or not?
Me: No, not yet.
Sue: So how did he manage to bring the TARDIS back to Troy so Vicki can say goodbye to Troilus?
Me: He didn’t.

It slowly dawns on Sue that Vicki never left Troy in the first place. She stayed behind to be with Ian Ogilvy’s doomed doppelgänger.

Sue: No, that’s not right! They can’t do that, can they?
Me: They just did.
Sue: But she didn’t even get a proper goodbye scene! That’s another off-screen farewell. And Hartnell seems remarkably calm about her decision to leave given the dicky fit he had last time people upped and left him. I’m really confused by this development, and I’m not entirely happy about it, either.

It’s a traumatic experience for everyone concerned, especially Steven, who thrashes around on a bed moaning Vicki’s name, while Katarina wanders around like a stoner who thinks she’s died and gone to heaven.

Sue: Is it a rule that companions have to fall in love before they can leave the series?

Sue: Well, that was mostly excellent. It was very funny but still very bleak. Maybe a little too bleak. You really got to like those people. Maybe Paris was supposed to be a bad guy, but he’s so funny, it was impossible not to root for him. The same goes for Odysseus. You even sympathise with Cassandra a bit – she is right, after all. And then it’s complete and utter carnage at the end. It doesn’t seem fair. And I can’t say I’m thrilled about Vicki leaving, either, but it’s a bold move, I’ll give it that. Sod The Tenth Planet, or whatever it’s called.
Me: Fan.
Sue: Shut it. You told me The Tenth Planet was the Holy Grail of missing episodes. Well, it had better be something special to compete with this, that’s all I’m saying. The fans should spend more time searching for this one.

If it were up to me, I would have given The Myth Makers a 10. Even if this experiment goes tits up in the middle of a Base Under Siege, at least it gave me a reason to engage with the story at long last, and I’ll always be grateful for that. Seriously, if you’ve never experienced it before, you really should, you know. You won’t regret it.

Anyway, I don’t think we’ll be watching the next adventure in one sitting, so we may be gone some time.