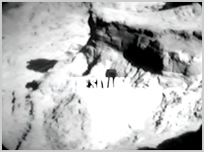 Sue: I miss the individual episode titles.
Me: Already? But at least you know what the story is called without having to ask.
Sue: I can’t read it properly – the background is too white. What does it say? ‘The Sky Ages’?
Me: This is proper Doctor Who. Look, we’re in a quarry.

Sue: What’s the deal with the weird string music? I feel like we should be watching Frankenstein.

The Doctor is greeted by some futuristic guards who are armed with guns which look suspiciously like the telescopes you find on top of skyscrapers and beach promenades.

Sue: Do they have to put a coin in the slot if they want to shoot somebody?
Me: They must be an advanced civilisation – they’ve invented BMX helmets.

The Doctor is escorted to a city to meet the Elders. They can’t get enough of him.

Sue: It’s the Doctor Who fan club! Hartnell is in his element here. Look at him – he’s loves it when people make a fuss of him.
Me: How have this lot been tracking the Doctor through time and space? That makes no sense at all.
Sue: Is this what’s it’s like at a Doctor Who convention? Will he have to sign autographs later?

Sue is concerned all this flattery is blinding the Doctor to the truth.

Sue: He’s very naive. It’s obvious these are the bad guys and the savages are the good guys, so what’s he playing at? Blimey, he looks like he’s about to join their version of the bloody Freemasons, now! 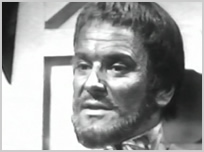 I draw her attention towards Frederick Jaeger, who is playing the Elder’s sycophantic leader, Jano. For no readily apparent reason, he appears to have been blacked-up.

Sue: No wonder I didn’t recognise him. I thought his voice was familiar.

After trawling through IMDb, Sue pins down Frederick as the pilot who teaches Frank Spencer to fly in Some Mothers Do Have ‘Em.

Me: It doesn’t make any sense. Why black-up at all? The rest of the Elders are white.
Sue: Are you sure? I can’t tell from these photos.

Now that she mentions it, I’m not sure any more, either. At times, it looks like the cast are wearing silver or gold make-up. Or really heavy foundation. It’s difficult to tell.

Sue: Dodo is very inconsistent, isn’t she? You never know which Dodo you’ll get from one week to the next. She’s really bolshy in this one. Steven is acting out of character, too. He’s very gullible today. It’s as if their roles have been reversed.

Dodo wanders away from a guided tour of the city – like C-3PO in The Empire Strikes Back – but instead of getting her head blown off, she stumbles across a terrible secret. Yes, Sue was right – this ‘great civilisation’ is rotten to the core, and they’re performing horrific experiments on the savages, including a poor woman who looks like she’s walked off the set of One Million Years B.C.

Sue: It’s turned into a zombie film. I bet this would have been scary at the time. Even the music has improved a little. Yeah, this isn’t bad at all. 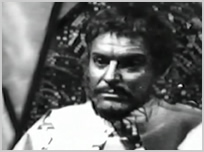 Sue: So, is this story racist or not?
Me: Well, assuming that it’s possible to black-up and not be racist, I’m still not 100 per cent sure.
Sue: But what is it trying to say? Is it that you can be an arsehole regardless of the colour of your skin? Or is he black because he’s the bad guy? Why are all the savages white? It’s got to be intentional.

We’re still scratching our heads when Dodo and Steven are reunited with the Doctor, who is still Time Lording it up with the planet’s Elders.

Me: What a complete idiot.

Sue has a lot more faith in the Doctor than I do.

Sue: Don’t be silly. He knows damn well there’s some serious shit going down in the city. He isn’t stupid. He’s just trying to be inconspicuous.

She’s right, of course. The Doctor is simply biding his time, and when he works out the Elders are sucking the life out of the so-called savages, he vows to stop them.

Sue: Hartnell’s really good here. It’s feels like the sort of thing the Doctor should be doing.

Sadly, the Elders don’t respond to the Doctor’s impassioned pleas for mercy, and he’s led away to have his life-force extracted.

Sue: Is this where he regenerates?
Me: Wait and see.

Aside from Sue’s observation that Steven has become the de facto hero of the show, there’s only one thing worthy of discussion tonight, and that’s Fredrick Jaeger’s impersonation of the Doctor. 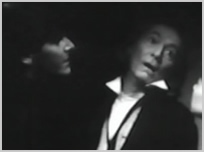 Sue: Is he supposed to be the Doctor? Was the machine powered by magic? And if it extracts a person’s personality, why don’t the Elders walk around like miserable idiots when they transfer the savage’s life-force into them?
Me: Well…
Sue: Are they trying to get rid of Hartnell again?
Me: They’re definitely trying to sideline him again.
Sue: I never thought I’d say this, but I’m starting to feel sorry for William Hartnell.
Me: This is a very strange episode for him. All he has to do is lie on a table and fall over in a corridor.
Sue: They could have sent him on holiday. It doesn’t seem fair.
Me: Rob Shearman thinks they’re experimenting with different ways to get rid of him. A few weeks ago they made him invisible, and now he’s in a different body.
Sue: Did they seriously consider changing the lead actor to this bloke from Some Mothers Do Have ‘Em on a permanent basis?
Me: I don’t think so. They were still figuring out how they were going to do it.
Sue: I guess they couldn’t have someone blacked-up playing the Doctor. That would have been embarrassing.
Me: It’s funny you should say that. Patrick Troughton claimed in an interview that he considered playing the role blacked-up. What if he had? It would be impossible to watch his entire era, instead of semi-impossible.
Sue: What?
Me: Never mind.
Sue: Well, they’d better figure it out soon. The next story is Hartnell’s last.
Me: I never said that. I said the next story was the last in the third season.
Sue: How many seasons is Hartnell in?
Me: Four.
Sue: I hate you.

As The Savages hurtles towards its conclusion – well, I say hurtle, it’s more a gentle jog – Sue is still engaged with the storyline.

Sue: It’s a good job the Doctor didn’t land on this planet two years ago – he wouldn’t have had a conscience to give. In fact, Jano would have ended up even more intolerable than he is now.

As if to prove how much he’s changed, the Doctor is as proactive as we’ve ever seen him, electing to forgo diplomacy for sheer brute force, smashing a laboratory to pieces in the process.

Me: The ending is a little pat, but at least it’s a message of tolerance. A message of tolerance delivered by a man whose face has been blacked-up. Oh, my head hurts.
Sue: It doesn’t ring true. I don’t believe one man can convince a planet of ****s to change their minds overnight. What’s to stop them from killing Jano and rebuilding those machines again?

What they really need here is an impetuous alien to help smooth things over. 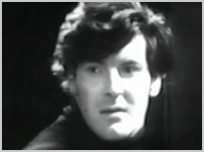 Sue: Steven isn’t going to stay, is he?
Me: Looks like it.
Sue: No! Don’t do it! He’ll be stuck there for ever. What if it all goes pear-shaped? What if he changes his mind?
Me: He was marooned on an alien planet when they found him, remember? It’s a fitting end. After all, who knows where Steven really belonged.
Sue: Poor Steven.

Brilliantly, tiny fragments of Steven’s departure have been captured on Super 8 film (including a very touching handshake with the Doctor, who is “very proud” of him), and as Steven turns away for the last time, Sue sighs.

Sue: I’ll miss Steven. He’s been holding the whole thing together for weeks now. I hope he’s all right.
Me: The Doctor could come back and see Steven one day. I just hope he isn’t blacked-up when he does.

Sue: That wasn’t too bad. It was surprisingly engaging, especially for a recon. The blacking-up makes me feel a little uncomfortable, though, not to mention confused. But on the whole, I enjoyed it. I’ll give it a solid: