The fourth season begins where the third season left off – with Polly and Ben barging they way into the TARDIS. 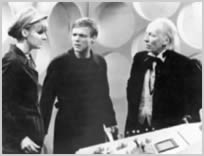 Sue: Ben and Polly are very modern, compared to what we’ve seen so far. They’re almost too modern. They may as well shout, “Fab and groovy, man!” at the top of their lungs and be done with it.
Me: The Doctor won’t be pleased.
Sue: But does he really want to travel alone? I doubt it. He needs someone to show off to.

Indeed, the Doctor is royally pissed off when Ben and Polly stumble into his ship, but a few seconds later he’s giving them both a guided tour and an adventure in 17th-century Cornwall. Polly is up for the challenge, but Ben (“Adam Faith meets a young Daniel Craig”) isn’t so sure.

Sue: Hang on a minute, let me get this straight. Ben doesn’t have a problem when it comes to a police box transporting him to a beach – instantaneously, mind – but he doesn’t believe he’s travelled in time as well. Do you think that’s likely?

She’s right, although watching Ben searching for a train station at every available opportunity is very entertaining.

Me: At least he’s sceptical. Polly accepts the premise of the show even quicker than Dodo did.

When our heroes enter the local church, Polly is mistaken for a boy, thanks to her trendy trouser-suit.

Sue: Is everyone in the 17th century blind, or did boys look like supermodels back then? It’s ridiculous.

And then the story turns very nasty indeed with the brutal murder of a drunken churchwarden, and, thanks to some very nervy Australian film censors, we even get to see it. As an extra-special treat, some Super 8 footage provides us with a taste of this story’s impressive exteriors.

Sue: You know, I bet this looked great. Look at all those lovely farm buildings. I could happily live somewhere like that. Why don’t the good episodes exist any more, Neil? It’s really starting to piss me off.

As we discuss this sad truth, Julia Smith’s directing credit fades into view.

Sue: Oh, I met her once. I think I asked her a question about EastEnders.
Me: What a waste.

The Doctor meets Captain Pike, who, despite his name, has a hook for a hand. It’s very distracting. 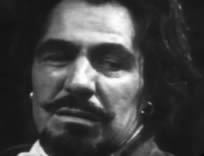 Sue: He isn’t exactly Johnny Depp, is he?
Me: The Avery mentioned here is the same Captain Avery who appears in The Curse of the Black Spot.
Sue: The curse of the what?
Me: You know, the Matt Smith episode with the pirates. Hugh Bonneville – him off Downton Abbey – played the same Captain Avery they’re talking about now. It’s his gold they’re after.
Sue: Oh, that’s nice, I suppose. Does this mean the pirate ship will turn out to be an alien spaceship?
Me: Not bloody likely. Actually, I’m not sure if that’s disappointing or not.
Sue: I can’t believe they still think Polly is a boy. I mean, look at her! She’s gorgeous!

Ben and Polly end up in jail for a murder they didn’t commit, which they subsequently escape from by bamboozling a guard with a straw doll and some superstitious nonsense about warlocks.

Sue: Why go to all that trouble? There’s more padding in this scene than in the bloody voodoo doll!

As the episode progresses, Sue’s enthusiasm begins to wane.

Sue: There’s too much talking and not enough action. I’m struggling to keep up with it. Who are the bad guys again?
Me: They’re all bad guys at this point, I think.

By the time the episode reaches its conclusion, Sue’s patience has well and truly run out.

Sue: Two more episodes of this… Couldn’t we listen to them in bed instead? We could fall asleep to them and the dialogue will soak into our subconscious dream state. I read about that, once. It’s worth a try, isn’t it?
Me: And how will I record your thoughts for the blog?
Sue: I don’t know. Automatic writing? 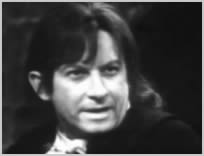 Sue: This bloke looks vaguely familiar.
Me: It’s John Ringham. He played an Aztec in, erm, The Aztecs.
Sue: No, I mean he looks like a young Bono.
Me: Not Penny’s dad from Just Good Friends?
Sue: Oh yeah. Him as well.

Two minutes into the episode and Sue stops talking for a good five minutes. This type of extended silence usually only occurs if she’s a) completely gripped or b) bored senseless.

Sue: I haven’t got anything interesting to say about this.
Me: That’s bloody typical. The same day this blog is crowned SFX magazine’s ‘Website of the Month’ – and you’re described as being “occasionally insightful” – you run out of things to say. That’s just great.
Sue: Look, it’s people talking in rooms. People I can’t see. From what I can gather, the carpentry is very good, though. Does that help?
Me: To be fair, hardly anyone has anything interesting to say about The Smugglers.
Sue: Don’t you mean, “Ooh-arrdly anyone?” Eh? Geddit? No?

Sue hasn’t been the same since I let it slip that Rob Shearman described her as a comedy genius on the blog last week.

Sue: You’re just jealous because more people have watched me take the piss out of the Daleks than have watched you climb Mt Kilimanjaro on YouTube. You’ll get over it eventually.

Before we can discuss this (she’s wrong), Jamaica turns up and we have to discuss the show’s racist past again.

Sue: At least he isn’t blacked-up.

Just as we’re about to launch into a critical dissection of the programme’s treatment of race – in a way that would have made Philip Sandifer proud – Jamaica is brutally murdered by Pike, which we get to see in all its gory glory.

Sue: There was a time when the Doctor would have legged it at this point. And if he did leg it at this point, the story would be a lot shorter. I think I preferred him when he was an irritable coward, after all.

Sue: I can’t believe people still think Polly is a boy. How old do they think ‘he’ is? Her voice is so high it could shatter glass. Look at her hips, people! 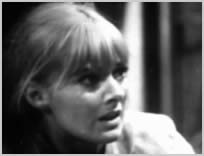 Sadly, the characters are too wrapped up in their own problems to notice Anneke Wills’ curves; they just want to kill each other so they can get their hands (and hooks) on Hugh Bonneville’s gold.

Sue: I hope this episode turns into a bloodbath. At least that way we might get to see some of it.

It does. And for long, extended periods we have nothing to go on but the sound of people fighting each other. Including poor Ben.

Sue: I like Ben. He’s a bit handy and he doesn’t **** about. Hang on a minute, did he just tell Polly to put the kettle on? That’s borderline genius!

A pirate grabs Polly and runs off to a cave with her.

Sue: I hope he’s not gay. He might try to rape her.

It’s a bloodbath. Pike kills Cherub and then Pike is killed by Penny’s dad. And it sounds as if the pirates got their rum-addled arses kicked, too. In fact, the only person who seems to make it out alive is the chief smuggler himself, the Squire. Not that the Doctor can be arsed with any of that – he’s legged it back to the TARDIS before he can cause any more grief.

Sue: I’ve just realised something – Ben is a sailor but he didn’t get to visit the pirate ship. Bit of a wasted opportunity, that. And here’s another thing, why is Hartnell on his way out? He was fine in this. He’s as strong and as confident as we’ve ever seen (or heard) him. I thought he was supposed to be ill?

Sue: There was nothing inherently wrong with that – it’s just that we’ve seen it all before. It wasn’t that bad, but it wasn’t that great, either. It wasn’t funny enough for me, and it feels like we’ve been treading water. I’ll have forgotten it by next week.

Sue: I hope something interesting happens in the next one.