A couple of hours before we settled down to watch The Underwater Menace, Sue and I appeared as guests on Bob Fischer’s BBC Tees radio show to shamelessly plug this blog. You can listen to the edited highlights below; Sue’s PVC Dalek-suit anecdote was news to me!

When the TARDIS arrives on a beach, Polly thinks she recognises the place.

It isn’t long before our heroes find themselves in trouble. A platform they are standing on is actually a lift, and as they hurtle beneath the sea, they all succumb to the bends.

Sue: That’s interesting. Ben asked Polly to get them out of there. He didn’t ask the Doctor, and he’s standing right next to him. I don’t blame Ben, though. This Doctor is useless.

When they regain consciousness, Polly finds some pottery with the 1968 Mexico Olympiad logo emblazoned on it, and when our heroes are suddenly confronted by people dressed in clamshells and seaweed, Sue thinks she’s figured everything out:

Sue: Are they rehearsing for an Olympic Opening Ceremony?

Their number includes a high priest with a dead fish on his head.

Sue: I really hope the Doctor doesn’t get a hat like that.

Our heroes are strapped to some slabs and lowered toward a mad man’s pet sharks. 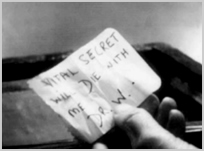 When the Doctor signs his name ‘Dr W’, he reignites an old debate.

Sue: You can’t argue with that. That settles it, his name is Doctor Who. You’ll just have to accept it, love.
Me: Unless his name begins with a W.
Sue: Like Doctor Wibbly-Wobbly-Timey-Wimey, you mean? Would that make you feel better? And why does it matter, anyway? I call him Doctor Who all the time.
Me: Yeah, and every time you do, part of me dies.

The TARDIS crew are on the lost continent of Atlantis (which is miles away from Cornwall).

Sue: Atlantis. Of course it’s ****ing Atlantis. Where else could they possibly be in this ****ed-up programme? Okay, so it’s James Bond on Atlantis. Got it. Fine.

The episode ends with some mad scientists strapping Polly to a table so they can turn her into a fish.

Sue: I don’t know what Polly is complaining about. She could stick around and enter the 1972 Olympics. Mark Spitz would have nothing on her. 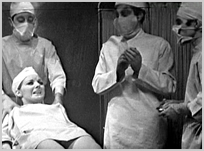 Me: Blimey. Just how short is Polly’s surgical gown?
Sue: Trust you to notice that, love.

The hot topic of conversation during this episode is Professor Zaroff. Obviously.

Sue: He reminds me of the mad scientist in that show you love, Neil. What’s it called? Comedy Theater 2000?
Me: Mystery Science Theater 3000.
Sue: That’s it. He reminds me of the scientist in that. He’s an over-the-top pantomime villain.
Me: Believe it or not, the guy who’s playing him is a very fine actor.
Sue: Oh, I don’t doubt it. He’s obviously having a laugh with the part. And who can blame him? How else could you possibly play it? His plan is completely pointless. There’s no reason for him to do any of this, he just wants to blow up the world. There’s no benefit or motive at all.
Me: He’s insane.
Sue: It’s lazy. I like him, though. He’s committed. He’s definitely the funniest villain in the series so far.
Me: Have you warmed to Patrick Troughton yet? He’s basically playing his version of the Doctor now. Well, more or less.
Sue: He reminds me of Ken Dodd in some of these photos. The music doesn’t help, either. It’s atrocious. It sounds like they’ve let a small child loose on a Bontempi organ. This is the worst music I’ve heard in the series so far. Who’s responsible for it?
Me: An Australian called Dudley Simpson.
Sue: Sack him. He’s rubbish. 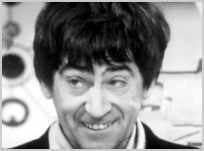 Finally, after 13 consecutive recons, we’re treated to a bona fide episode. I never thought I’d ever hear myself say this, but thank Amdo for The Underwater Menace Episode 3.

Sue: Even though the story is still a mess, it’s a thousand times easier to follow because it actually exists. I don’t want to state the obvious, but even the worst story improves when you can see it. Which means all the recons I gave good scores to must have been really good.

The highlight of the episode for Sue is, of course, the sight of Jamie and Ben gallivanting around in tight-fitting black rubber.

Sue: They should have called this story The Underwear Menace.
Me: I think the playwright Joe Orton mentioned this story in his diary. Or was it in Salmon Rushdie’s The Satanic Verses? No, it must have been Joe Orton; he fancied Jamie in his rubber suit. Or was it was Kenneth Williams?
Sue: Does Patrick Troughton ever go through a story where he doesn’t play that bloody recorder? And are there any stories where he doesn’t dress up at the drop of a hat (which he’ll probably pick up and put on)? He’s a borderline transvestite.
Me: You may want to hold onto something during the next scene. We’re about to meet the Fish People.
Sue: They look like a second-rate dance troupe waiting to audition for Britain’s Got Talent. I bet they launch into a dubstep version of Yellow Submarine.

A miner named Jacko attempts to turn the Fish People into striking militants. “Are you not men?” he cries. 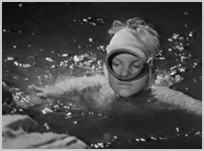 Sue: This is the lowest point in Doctor Who so far. Please make it stop.
Me: Is it worse than The Web Planet?
Sue: Yes, it’s even more half-arsed than that.
Me: It’s a perverse joke. You wait 13 episodes for a real episode to turn up and you get this.
Sue: I take it all back – this would have been better as a recon.

The Fish People’s rebellion has an immediate effect on Atlantis, because the food that they farm has to be consumed immediately.

Sue: Okay, let me get this straight: Zaroff has a nuclear reactor but he hasn’t got a fridge?
Me: This is your first proper look at Patrick Troughton. Have you formed an opinion of him yet?
Sue: I feel a little more comfortable with him now that I’ve seen him in action. He’s more animated than I expected, and he’s definitely got charisma to spare. Yes, there’s something about him. Sadly, the director isn’t doing him any favours, so I’ll have to reserve judgement until I’ve seen some more.

And then we reach the moment that The Underwater Menace is probably best known for. Take it away, Professor Zaroff…

Sue: He’s having a whale of a time.
Me: I’m glad someone is. 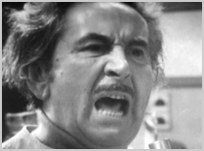 Sue: I still can’t believe that he didn’t bring some fridge freezers with him. Still, I guess if you’re planning to blow up the world, you can’t think of everything. You know, I think every episode of Doctor Who would be improved with a Zaroff. The only thing missing is a scene where he tears his hair out and screams, “Why am I surrounded by idiots?!”
Me: There’s still 20 minutes to go. I wouldn’t rule it out.
Sue: I also like the way the show has kept its educational remit.
Me: What?
Sue: Jamie is from the past, so he doesn’t understand what radioactivity is. Some of the children watching this programme wouldn’t know what radioactivity is, either.
Me: Yeah, that’s great. There’s just one problem – they don’t explain it to the audience. Polly says she can’t be bothered!

Polly is much too busy trying to escape the rising waters of Atlantis.

Sue: It’s turned into a disaster movie now.
Me: Oh, this is definitely a disaster, Sue.
Sue: Why is Polly wearing a fireplace corbel on her head?
Me: I don’t even know what that means.

Thanks to those Aussie wimps, we see Professor Zaroff drown. Well, I say drown.

Sue: Zaroff has hours left before the water rises above his head. Maybe he was bored and decided to commit suicide.

The world is saved, and the Doctor and his companions leave the Atlantans to rebuild their completely ****ed-up society.

Sue: Why are they rebuilding Atlantis anyway? Why don’t they just move to the surface? They’ve got fridges up there. And while they may have missed the 1968 Olympics, Mexico has the World Cup in 1970.

Sue: That was bonkers. And a little bit shit.

Sue: Zaroff was excellent, though. I could have watched him all day. I don’t think he’s dead, either. I think he was just wetting his hair a bit. He should definitely return in the new series. The League of Gentlemen could play him.
Me: What, all of them?