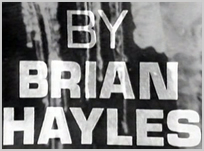 Sue: The credits are HUGE! Brian must be really proud of this story.

When we’re introduced to the bedlam that is Brittanicus Base, Sue immediately has a problem with its central computer.

Sue: Is there a Dalek loose on this base? Is that why everyone is panicking?

The next thing Sue notices is the base personnel’s rather distinctive clothing.

Sue: It’s like an avant-garde fashion show. It’s very 1960s. Has Mary Quant taken over the world? I like the way they aren’t all wearing the same design. It shows a great deal of imagination, even though it must have cost them a fortune.

As tensions rise inside the base, Sue lets out a weary sigh.

Sue: Remember how I praised The Abominable Snowmen for not being too hysterical? Well, this is hysterical. I’m surprised this woman’s plastic visor hasn’t steamed up yet.

The base’s computer continues to be a source of irritation for Sue.

Sue: I didn’t understand a thing that computer just said. Apart from the words ‘South Africa’. I can only assume that something bad is going to happen there. This is probably yet another example of the rac…
Me: Don’t even go there! You mentioned the R-word during The Tomb of the Cybermen and now a militant faction of fandom wants to burn us both at the stake. Well, they want to burn you, but I’ll do my best to protect you.

The TARDIS lands askew and slides down an embankment, which forces the crew to evacuate the ship horizontally.

Sue: Didn’t Matt Smith have to do this once? I keep seeing all these links to the new series. The crew have great chemistry, by the way. They are very comfortable together. Can’t we just knock about with them for a bit, without them getting into trouble? That would be nice.

It doesn’t take very long for Sue to notice the antique chandeliers.

Sue: They must have spent all the money on the costumes, which means they couldn’t afford to make any futuristic sets. It’s a clever way out of it, I suppose. And even if the decor does look old-fashioned, they still have gadgets like the vibrochair, which sounds sexy and modern. Can we get a vibrochair, Neil?

When the Doctor and his companions are threatened with transportation to Africa, Victoria almost faints.

Sue: What’s Victoria got against Africa? You know, this show is definitely…
Me: Stop it!
Sue: Okay, on a more positive note, I really like Peter Barkworth. He has the intensity of Patrick McGoohan and the charm of Simon Pegg. He’s great. I like the way he fills in the back-story with a little quiz. That was a very clever way of doing it.

An Ice Age has enveloped the planet and it’s up to the base’s ionisier to stop the glaciers from advancing across Britain. Clent shows the Doctor just how bad things are on a map.

Sue: They’ve put an Elastoplast on some glass. What the hell does that mean?
Me: Perhaps it’s a subtle metaphor for the role they’re playing in the unfolding disaster.
Sue: Or perhaps all the budget went on their costumes.

A frozen Ice Warrior, which was discovered by the base’s resident archaeologist (don’t ask), is brought to Brittanicus Base and starts to thaw.

Sue: So, this is basically The Thing meets Downton Abbey. Okay, I can go with that. 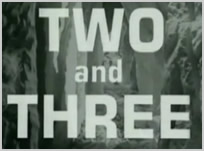 A few hours before we settled down to watch the next episode, I suddenly remembered that the 1998 VHS release of this story included a condensed recon of episodes two and three. And it’s only 15 minutes long! Sue almost kissed me when I told her.

Sue: Everything’s gone green.
Me: I’m not sure if that’s the age of this copy, or the recon was tinged with green deliberately. It’s very odd, but it won’t last long.
Sue: I bet the Ice Warriors are green.
Me: They are.
Sue: They don’t look that bad, actually.
Me: Why do you sound so surprised?

Sue gives me that ‘do I really have to ask?’ look.

Sue: I can’t understand anyone any more. The Ice Warriors slur their words, the computer is unintelligible, and everybody else is either Scottish or yelling over a storm. This story should come with subtitles.

The telesnaps allow Sue to concentrate on every detail of the Ice Warriors’ design, and she thinks she’s spotted a fatal flaw.

Sue: How did the Ice Warriors get to where they are today without opposable thumbs? How do they carry their guns?
Me: Their guns are built in to their hands.
Sue: I bet they don’t go on that many dates.
Me: Maybe, but they do make great drink holders.

Sue: I’m starting to go off Victoria. She’s turned into just another damsel in distress. She was kick-ass in that Cyberman story, but now she’s just a passive victim. And her scream could start an avalanche.

Sue will be proved right later on (which doesn’t exactly help), and she’s even more aggravated when an Ice Warrior walks straight past Victoria without a second glance. 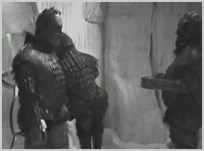 Sue: So, poor peripheral vision affects the Martians too? At least they can blame it on their big helmets, I suppose. Actually, I like their design. It’s very organic, and it doesn’t look too fake. I’m surprised this lot haven’t turned up in the new series. And look at the size of that Ice Warrior’s arse! In fact, that Ice Warrior in the middle doesn’t look quite right to me. Is he the runt of the litter, or did the fibreglass mould go wrong?

As the Doctor heads off to face the Martians, Clent monitors his progress via a communicator.

Sue: Peter Barkworth’s great. He’s selling this scene to me even though he’s just staring at a screensaver. I can’t praise him enough, even if the character he’s playing is a bit of a dick.

Sue: The Ice Warriors remind me of the snake from The Jungle Book.
Me: All that hissing?
Sue: No, they’re sending me to sleep. I’m joking. I quite like the Ice Warriors. At least you can take them more seriously than a cuddly teddy bear. I like the way they snigger at things. It’s not your typical evil villain laugh either, it’s proper full-on sniggering. Not that you can blame them – the last cliffhanger was a complete joke.

The base’s staff laments the fact the central computer won’t tell them what to do next.

Sue: It can’t tell them because they can’t understand a bloody word it’s saying! 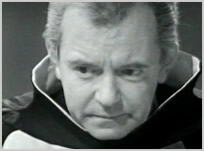 Sue: Peter Barkworth is very good in this. Have I mentioned that yet? This story is very intense and it’s mainly down to his performance.

The Ice Warriors decide to destroy the base with a sonic canon.

Sue: It’s Bernie the Bolt.
Me: Nice 1967 reference. Well done.
Sue: I can imagine Matt Smith taking on an alien monster with a stink bomb and not being able to get the cap off. It’s very funny.

It’s funny until Victoria throws acid in an Ice Warrior’s face. Unfortunately, he still manages to fire the bloody canon.

Sue: Oh dear, the Doctor seems to have lost this one. You don’t see that very often. Now that’s how you do a cliffhanger. 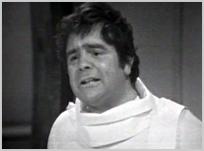 Sue: I like the way this guy suddenly freaks out and points out the blatantly obvious – he’s playing the Rhys role in this. You know, like on Torchwood when Rhys suddenly flips out and says what everyone is thinking. Which is that they’re basically ****ed.
Me: Because this is the last episode, there’s just enough time left for us to play ‘Let’s spot the heavily disguised Carry On… actor playing the lead Ice Warrior’.
Sue: Is it Hattie Jacques?
Me: You’re not taking this seriously, are you?
Sue: No, but Jamie and Victoria are getting serious. There’s definitely a romance blossoming between these two. Did you see the way Victoria reacted to the thought of Jamie being in danger?

Brittanicus’ computer errs on the side of caution when it comes to blasting the Ice Warriors with its ioniser.

Sue: It’s the computer that says, “No”. It’s probably made by Apple. Just look at its curves. And it’s gone wrong at precisely the same moment you need it to work. Yeah, it’s definitely made by Apple.

Penley urges Clent to ignore the computer, but the commander falls to pieces instead.

Sue: This is basically a bad day at the office for Peter Barkworth. I can’t say I’m surprised that he’s finally had a nervous breakdown. He’s bound to redeem himself at the last minute, though.

He doesn’t, and it’s left to Penley to sort out the mess. Sue can hardly believe it. She thought the ending would be a lot more pat than that.

Sue: I can’t understand a word the Ice Warriors are saying as their ship blows up. This story needs some bloody good sound remastering. Do you think they’ll ever VidFIRE this one day? Are you impressed that I remember what VidFIREing is, Neil? Because it depresses the hell out of me.
Me: Yes, I’m impressed. You even got the capitalisation right.

And then it’s all over. But before Penley can thank the Doctor and his companions, they’ve already legged it back to the TARDIS.

Sue: That was fairly enjoyable. It’s a shame about the missing bits. There were some good performances, some interesting monsters, and the plot wasn’t bad, either. However, it’s all getting a bit samey now. I hope we get something different soon.