The episode begins with a spaceship landing in a quarry. 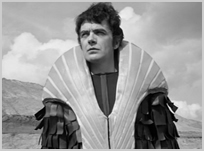 Sue: This reminds me of Lost in Space a bit. A cheap version of Lost in Space, mind. When was this story broadcast?
Me: August 1968.
Sue: I’d have been playing cricket or tennis with my brother. Even if it was raining, I still would have been outside. There’s no way I would have seen this when it was on.
Me: You should count yourself lucky. This is my third time. Anyway, it’s time to play ‘Spot the Soap Star’ again. Come on, you haven’t done this in weeks.
Sue: Oh, yes, it’s whatshername from Crossroads. The posh manager with the fake tan. I’m getting good at this.
Me: The actor or character name will earn you extra points.
Sue: Not a clue. Sorry. Oh my God, they’re wearing curtains!

Sue’s pointing at the Dulcians.

Sue: They’ve arrived in a giant lemon squeezer! This looks so amateurish. It’s actually painful to watch. The direction is terrible as well. You know, this would probably be more bearable as a recon. At least I could imagine what it would have looked like with a good director.

A man named Cully is organising illegal adventure tours to a radioactive island. Sounds like fun.

Sue: So this guy is basically Richard Branson on this planet? He looks like a bank manager. In a dress.

The Dominators, on the other hand, are as butch as they come.

Sue: They must be from a planet where shoulder pads evolved into men. Was the costume designer on hallucinogenic drugs? How did this get off the drawing board? It looks so cheap. I thought they had money to spend at the start of a new season – this looks like they’re scraping the bottom of the barrel already. And they should iron that cloth backdrop – look at the creases!

And then Sue spots another soap star. 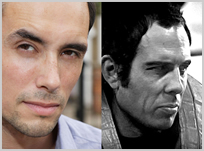 Sue: The other Dominator is Mad Michael Moon from EastEnders.

The Doctor and his companions have arrived on Dulkis, but instead of frolicking on a beach, they’ve ended up in a Museum of Death.

Sue: This has to be the world’s most dangerous museum – the exhibits include live firearms! This planet obviously hasn’t heard of Health and Safety yet. And it’s a very drafty museum, too. I bet they don’t get many visitors.

The Doctor and Jamie leave Zoe with the Dulcians while they investigate a report their TARDIS is being threatened by the Dominators.

Sue: I love the way Zoe can’t be bothered going back to the TARDIS with the Doctor and Jamie. The writers didn’t even try to contrive a reason it. How lazy can you get?

And then the Quarks are revealed to us in all their, erm, glory. 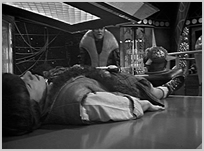 Jamie and the Doctor are captured by the Dominators and taken to their spaceship.

The Dominators want to know if the Doctor is capable of building an atomic bomb, so they set him a simple puzzle. But the Doctor fails the test on purpose, even though it means being administered with a painful electric shock.

Sue: This is just like Camp X-Ray – with the emphasis on camp.

The Doctor convinces his captors he’s a harmless idiot and they agree to let him go.

Sue: If the Dominators are so evil, without a shred of pity, why did they let Jamie and the Doctor go like that? The Daleks would have exterminated or enslaved them without a second thought.
Me: The Dominators literally haven’t got the energy.
Sue: I know how they feel.

Zoe wants to know where she can get a Dulcian dress from.

Sue: Why, Constessa Curtains, of course.

We’re still chuckling at that when the Dominators unleash their Quarks on a Dulcian survey unit.

Sue: That Quark isn’t even pointing at the target! Look at it!

The resultant explosion is very nice though.

Sue: That was painful. I can’t believe there are three episodes of this nonsense left.

Nicol: It’s Mad Michael Moon.
Me: We’ve already done that gag, Nicol. Don’t you have any homework you should be doing?
Nicol: No, I just graduated with a first class Masters degree in Mathematics from a red brick university. I’m unemployed, remember?
Me: Well, why don’t you make your mother a nice cup of tea? This isn’t for the fainthearted.
Nicol: But it’s moving.
Sue: Trust me, love, this is much worse than any recon. It’s The Dominators.
Nicol: Right. In that case, if you need me, I’ll be upstairs applying for a job in Burger King.
Me: You know, it’s hard to believe that Crossroads wasn’t the worst thing to star Ronald Allen.
Sue: He looks older here than he does in Crossroads, but I don’t think they had Botox back in the 1970s. So that’s strange. 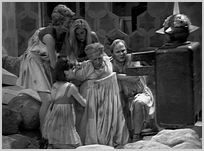 The Doctor tries to warn the Dulcians about the evil Dominators.

Sue: Stop calling them callous, pitiless monsters – THEY LET YOU GO! These so-called Dominators seem quite reasonable to me.

And as for the Quarks…

Sue: Just push them over!

The Doctor and Jamie are taking a capsule back to Zoe when they suddenly realise the Quarks will be waiting for them when they arrive. The Doctor attempts to override the capsule’s automatic pilot.

Sue: We all know what his piloting skills are like when he tries to fly the TARDIS.
Me: Don’t worry, this is much more primitive. He’s basically hot-wiring a taxi.
Sue: Whatever he’s doing, he’s making a right meal of it.

Despite his best efforts, the Doctor is captured anyway. Meanwhile, Jamie and Cully escape to the Museum of Detritus, where the episode suddenly turns into a bizarre level of Call of Duty. Jamie fires one of the museum’s laser gun exhibits and a Quark explodes magnificently.

Sue: I’m surprised it wasn’t full of socks and underpants.

Mad Michael Moon takes this development very badly indeed, and he vows to bring total destruction to the Museum of Partial Destruction. The Quarks comply with his orders, but you can tell their hearts aren’t in it.

Sue: That isn’t total destruction! They just knocked a bit more of it over! That’s pathetic!

It’s one of those rare occasions where I have to coax Sue into continuing with the experiment. They don’t come along very often (it’s usually the other way around), and, to be fair, this is hard going. Plus, things are really busy for us at work, and finding enough quality time to squeeze in some hot Dominator action is proving difficult.

Sue: Can’t we spice it up with the Spanish soundtrack?
Me: Well, we could watch this episode with the cast and crew commentary. It might…
Sue: Whatever. Let’s do it. Anything for a change of pace. 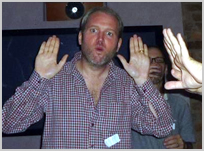 Sue: It’s Toby! Toby was kind enough to come to my birthday party a couple of weeks ago. He’s lovely, although I think he was involved in some ‘Dad dancing’ at some point.

When Frazer Hines tells us the Quarks couldn’t move “any quarker”, Sue decides to go one better.

Toby tells Frazer and Wendy he recently watched all the Patrick Troughton stories in order. He describes the experience as “hefty”.

Sue: That’s one word you could use.

Sue: Is this what I sound like every episode?

And then something awful happens.

Sue: What did she just say? There’s a story with 10 episodes?! TEN EPISODES!?
Me: Don’t worry, it’s a very good story and…
Sue: TEN EPISODES!!

The commentators lament the fact that people tend to dismiss black and white television programmes far too easily.

Sue: I’m sorry, Toby, but you can’t compare The Dominators to Citizen Kane. You’re being silly, now.
Me: Although, to be fair, they also mention Some Like It Hot, and you could definitely make a case for that.

And then, after a giant walnut crushes a Quark to death, Wendy and Frazer discuss their plans for leaving the series with Patrick Troughton.

Sue: So is this when Patrick Troughton decided to quit? That would explain a lot, actually.

We revert to the regular soundtrack for the final episode, and we’re immediately treated to Rago and Tabo arguing again.

Sue: The easiest way to defeat a Dominator would be to tell him he’s left his oven on. He’d be off like a shot.

When Nicol accidentally returns to the living room, she’s flummoxed by the first line of dialogue she hears.

Nicol: How are they going to destroy a subatomic elementary particle?
Me: What?
Sue: Now it’s Jamie’s turn to look up Cully’s dress. If there’s one thing that sums up The Dominators, it’s men looking up other men’s skirts.
Nicol: I don’t understand why they’ve called them Quarks. Hang on… Yes, according to Wikipedia, the particle was physically discovered in 1968. When was this made?
Me: August 1968.
Nicol: Well, that explains it then. It could have been worse, they could have called them Bosons.
Me: Nicol, please go away – I don’t want you to see this. It’s embarrassing enough as it is.

Nicol isn’t listening. She’s too busy laughing at the Quarks.

Nicol: They look like they’re hugging themselves.
Sue: Hang on a minute. Why can’t that Quark see Jamie standing behind it? I thought the spikes on their heads were its eyes! I thought they could see all around them. And now it turns out their peripheral vision is just as bad as everybody else’s! 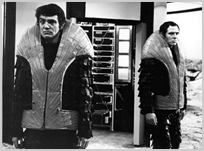 Another row breaks out between Toba and Rago.

Sue: He’s going to start withholding sex from Mad Michael Moon if he doesn’t buck his ideas up. And what makes this even more disturbing is the Dominator from Crossroads looks like Gary Glitter.

The Doctor knocks up some anti-Quark explosives, and Jamie and Cully begin lobbing them at the little fellas. As long as the Quarks don’t climb up the hill after them, they’ll be fine.

Sue: They can barely move on flat ground! Do me a favour!

The Dominators drop a bomb, the Doctor catches it, and then somebody else starts running with it like it’s a rugby ball.

Sue: Who the hell is THAT?
Me: It looks like they got Paul McCartney in to double for Pat Troughton. That can’t have been cheap.

The episode concludes with a very large explosion, which is then followed by an even larger sigh.

Sue: Well, that was dreadful. Just dreadful.
Nicol: It was pretty bad.
Me: Shut up, Nicol. This has nothing to do with you.
Sue: Leave her alone. It’s not her fault we had to watch The Dominators. I’d give it a big fat zero, but since the Doctor was actually in that one, I’ll give it:

I wanted to show her a documentary that explained how they made The Dominators, but Sue remained adamant that she “couldn’t give a **** who Norman Ashby was”. Oh well.

Sue: That’s quite enough dominating for one night, thanks.