A mysterious object is hurtling through space.

Sue: It’s a bowling pin with a mushroom on top.

The camera moves behind the spacecraft.

Sue: Actually, it doesn’t look that bad from this angle. It’s very organic, like Kosh’s ship in Babylon 5.

But something extremely odd is travelling on this ship.

Sue: What’s with all the meatballs? 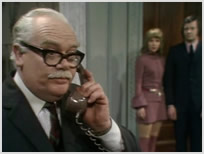 As the Tory MP blusters around UNIT HQ like a demented pit bull terrier, Sue tunes out and concentrates on Jo Grant’s outfit instead.

Sue: She looks very prim and proper this week. She may even be wearing a bra. Her skirt is ridiculously short, but I love her pink boots.
Me: If you keep your eyes open, you’ll get see her knickers later.
Sue: Trust you to notice something like that.

Sue: It’s Kenny Bottles!
Me: Who the hell is Kenny Bottles?
Sue: When I was a kid, probably when this first went out, Kenny Bottles would come down our street every Friday to collect everyone’s empty pop bottles so he could get the deposit money back from the local shop. And he was the spitting double of this bloke, here. He had a bike, as well. I would tease my younger brother, Kenny, by calling him Kenny Bottles. It used to make him cry.
Me: Ooh arrr!

As the Axon ship heads towards Earth, the military try to shoot it out of the sky.

Sue: I’m on the Doctor’s side this week. I’d be a pompous git as well if I was surrounded by these idiots.

And then Sue’s mood becomes quite pensive.

Sue: Has this story got a good reputation with the fans?
Me: Stop asking me that. Make up your own mind. I wouldn’t want anyone to accuse me of leading you.
Sue: I’d like to see you try. 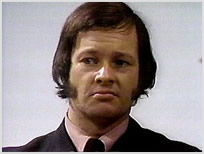 An American agent named Bill Filer is searching for the Master.

Sue: Is he supposed to be the American Gene Hunt?
Me: I like to think of him as the 1970s Jack Bauer.
Nicol: I wouldn’t want to watch 24 hours of this!
Me: Oh hello, Nicol. Actually, you should probably stick around for this story – it features a particle accelerator.

Nicol is just in time to witness the Doctor patronising Jo.

Sue: So when does feminism turn up in Doctor Who? Jo has saved the Doctor’s life several times now. He should be begging her to come with him instead of being such a sexist pig. And just as I was starting to like him.

The Axon ship has buried itself deep within the Earth, and when its sphincter-like doors are opened, Sue raises a quizzical eyebrow.

Sue: The alien ship is basically a cross between a giant penis and a giant arsehole. Freud would have had a field day with this.

But if the exterior of the ship is a bit weird, that’s nothing compared to what’s waiting inside.

Sue: Well, they’re trying, I’ll give them that. It reminds me of the textile aisle in Ikea. It’s probably the curtains that do it.

And then Sue is reunited with an old friend. 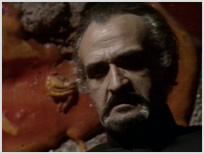 Sue: Not the bloody Master again!
Nicol: The gold people look like they should be standing around Covent Garden or Piccadilly Circus. They’d make a fortune.
Me: Don’t worry, a particle accelerator will be along shortly.

The Axons have arrived on Earth bearing the gift of Axonite, a mineral that can supposedly eradicate famine forever, a claim they back up by growing an enormous frog.

Me: The French would bloody love that.
Sue: That’s a bit racist.

When the Axons’ true form is finally revealed (if you can ignore the first few seconds of the episode, that is), Sue isn’t impressed.

Sue: It looks like an explosion in a spaghetti factory.

Nicol: So where’s this particle accelerator?
Me: Stick with it, Nicol.

The Master and Filer agree to join forces so they can escape from the Axon ship.

Sue: It looks like they’re trapped in the world’s strangest brothel.

Chinn orders the British Army to place UNIT under arrest so he can secure exclusive distribution rights for the Axonite.

Sue: You can’t arrest the Brig! What’s he playing at? And why is this location full of ticking clocks?

We discover that the Master was working with the Axons before they double-crossed him.

Sue: The Master is making a habit of this. He’s very naive, isn’t he? I almost feel sorry for the daft arse. 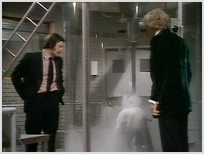 Nicol howls with laughter when she finally claps eyes on the cyclotron (“It’s a shower cubicle!”), and the meter that measures the speed of light is hilarious, apparently.

Nicol: To be fair, this is years ahead of its time. This sort of science is still cutting edge today.

The power complex’s head of research demands to know when the Doctor was last published.

Me: Typical academic. I’ve been to conferences like this.

The Doctor wants to take a look at the Axonite, just in case he can use it to fix his TARDIS.

Sue: This Doctor never does owt for nowt. There always has to be something in it for him.

Filer is gripped by the cuddly claws of Axos.

Sue: Did Filer just fart, or is Dudley Simpson resting on his keyboard again?

And then, because this isn’t weird enough already, the eye of Axos puts in an appearance. 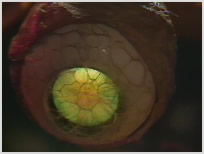 Sue: That doesn’t look anything like a giant penis. No, not at all.

The Master begs the Axons to let him have his gun back.

Sue: The Master has a laser gun! He’ll be asking the Axons for his ball back next.

The Master sneaks away with all the finesse of a cat armed with a laser gun.

Sue: The Master is much more exciting to watch than the Doctor. He’s having his own little adventure this week. It’s certainly more engaging than the Doctor bickering with a bloody academic.

Sue: Mind control: check. Okay, so when does someone fling themselves off a high wall?

The Doctor places some Axonite in the cyclotron. The needle on the speed of light meter begins to rise.

Nicol: The Doctor has just created a tachyon.
Me: That’s my favourite theoretical particle.
Sue: It’s a very wobbly set. That was pretty bad, actually. That’s shoddy workmanship, that is.

As the Axonite overloads the cyclotron, Winser hurls insults at the Doctor.

Our heroes are surrounded by spaghetti-Axons.

Sue: I really like this story, but the production values are letting it down. I bet this would be really good if they made it today. Properly, I mean.

The reprise from last week just gives Sue another opportunity to criticise the proto-Axon crawling across the floor.

Sue: You can tell it’s some poor sod with a blanket over him.
Me: As opposed to the BBC employing a real alien, you mean?

A cushion sails over my head. Her aim is almost as bad as Benton’s.

Sue: The monsters are rubbish, but at least their weapons are effective. I’ll give them that.

Sue nods appreciatively as Chinn is bollocked by his superiors.

Sue: I know I’ve been banging on about the Doctor being a bit of a Tory, but this story is definitely anti-establishment. The British government (who are clearly Tories) are obviously the bad guys, and incompetent bad guys at that. It’s swings and roundabouts, I suppose, but I definitely prefer the Doctor in this story. Having said that, his hair is very bouffant this week. He’s obviously just had a shampoo and set.

The Master infiltrates the Nunton Complex disguised as an army general.

Sue: Oh, that’s rubbish. His mask looks exactly like him, so why even bother? I bet he isn’t called the Master because he’s a master of disguise, that’s for sure. 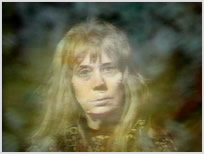 When the Doctor refuses to cooperate with the Axons, they retaliate by aging Jo Grant to death.

Sue: The Doctor is terrified that he’ll end up with an old woman for a companion. He’s ageist as well as sexist.

UNIT try to disable a spaghetti-Axon – and fail miserably.

Sue: The Axons look ridiculous, but they don’t half kick arse.

The Brigadier and the Master are forced into an uneasy alliance.

Sue: I think I’d prefer to see the Master working with UNIT than the Doctor. They should swap roles. I’m always disappointed when we cut back to Pertwee gurning in a chair.
Me: Look! It’s Jo Grant’s purple knickers!

A cushion hits me square in the jaw. And then the Master tries to blow up the Axons’ ship, even though the Doctor and Jo are still inside.

Me: You didn’t have a lot to say about that episode.
Sue: That’s because I liked it.
Me: Well, in that case we’ll be lucky if we get a couple of sentences out of you when we reach Tom Baker.
Sue: I wouldn’t count on it, love. 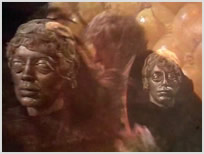 Me: The Doctor just slapped Jo across the face. Don’t you want to say anything about that?
Sue: I missed it. All I can see are BAFTA trophies floating across the screen. I bet this would be great if you were on drugs.

The eye of Axos methodically spells out the plot.

Sue: The best thing about this story is the lead Axon’s voice. I can actually understand it, instead of it being some electronic nonsense I can barely make out. This is much more scary. It’s so calm.

As the particle accelerator threatens to overload, the head of the power complex bravely prepares to enter the chamber.

Sue: He’s going to need more than a pair of oven gloves to deal with that.
Me: It Ain’t Half Radioactive, Mum.

The Doctor makes a deal with the Master.

Sue: The Doctor must be pulling the Master’s leg. Because he won’t run away and leave everyone to die, will he? Actually, he’s done it before… 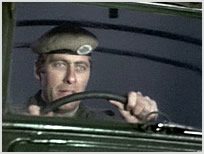 Yates and Benton are attacked by the Axons as they hurtle down a country road in a Jeep.

Sue: The Axons are a big fat mess. Run them over!

Benton sacrifices the Jeep by tossing a grenade into the back seat.

Sue: What a waste of a good Jeep. I’d love a Jeep like that. In fact, what I’d really like is a Land Rover Defender.
Me: Put one on your Amazon wish list.
Sue: Dudley Simpson should put some music lessons on his Amazon wish list. It sounds like a small child has been let loose on a Bontempi organ.

Sue is so gripped by the story’s climax, she stops talking for several minutes, and it’s only when she notices that the TARDIS has suddenly started doing what the Doctor tells it to that she finally breaks her silence.

Sue: Has the Master fixed the Doctor’s TARDIS for him? That definitely shows the Doctor up.

The Nunton Power Complex explodes and both Jo and the Brigadier are mightily relieved when the TARDIS rematerialises again.

Sue: Does that mean the Doctor can fly his TARDIS properly now? He can go wherever he wants? It’s about time!

Sadly, the Doctor is now some sort of galactic yo-yo.

Sue: I enjoyed that. The plot was interesting – it would definitely work again today – and the direction was pretty good, as well. The special effects let it down a bit, but at least they were trying something different for a change. I didn’t mind that one at all, mainly because it didn’t outstay its welcome. I’ll give it: