Sue didn’t even try to hide her excitement when she clapped eyes on the DVD’s episode selection screen.

Sue: Only two episodes? I’m in heaven!
Me: I’ll tell you what, Sue, if you can guess what makes this story interesting from a production point of view, I’ll give you a foot rub.

You’ll be pleased to know that I distracted her during the title sequence. “Could you pass me the lighter, love?” seems to work every time.

Sue: It’s on location, so I like it already. Are we in the Lake District?
Me: Dartmoor.
Sue: Very nice. I wish they could all be like this. It makes all the difference, you know. 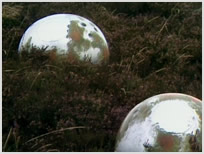 Our heroes materialise in a circle of silver spheres.

Sue: Is it the Yeti?

Sue is once again drawn to our heroes’ choice of outdoor clothing.

Sue: I love Harry’s duffle coat. It’s a classic. And believe it or not, I had an anorak like Sarah Jane’s, but mine was bright orange.
Me: Lovely.

The Doctor repairs the Ark’s faulty T-Mat terminal while Harry and Sarah explore what used to be London town.

Sue: They should have gone for a Planet of the Apes moment here. They could have bought a cheap model of Nelson’s Column and they could have buried in some mud and filmed it with forced perspective. It would have looked great. They missed a trick. Barry would have CSO-ed it in, I’m sure of it.

Harry goes careering down a ravine.

Sue: I hope he doesn’t ruin his coat.

A group of human astronauts are also wandering around the planet’s surface.

Sue: Are they South African? If this was made in the 1970s, then they must be the bad guys. 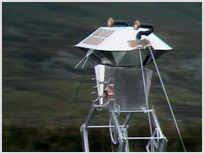 One of them is being hunted by a robotic contraption.

Sue: What the hell is that supposed to be? Is this another replacement for the Daleks? They haven’t got a clue, have they? It’s not a very practical design for knocking about on the moors and zipping between rocks, is it?

Meanwhile Harry is still stuck in a hole.

Sue: Harry is useless. He could at least try to climb back up. That slope doesn’t look very steep to me. Is he always this pathetic, Neil? And he’s completely ruined his coat. He’ll never get those grass stains out.

The astronauts capture and interrogate the Doctor, and an alien with stubby fingers monitors the situation from afar. 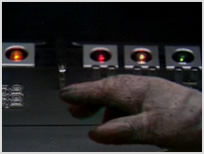 Sue: Am I supposed to recognise who that is from their hand?
Me: Technically, that hand should be no help to you whatsoever.
Sue: What’s this story called?
Me: Er… The Rocks of Doom.
Sue: It looks like a lovely place to go for a walk. Were there any Doctor Who tours on the moors in the 1970s?
Me: No. And have you noticed anything remarkable about this story yet?

After a very long pause…

Sue: Is this shot entirely on location? On video?
Me: That’s right! Well done. They shot it with an Outside Broadcast unit.
Sue: Did they really? That is interesting.

She isn’t being sarcastic. Honest.

Sue: It looks great. All the episodes should be made like this. It feels very modern.

Parked not too far away is a spaceship with a very familiar design. 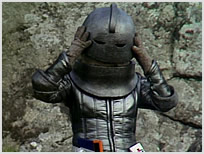 And then, after an even longer pause…

The ship’s occupant removes his helmet.

Sue: That’s it! Sontarans! I love the Sontarans.

Sarah believes the Sontaran is none other than Linx from The Time Warrior. In fact she reckons they’re identical. 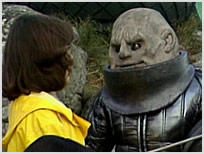 Sue: They aren’t identical. This one doesn’t look half as good as the one we saw before. The mask is cheaper and less detailed.
Me: They don’t even have the same number of fingers! You’d have thought that a script which included references to the Sontarans being identical clones would have resulted in costumes and masks that were identical. But, no.
Sue: I do like the Sontarans, though. They’re a great idea, and very iconic. Some of them are capable of being good guys, you know.

And then Sue notices that there’s a problem with the show’s star.

Sue: Is it just me or does Tom Baker look a bit pale?
Me: He isn’t feeling very well.
Sue: Is he hungover?
Me: He’s probably in agony; he broke his collarbone when they were making this episode. The drugs probably haven’t kicked in yet.
Sue: The poor thing.

Sue winces in sympathy every time Tom Baker moves from now on.

Sue: This must have been cheap to film. No sets at all, really. Just some found locations, a couple of props and a few costumes. It’s the sort of thing fans could make during a spare weekend.
Me: Oh, believe me, Sue, they have.

This particular Sontaran, whose name is Styre, subjects Sarah to a series of horrific hallucinations. 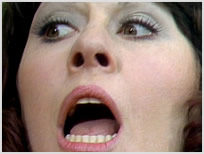 Sue: Elizabeth Sladen is great when it comes to being terrified. I’m not sure what this does for Sarah Jane’s feminist agenda, but she has that rabbit-caught-in-headlights look down to a fine art.

Harry rescues an astronaut who’s been tied to a rock.

Sue: I’m beginning to like Harry. He’s not as useless as I first thought. At least he’s trying to be brave and resourceful. It’s the stupid dialogue they keep giving him that lets him down.

We learn that Styre has been experimenting on humans in order to analyse their weaknesses, and one poor sod spent nine whole days chained to a rock without any water.

Sue: This is a bit grim, isn’t it?
Me: If I remember correctly, the book is even more extreme. The actor who plays Harry – Ian Marter – novelised this story, and because the episode was so short, he padded it out with endless scenes of pain and torture. Perfect for young children.

Styre’s latest wheeze involves seeing how long two men can hold a weight over a colleague’s rib cage without dropping it, even though the colleague has betrayed them. It’s very intense.

Meanwhile the Doctor is forced to deal with the Sontaran’s robot sentry.

Sue: I still don’t like the Sontaran’s sidekick. I guess it must have come flat-packed with the ship. I bet it took him ages to assemble it. It looks like a cross between the Martians from The War of the Worlds and the robots from the Smash potato adverts.

A Sontaran invasion fleet is waiting for Styre to file his report. 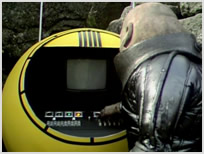 Sue: This is bit far-fetched. There’s nobody to invade! Who cares if the humans are frightened of snakes if there’s only five of them left? This makes no sense whatsoever.

After a bollocking from his superior, Styre returns to his fiendish experiments.

Sue: This isn’t really an experiment at all – it’s just torture for the sake of it. If he really wanted to know how resilient a human’s ribcage was, he’d drop the bloody thing on him.

The Doctor challenges Styre to a fight.

Sue: That isn’t Tom Baker, but they’re making the best of a bad situation, I suppose. This would be an easy fight to recreate in the school playground as well – you just have to flail around a bit.

Completely exhausted, Styre returns to his ship to take care of some urgent business.

Sue: He desperately needs a poo.

Styre exits his ship, doubled-up in agony. And then he slumps against some rocks and slowly deflates. 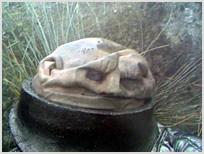 Sue: We didn’t need to see that. Not only did that look silly, I’ll always think the Sontarans are made from balloons, now.

Incredibly, it was Harry who saved the day.

The Doctor tells the Sontaran invasion fleet to sod off.

Sue: That was either a satire about red tape or a really stupid thing to do. What if they’d called the Doctor’s bluff? Who’s going to stop them? I don’t buy it.

Sue: I can’t believe I’m going to say this, but it was too short.
Me: You must be kidding.
Sue: It was over before I could get into it. Don’t get me wrong, there was a lot that I liked about it – the pace, the location, Tom Baker – but there were a lot of things that I didn’t like as well. The plot was terrible, it was impossible for me to care about the guest characters, and it felt cheap. The set-up was good, but the second-half didn’t deliver. I bet I won’t remember it tomorrow.

Sue: Do they ever make Doctor Who stories in three episodes? Because that would be perfect.