The Doctor and Sarah are exploring the TARDIS when they stumble across its boot cupboard.

Sue: So that’s where the Doctor keeps his own chroma studio. Look at all that lovely CSO. 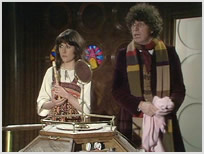 Sue isn’t impressed with the Doctor’s housekeeping, either.

Sue: He could do with a part-time cleaner. Look at all the dust on his round things.
Me: Roundels.
Sue: It bet he hasn’t been down this corridor with a hoover in centuries.

The Doctor and Sarah stumble into the secondary console room, which Sue adores. But of course she does, it’s made of WOOD!

Sue: It’s very cosy. I love the stained glass. This suits Tom Baker down to the ground.

Sue picks up on the reference to Patrick Troughton when Sarah finds a recorder, and she’s convinced that the dusty, pink shirt once belonged to Jon Pertwee, but before we get can into why we haven’t seen this room before – especially if all the other Doctors have used it – the TARDIS is attacked by an unseen force.

Sue: Nice camera movement. Have the BBC actually splashed out on a jib? 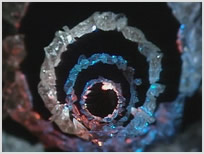 The TARDIS hurtles down a crystalline tunnel.

Our heroes step into a black void, and when a ball of red light suddenly appears, they hide behind the TARDIS to escape its attention.

The Doctor warns his companion about the dangers of Helix energy.

Sue: Yes, and it just flew straight into your TARDIS, mate.

As the TARDIS leaves the Helix behind, the sound of demonic laughter rings out.

Sue: Is it the Master?

Sue: I’ll probably like this one. Nice location. Period costumes. You know, Neil, real things. I like the historical ones.

When Count Federico enters the town of San Martino on horseback, Sue knows exactly where this story takes place: Wales. 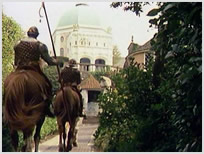 Sue: Is this Portmerion?
Me: I am seriously impressed, Sue.
Sue: You’ve made me watch The Prisoner more times than I care to remember. The building with the green dome is what gave it away. I’m surprised you haven’t dragged me there for a holiday.
Me: I’ll take you as soon as this is over. We can re-enact scenes from this story if you like.

Sue gives me one of her looks.

Sue: Yeah, it could be part of our ongoing counselling, along with you burning your Doctor Who DVDs on a bonfire. I’m looking forward to it.

Count Federico and the young Prince Giuliano are bickering over the body of a recently deceased Duke. The court astrologer, Hieronymous, insists their ruler’s death was foretold in the stars.

Sue: Giuliano doesn’t sound like a British name to me.
Me: Maybe that’s because we’re in Italy.
Sue: Oh, well in that case, why isn’t anyone speaking with an
Italian accent? That’s a bit lazy, isn’t it?

Sue: The bloke with the ginger hair doesn’t look very Italian, either. He looks Scottish to me. Who cast this? 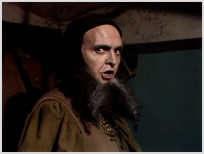 Sue: Hieronymous can’t be the Master. The Master wouldn’t be seen dead with a beard like that.

The TARDIS materialises in a nearby wood, and it takes all of 30 seconds for Sarah to be kidnapped.

Sue: That has to be a new record.

The Doctor intervenes, but he’s rendered unconscious with a blow to the head.

Sue: That was a canny thump. I wouldn’t be surprised if that gave him brain damage.

With the Doctor out cold, the Helix energy emerges from the TARDIS.

Sue: I knew it! This is what happens when you don’t shut the bloody door. I’m surprised it doesn’t happen more often.

It doesn’t take long for an innocent bystander to die horribly.

Sue: This is the Doctor’s fault. What a berk.

The Doctor comes to his senses and runs into Captain Rossini and his horsemen. They threaten to arrest him, so he spooks their horses with a football rattle. Then he steals a horse and rides off.

Sue: That isn’t Tom Baker. The wig isn’t quite right. He looks more like Malcolm McLaren.

Sarah is brought before the cult of Demnos.

Sue: Hang on, is this a sequel? Isn’t there a Jon Pertwee story called The Demnos? It really is the Master, isn’t it? 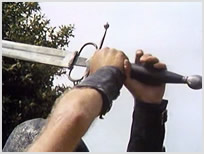 Count Federico sentences the Doctor to death for spying.

Sue: Nice cliffhanger. I like the way the executioner moved his arm in time with the theme music. Who directed this one?

Sue: Rodney Bennett. That name rings a bell.
Me: Well, aside from directing The Ark in Space and The Sontaran Experiment, he also shares his name with a rival school in Grange Hill, but since you never watched that, you’re probably mistaking him for the composer Richard Rodney Bennett. Either way, this conversation is going nowhere. 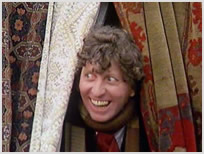 The Doctor escapes execution, mainly thanks to his scarf.

Sue: That was fun. A bit silly, but fun.

The Doctor flees through a market.

Sue: This looks great, but the white cladding on that wall isn’t right for this period. They’re trying to hide it behind some material, but the wind’s blown it away. What a shame.

The Doctor follows a man dressed in a purple cloak and a gold mask through the catacombs.

Sue: Could this bloke walk any slower? Has he got sciatica or something?

Sarah is definitely going to be sacrificed. Honest.

Sue: She’s been lying on that table for hours. They’ve been waving a knife above her head for so long now, she’s actually bored. She should have been killed ages ago. And why do the bad guys always have to do a little dance first?

The Doctor drags Sarah away from the sacrificial altar.

Sue: They’re trying to lighten the mood with comedy parp-parp music. Wow.
Me: Comedy parp-parp music? That’s classic Dudley Simpson!
Sue: (Ignoring me) Marco and Giuliano are definitely a couple. The first thing Giuliano should do when he’s in charge is change the same-sex marriage laws. 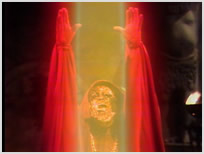 Back in the catacombs, a booming voice gives everyone the willies.

Sue: The alien talks as slowly as this bloke walks. They are the perfect couple. If they did everything at normal speed, this episode would only be 10 minutes long.

Aside from that, I can tell Sue is enjoying The Masque of Mandragora.

Sue: It looks good, the performances are interesting, and the plot is reasonably straightforward – although I haven’t got a clue what Helix energy is supposed to be, or what it wants. But that’s okay.

The Doctor races back to the catacombs.

Sue: I keep expecting him to run into Patrick McGoohan coming the other way.

The episode ends with Sarah back in the cult’s clutches.

Sue: I enjoyed that.
Me: You didn’t say a lot.
Sue: That’s because I’m enjoying it too much. Sorry. 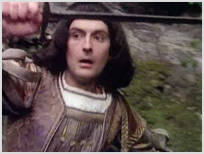 The Doctor is attacked by a strange noise in the catacombs and it’s up to Giuliano to keep four swordsmen at bay.

Sue: Come on! They could take him. Look at him. He looks like he’s never picked up a sword before.

Sue: Malcolm McLaren is back. This sword fight isn’t very good. Either the stuntmen are rubbish or the guards are rubbish. Either way, their hearts aren’t in it.

Sarah is bound and gagged and taken to Hieronymous’ chambers, where the mad astrologer holds a vial under her nose.

Sue: Is he going to waterboard her?

Sue: He needs to work on his management skills. Calling someone a “dung-head” isn’t going to do him any favours in the long run. I bet he stabs him in the back at the end.

Once again, Sue falls under this episode’s spell, and it takes something really special to provoke a reaction out of her. Like Dudley’s obsession with vibraslaps, for instance.

Sue: Are these catacombs infested with rattlesnakes? 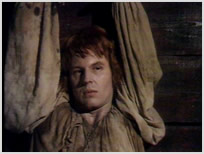 Sue: Marco will never lie about Giuliano. He loves him too much for that. This is quite touching, actually.

The Doctor is apprehended by Rossini’s men, despite putting up quite a fight.

Sue: Jon Pertwee would have been proud of that kick to the face.

The Doctor is chained to a wall next to Sarah. He says he knew Sarah was under Hieronymous’ hypnotic control because she asked him how she could understand Italian when she knows full well that it’s a Time Lord gift he shares with her.

Sue: I thought the TARDIS did that? That’s a bit vague.

Federico unmasks Hieronymous, who turns out to be a monster with a burning sun for a face. 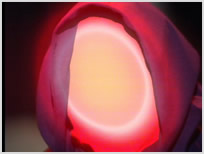 Sue: Very good.
Me: Really? I’m surprised.
Sue: It’s pure energy, isn’t it? What do you want it to look like? It makes sense to me, and it doesn’t look too silly. It’s quite unsettling, actually. I’m enjoying this.
Me: I know. You hardly said a word again.
Sue: It’s good! What more do you want me to say?

Nicol is pestering us to watch the latest Game of Thrones.

Me: You’ll have to wait. We have to watch this episode of Doctor Who first.
Sue: You’ll like it, Nicol. It’s a bit like Game of Thrones.
Nicol: Yeah, of course it is.
Me: Although with less incest.
Sue: Yeah, but just as much homoeroticism.

Nicol wants to know why Sarah is auditioning for a role in The Sound of Music. And then she starts rambling on about Sarah’s clothes, but this was so mind-numbingly boring, I couldn’t bring myself to take notes.

Sue: It’s a lot scarier when the villains are real people. I’ll take a mad monk in a mask over a plastic monster any day of the week.

Me: No. But his mum will be along in a couple of weeks.

Hieronymous fires Helix energy out of his fingers.

Sue: George Lucas must have seen this. The villain even wears a mask.

The Masque’s attendees are struck down by energy bolts.

Sue: Have all the best minds in Italy just been killed? That can’t be good, can it?

It turns out the Doctor was impersonating Hieronymous the whole time.

Sue: Since when has he been able to do that? Is he an intergalactic Mike Yarwood, now?
Me: You should hear his Davros, it’s hilarious. 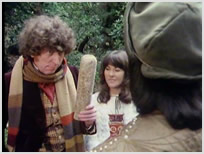 The Doctor leaves the planet with a grin on his face and some salami in his pocket (a reward for saving the world).

Sue: It’s more than he usually gets, I suppose.

The Doctor tells Sarah that the Mandragora Helix will attempt to conquer the Earth again at the end of the 20th century.

Sue: They’ve set it up nicely for a sequel.

Sue: That was very nearly the second 10 out of 10 in a row, but the ending let it down. It was a bit rushed and anticlimactic, although I’m getting used to that. I can’t fault the rest: great location, sets, costumes, performances, script. And the lighting was excellent, too. Yeah, I liked it a lot. It was very accessible, too. If only it had the same pace as The Seeds of Doom.