Sue: I am so ready for Peter Davison.
Me: We have to watch a Christmas special first.
Sue: A Doctor Who Christmas special?
Me: Well…
Sue: This had better not be a fan-thing which doesn’t count. I can’t be bothered with that. It’s not that Shada thing you keep banging on about, is it? Has it got anything to do with Ian Levine?
Me: Well…
Sue: Oh, just put it on. The quicker we do this, the quicker I can watch Peter Davison.

We all know how this begins…

Sue: What the hell is this?

Sue: Is this a spoof? I mean, is this actually real?

She soaks up the title sequence in shocked silence. 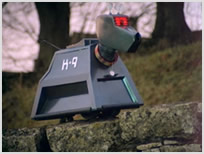 Sue: Stop the DVD. What the hell is K9 and Company when it’s at home?
Me: It’s a pilot for a series which would have featured Sarah Jane Smith and K9. Like that would ever work.
Sue: But it was never shown on television, right?
Me: No, it’s a real Christmas special.
Sue: Good Lord. Okay, if we really have to do this, can I watch the titles again? I couldn’t take it all in. I think I’m still in shock.

So we watch it again.

Sue: This is terrible. I love how they’ve run out of footage and they have to repeat the shots. Are you sure this isn’t taking the piss? You can see K9’s wheels when he’s on that dry stone wall. I thought he was supposed to hover?
Me: What do you think of the music?
Sue: It’s absurd!
Me: It’s by Ian Levine.
Sue: Is this why Doctor Who fans don’t like Ian Levine very much?

When we reach the end, Sue demands to watch it again.

Sue: I want to make sure it really happened. 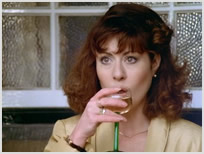 Sarah sips on her chardonnay, with a deadline fast approaching, probably.

Sarah jumps into her car.

Sue: It’s hard to believe now, but there was a time when Austin miniMetro cabriolets were very trendy. The second car I ever owned was a miniMetro. It was metallic brown with cream seats. It was a rust bucket. It wasn’t convertible either, although it did end up with a hole in the floor.

I pause the DVD.

Me: Is that enough?
Sue: More than enough. I’ve got it out of my system now, thanks.

K9 and Company begins with a pagan ceremony already in progress, which is led by a priestess wearing the head of a goat. 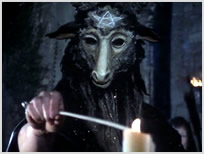 Sue: I can’t understand a word she’s saying. Not a single word. Take the mask off, dear.

We cut to a pair of gossiping middle-aged women.

Sue: I know what this is. This is a sequel to The Stones That Dripped Blood (sic). It’s got elderly lesbians in it and everything.

Sue: Lavinia is a proper smoker. Anybody who can talk with a cigarette dangling from their lips for more than 10 seconds really knows how to smoke a tab.

Sue: What is she wearing? Could she look more frumpy? Even the ridiculous jogging outfit from the opening titles would have been better than the brown sack she’s wearing now. 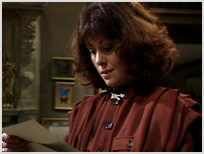 Sarah is greeted by George Tracy, who begrudgingly welcomes her to Moreton Harwood.

Me: Oh, it’s whatshisface from Eldorado. He was in EastEnders not so long ago. Sharon jilted him at the altar.
Me: It’s not Jesse Birdsall.
Sue: Yes it is.
Me: Okay, have it your own way. I don’t care.

Brendan and Sarah discuss the lost art of market gardening.

Me: What I don’t understand is why anyone thought it would be a good idea to set a TV series in the giddy world of market gardening.
Sue: Shhh, Neil. I’m interested in marketing gardening. Brendan’s right, it can be very scientific these days. 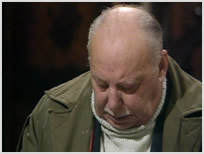 Back at Lavinia’s mansion, Brendan and Sarah are introduced to Colonel Pollock.

Sue: It’s Uncle Monty from Withnail and I. Which means Brendan is in all sorts of trouble tonight.

Juno invites Sarah to a get-together with the other villagers.

Sue: Is it Doreen’s sister from Birds of a Feather? I’m probably reading too much into this but she sounds like she could be a swinger. Or a dogger. Maybe that’s where K9 comes into it. Where the hell is he, anyway?

Commander Pollock warns Sarah not to get involved with Juno and her husband, Howard. “He’s so big, what he loses on the swings he gains on the roundabouts. And we haven’t got any roundabouts,” he explains.

Sue: That was code. If you know what I mean.

As soon as the Colonel leaves, Sarah and Brendan turn their attention to a large box that’s been gathering dust in an attic in Croydon.

Sue: They never got that crate into an attic in a million years. I simply refuse to believe that. 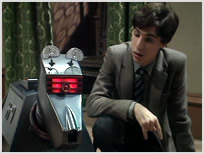 Sue: (As Brendan) Thanks. It’s just what I’ve always wanted.
Me: He probably thinks it’s the latest gadget from Clive Sinclair.

K9 is a gift from the Doctor.

Sue: That’s sweet. Did he give K9s to everybody that Christmas? Did Benton get one?

Brendan is very excited. Too excited, in fact.

Sue: This is basically Matt Smith 25 years too early. Did Matt watch K9 and Company when he was preparing for the role?
Me: I’m sure it was at the top of his viewing list.
Sue: Brendan just needs a bow tie and he’s basically the Doctor. Seriously.

Sue: We had a gas fire like hers while I was growing up. It’s making me feel quite nostalgic, this. I really like the locations in this one. They just need to speed up the plot. 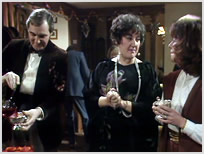 Sue: As soon as they’ve drained the punch bowl, they throw their car keys into it. They’ll all be after the keys to the miniMetro cabriolet, just you wait and see.

You can cut the sexual tension with an electric carving knife.

Sue: What time did this go out? Was it post-watershed?
Me: 5:45pm.
Sue: Jesus. What did the kids make of it?
Me: I remember being bored shitless by the whole thing. But I stayed with it to the bitter end. Through gritted teeth, probably.

The Tracys gang up and attack Brendan. So K9 stuns Peter and chases after his dad.

Sue has an issue with K9’s new sound effects.

Sue: The other K9s didn’t make silly tinkly noises. The Mark III is too noisy for me. I think the Mark II was the best model.

Meanwhile, back at the swingers party…

Sue: Is that Les Dawson eating a ham and cheese sandwich in the background?

George Tracy believes K9 is a fire-breathing hound, sent by the pagan goddess Hecate, but Peter thinks his father is crying wolf. The next morning, Colonel Pollock surveys the damage the devil dog has caused to a greenhouse. Yes, it really is that exciting.

Sue: (As the Colonel) We may be forced to camp!

Sue: This is quite interesting if you’re into this sort of thing. 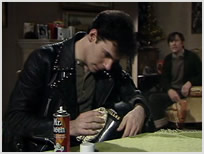 Sue: Mr Sheen. That’s early product placement, that is. And on the BBC, too. Dear me.

Sue: Never trust a man who tucks his jumper into his trousers.

Sue: Bloody hell. Sarah Jane just made a silk kimono look unsexy. This is her own series, for heaven’s sake. She should look fabulous! She’s had hundreds of costume changes and each one is even worse than the last. I know the 1980s wasn’t a great time for fashion, but this is bloody ridiculous.

Sue: She should call in a UNIT airstrike. That’ll teach ‘em.

As she leaves the station, Sarah bumps into Lily. 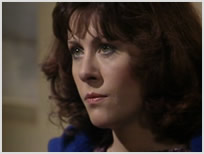 Sue: I like Lily from the Post Office. Would she have been a regular character if this had gone to a series, Neil? I bet she would have been Sarah’s best friend.
Me: That’s K9’s job. Didn’t you read the episode title? You saw it three times!

Sarah changes into another outfit.

Sue: Her coat looks like it used to be a continental quilt.

She sets off in her trusty miniMetro with K9 riding shotgun.

Sue: She should stick K9’s head out of the window. Dogs love that.

Sarah finds a dead copper in the middle of the road, which would be bad enough, but there also goats around these parts!

Sue: So the scariest thing in the episode is a goat. That says it all.

The ceremony gets underway.

Sue: So are they alien goats from the planet Goataloid or something? Is that it?

When Sarah heads to Juno and Howard’s for answers, Howard hands our heroine a soothing glass of Rohypnol.

Sue: Don’t drink it, Sarah Jane. The next thing you’ll know, there’ll be topless photographs of you in Readers’ Wives. 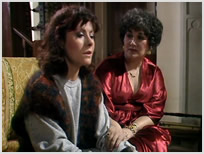 Sue: This isn’t even subtext any more.

The pagan ceremony is now in full (ahem) swing.

Juno offers Sarah a spot of dinner, and when she complains that she’s too tired, Juno promises to have her tucked up in bed before midnight.

Sarah and K9 search for the location where Peter’s sacrifice will take place.

Sue: The sun’s gone down very quickly.
Me: The sun doesn’t always shine on TV, Sue.

Howard arrives at the police station, only to find it devoid of life.

Sue: The bell in this police station sounds like a loud fart.
Me: Yeah, please stop honking, Howard. 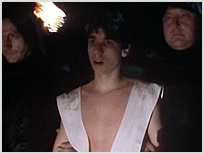 Brendan is prepared for a ritual sacrifice. Or a gang bang. It’s not entirely clear.

Sue: What is he wearing? Did John Nathan-Turner have anything to do with this?
Me: Yes.
Sue: I thought so.

But before the villagers can remove Brendan’s virginal white dress, K9 comes to the rescue.

Sue: You can hear K9 coming a mile off. Turn his notifications off, or put him into airplane mode, for God’s sake.

Sarah Jane uses her karate skills to kick the living daylights out of the coven.

Sue: No! I really liked her! She was the only decent character in the whole thing.
Me: And she would have gotten away with it if it wasn’t for that pesky dog.
Sue: So that’s it, then? No aliens? No mind-control involving pH levels or anything like that? They’re just nutters?

The episode concludes with Juno and Howard’s third party that week.

Sue: So they weren’t in on it, then? They were just weird sexual predators?

Sue has a question.

Sue: So what happened to Aunt Lavinia? Was she sacrificed to the giant goat god? 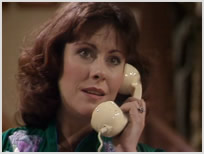 Right on cue, Sarah receives a telephone call from America.

Sue: So there was nothing wrong with her aunt? She was just gallivanting around America? What kind of mystery is that?

Sarah has some shocking news for her aunt.

Sue: The whole village is banged up in prison. Apart from a couple of swingers. 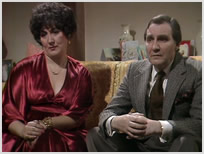 Me: So what mark are you going to give it?
Sue: I’m not going to give it a mark. That wasn’t Doctor Who.
Me: It was pretty close.
Sue: It was nothing like Doctor Who! There should have been some aliens instead of middle-aged swingers who were probably brain-damaged from all that interbreeding.
Me: Harsh.
Sue: I just want Peter Davison. Was there really any need for that? Why are we punishing ourselves like this?

I place the DVD back on its shelf.

Sue: If I had to mark it – which I’m not – I’d probably give it a three, but only because Sarah Jane and K9 were in it. I mean, there’s nothing wrong with the idea – they proved that 25 years later – but it just fell flat. Can we put Peter Davison’s first episode on now, please?
Me: Wouldn’t you rather watch Hot Fuzz instead?
Sue: And why would I do that?
Me: No reason. 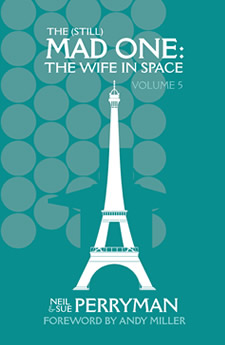