Sue: So what are you putting me through tonight?
Me: I’m going to give you a taste of just how desperate Doctor Who fans were in 1995.
Sue: A desperate Doctor Who fan. Sounds wonderful.
Me: I’m going to show you a fan film.
Sue: Haven’t I suffered enough?
Me: The fans grew tired of waiting for the BBC to bring Doctor Who back, so they did it themselves. Fans are like that.
Sue: But how could they afford it? Kickstarter didn’t exist back then. They must have had more money than sense. 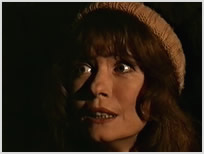 Downtime’s pre-title sequence takes place in a monastery in Tibet, where Victoria Waterfield has apparently gone on holiday.

Sue: Is that really Victoria, or is it somebody who just looks like her? They couldn’t possibly afford her, could they?

Sue: He was in All Creatures Great and Small last night. He was a very nice man who kept a stray dog. I like him already.

Sue and I are currently making our way through All Creatures… (Adventures with the Wife in Darrowby) in an attempt to cushion the comedown when this experiment finishes in a few weeks time. Although I am getting a little tired of her crying every time an animal injures itself, which is practically every five minutes.

Sue: It’s very nicely lit. There’s plenty of atmosphere, I’ll give it that.

A disembodied voice demands to be set free. 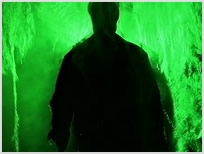 Sue: So that’s how they could afford to make this. Ian Levine. It all makes sense now. Good old Ian. At least he was trying, bless him.

Fifteen years later, on a houseboat…

Sue: Oh dear, this looks cheap. Is it shot on SVHS? It looks like we’re watching somebody’s home movie.

Kate Stewart is being hassled by Chillies.

Sue: What’s she got against them?
Me: They’re deranged students.
Sue: In that case I know how she feels. 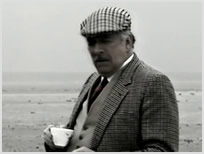 The Brigadier is visiting a beach on the astral plane.

Sue: Is it supposed to look like that, or is this a really bad copy, Neil?

The Brigadier finds a footprint in the sand.

Meanwhile, a DJ is spouting nonsense in East Anglia.

A student named Daniel Hinton logs onto the university server.

Sue: This is you in the university language labs in 1995, Neil. He’s probably on some Doctor Who forum complaining about there not being any new Doctor Who for him to complain about.

Sue: It’s Sarah Jane! Bloody hell, is everybody in this? Ian Levine must have been loaded. Oh no. Benton isn’t in this, is he? 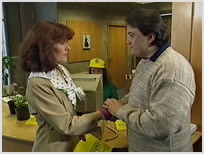 Sue: It’s Ian Levine! He’s cast himself in it!

Sue has some serious issues with Downtime’s sound.

Sue: They can afford all these guest stars, but they can’t afford a boom.

Victoria keeps a large silver sphere in a box on her desk.

Sue: Either that’s a really big worry ball, or it’s the Yeti. Their balls were well scary.

Daniel Hinton is browsing the university’s computer network when something rather strange happens.

Sue: One minute he’s on the internet, the next minute there’s white sticky stuff all over his fingers. This is definitely you in 1995, Neil.

Victoria tells Sarah that the university’s chancellor is currently off-site while he takes the path of truth.

Sue: Why can’t she just say he’s on sabbatical?

A Yeti sphere is sent after Daniel.

Sue: Balls that can move by themselves terrify me.
Me: Remind me never to show you Phantasm.

Sue: I haven’t got a clue what’s going on, but God bless them, they’re giving it a bloody good go.

The Brig is still teaching.

Sue: Did Doris chuck him out of his big house? Was he playing away from home again?
Me: That hasn’t happened yet.
Sue: Eh? 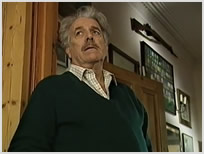 Sue: Does Benton want a chat? Is he lonely?

Kate Stewart is the Brigadier’s daughter.

Sue: Haven’t we met his daughter before?
Me: Yes, quite recently, in fact. She’s played by Jemma Redgrave now, and she works for UNIT. She’s in the 50th anniversary special.
Sue: So does this count, then?
Me: It counts as much as you want it to, love.

When Victoria walks into the university’s computer lab, the students stand up and applaud.

Me: Is this what happens when you walk into your lectures, love?
Sue: (Ignoring me) I don’t like this Christopher person. He isn’t played by a great actor. He must have put loads of money into this. It’s the only explanation I can think of for him being in it.

Me: (Pointing at Geoffrey Beevers) That’s the Master.
Sue: Is it?
Me: He played the Master when he was a decaying mess, and his TARDIS was a statue that could sit down and fire laser bolts from its eyes. Do you remember that?
Sue: Yes, I do, actually. So is he the Master?
Me: No. 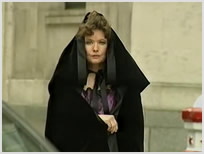 Victoria visits the Brigadier on the astral plane again.

Sue: Did Scottish Widows put some money into this? Is this early product placement?

And then the Brigadier shoots an imaginary Yeti in the face.

Back in East Anglia, the real Victoria is having to deal with Christopher.

Sue: You can’t have a villain in a ****ing jumper! If you’re going to take over the world, you can’t wear a crap jumper from Primark. Make an effort, man.

Professor Travers has returned from the dead.

Me: He was in The Abominable Snowmen and The Web of Fear. Remember?
Sue: Not really. Oh, look – people queuing for a phone box. You never see that any more.

Sarah Jane doesn’t understand what the Yeti have to do with this.

Sue: Sarah Jane never met a Yeti, did she?
Me: Maybe the Doctor told her about them over tea and crumpets one night.
Sue: Or maybe the Brigadier kept banging on about them. I bet he did, you know.

The Brigadier is accosted by some Chillies, and when Geoffrey Beevers’ tramp comes to the rescue, there’s a case of mistaken identity. 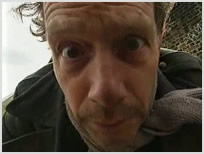 If I showed her the version of Downtime where Sylvester McCoy does turn up, she’d probably kill me. That’s if Ian Levine didn’t get to me first.

Sue: Kate’s houseboat is lovely – very cosy. Could you live on a boat like that, Neil?
Me: You’ve made me live in worse places.
Sue: Wrong answer.
Me: I’d live anywhere with you, love.
Sue: Better.

A Yeti appears on the boat and all hell breaks loose.

Sue: This must have been a nightmare to direct. The Brigadier’s head is practically touching the ceiling!

The Yeti leaves with the Locus.

Sue: Aww. He just wanted his toy back.

Kate tells the Brigadier that he’s a grandfather.

Sue: This is basically an episode of The Jeremy Kyle Show set on a barge. 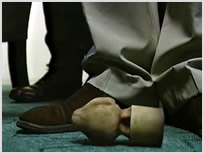 Christopher stamps on the Locus.

Sue: He’s not even wearing decent shoes, for ****’s sake. So is the Great Intelligence free now?
Me: I don’t know.
Sue: What do you mean, you don’t know?
Me: I’m completely lost. Sorry.
Sue: You will be.

Sue: It’s odd that she seems to resent her dad for working for UNIT, and yet she ends up working for them herself. How does that happen? And does this mean she’ll end up doing to her son what he did to her?

The university’s computer lab is overrun with cobwebs and comatose students.

Sue: This is what it used to look like when you finished one of your lectures, love.

The Brigadier and Daniel reach the bowels of the university.

Sue: Why hasn’t the Brigadier said, “I wish the Doctor would pull his finger out and help us” yet?
Me: I don’t think they’re even allowed to say his name.
Sue: He could say, “I could do with a madman in a blue box right now”. You can’t copyright that, surely.

UNIT engage the Yeti on the university’s lawn. 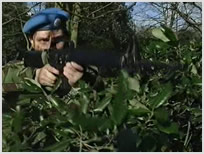 A UNIT solider is killed.

The Brigadier is captured by the Great Intelligence, but he still manages to give Sarah the instructions she needs to save the day.

Sue: The Brig is basically playing the part of the Doctor in this. I can live with that. You know, I’m quite impressed with the direction. There are loads of extras, and these camera moves are very nice. It’s just a shame about the plot. 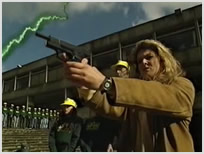 Sue: So this is where she gets her taste for guns. Okay.

Christopher is killed by a Yeti, who is actually Daniel. (Oh do keep up.)

Sue: Don’t wear a suit to his funeral. Go in a crap jumper.

The Great Intelligence has been defeated.

The Brigadier and Sarah are reunited.

And Victoria returns to her university.

Me: She’s got a Quality Assurance Exercise next week, poor cow. 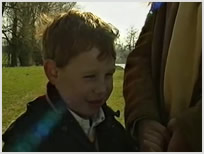 The film ends with the Brigadier meeting his grandson, Gordon.

Downtime is dedicated to Douglas Camfield.

Sue: Poor Douglas. God knows what he would have made of that.

Sue: That wasn’t too bad. It was a good effort. If I was marking that as a student film, I’d probably give it a high 2:1. I’d have to knock some marks off for the bad sound, the terrible acting and the awful script, but it was a bloody good attempt. And it was lovely – if a bit sad – to see the Brig and Sarah Jane again.
Me: Are you going to give it a mark?
Sue: Does it count?
Me: Sort of.
Sue: In that case I’ll sort of give it:

And speaking of unexpected treats…