Against everyone’s advice, except for some divorce lawyers who contacted us last week, our adventure continues with a reconstruction.

Sue is initially perplexed by the experience.

Sue: It looks like a normal episode to me. This isn’t so bad. I don’t know what all the fuss is about.
Me: This is the recap from the last episode, love. 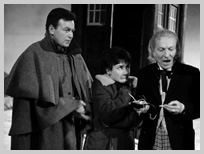 Five minutes into the reconstruction proper, I ask her how she’s coping. She’s been very quiet so far.

We used to live in a caravan (for three and a half years – it’s a long story).

Sue: I’m actually enjoying this much more than some of the others I’ve seen. It’s a lot faster.
Me: The original version is a lot slower.
Sue: Can we watch all of them like this? It would save us a great deal of time.

A 30-minute version of The Sensorites sounds appealing, but I don’t think it’s going to happen.

It seems unfair to ask Sue to grade this story based on a heavily condensed edit, but at least it provided her with a flavour for both the adventure and the recons as a whole.

Sue: I really enjoyed that. For the very first time, I could actually get into the story. I think it helps that these are real, historical people, instead of cavemen or silly aliens. The plot was very gentle, and I didn’t really understand what happened at the end – did the Doctor win the backgammon game or not? – but I really liked the tone of the story.

She also praised the sets, the costumes and the acting (“When you just listen to them, you realise how good they are”) and she’s convinced the lack of moving pictures actually enhanced her enjoyment because she wasn’t distracted by “poor camera work and flimsy sets”.

Sue: The Doctor was a lot nicer, too. I liked the flashes of sarcasm and I can actually see (or hear) a connection to the character I’m familiar with today. Yes, I enjoyed it. It’s a shame this one is missing. I’ll give it:

Me: So, how do you feel about us watching more recons?
Sue: Not a problem. Bring ‘em on.