Sue: What’s this one called then?
Me: ‘The Dead Planet’.
Sue: How many episodes is it?
Me: One.
Sue: Excellent.
Me: Well, I say ‘one’. You’re not supposed to know. The episodes have individual titles, which means you wouldn’t have known when one adventure might end and another would begin. A story might last for four episodes, another might last for six –
Sue: Six? Six?!
Me: My advice would be to sit back and relax. Try to think of it as one big adventure. It’ll be more surprising that way.

She’s critical from the off.

Sue: The vision-mixer has cocked-up in the gallery. Look how over-exposed that shot is! That’s shocking.
Me: I think it’s supposed to represent the alienness of the planet.
Sue: Yeah, right. So why did it only last for two seconds, then? 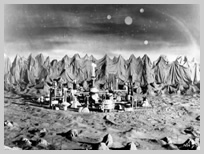 She isn’t impressed with the jungle, the petrified alien, or the model city. I do my best to defend the show – the mantra, “It’s 1963!” is repeated several times – and Sue eventually agrees to cut the special effects some much-needed slack.

She still won’t warm to William Hartnell, though. But who can blame her? When the Doctor sabotages the TARDIS, pretending it’s malfunctioned so he can gain access to the alien city, Sue is livid. Even I’m shaking my head.

However, as Barbara is herded through said city by a series of malevolent doors, I can’t help but notice my wife is biting her nails.

Sue: This is genuinely creepy. I’m starting to worry about Barbara, I really hope she… **** ME! IT’S THE DALEKS!

What she actually said was, “Oh look, it’s the Daleks”, in much the same way someone might notice Adam Woodyatt sitting in An Audience With Michael Buble, but I thought an expletive would look better on the page.

Sue: Go on, then. Stick the next one on. 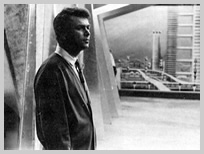 Sue gasps. She honestly believes Ian is dead – she’s never seen a Dalek stun anyone before – and she’s very relieved when he doesn’t snuff it. I think she fancies him.

Sue: The Daleks look rubbish. How could anyone be scared of the Daleks?
Me: It’s the same design that still scares kids today, not counting the new shit ones, of course. How can you say they don’t work? It’s a design classic!
Sue: Oh, they work fine today. They are built very nicely today – very sturdy. This lot look like you could lift up their lids with a nail file.
Me: That is a bit silly, I suppose.

When our heroes succumb to radiation poisoning, Sue is once again surprised by the adult tone of our beloved programme, and as the episode draws to a close, I’m completely unprepared for her verdict.

Sue: I enjoyed that. It was very tense. More like that, please.

The main topic of discussion today is, inevitably, the Thals. Sue isn’t that keen – she can’t get past their hairstyles, and the less said about the holes in their trousers, the better.

Sue: I thought Daleks could fly?
Me: They can. Or at least they will. Or is it that they already did? It’s complicated. Oh, and it’s 1963.
Sue: I’m not saying that we should see them fly, silly, it’s just that they make a big deal about how they can’t leave their own city. Forget a flight of stairs – they can’t even negotiate gravel! And that reminds me, where’s Davros?

Gravel reminds Sue of Davros because of his “gravelly voice”. But before we can get into that (thank heavens), she becomes engrossed in the scene where our heroes disarm a Dalek and Ian clambers inside it. She is, to put it mildly, incredulous. 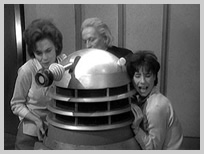 Sue: What the hell are they doing? They can’t do that, can they? That just makes it blatantly obvious the Daleks are driven around by middle-aged men in cardigans. Do they ever do that sort of thing again?
Me: Roy Castle does, but don’t worry about him, he doesn’t count.

She believes that the next episode will involve a clawed monstrosity rampaging through a city. She wants to watch it straight away, but I manage to dissuade her, hoping she’ll have forgotten about the poor thing by tomorrow.

Sue asks me if there’s going to be an ambush in this episode and I’m forced to admit that Terry Nation likes prosaic episode titles. She’ll get used to it eventually.

Sue: Terry Nation invented Doctor Who, though, so you have to cut him some slack. Are you impressed that I know that?

When the promised ambush arrives, the Daleks’ treachery is almost as transparent as the Thals’ trousers. 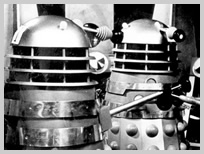 Sue: The Daleks are luring the Thals to their doom with coconuts and rolls of toilet paper. What’s that all about? And what are the Daleks doing with toilet paper, anyway?

She’s also convinced the Thals must be a very shortsighted species, because they can’t see the Daleks hiding in plain sight.

Sue: This programme is incredibly bleak.
Me: How do you mean?
Sue: Isn’t it obvious? Its so-called heroes are going to do a runner, leaving these poor idiots to the mercy of the Daleks. I can’t believe this story is going to end without a happy resolution. Did anyone complain about that when it first went out?

And then the Doctor drops a bombshell: his subterfuge has backfired and he’s marooned everyone on Skaro. I can’t tell if my wife is relieved or disappointed.

Sue: They’re still bastards for trying to leave. It serves them right.

Not for the first time, Sue can’t get her head around what our heroes plan to do next.

Sue: Are they really going to sacrifice an army of innocent Thals so they can escape? That is outrageous.
Me: But very realistic, don’t you think? Wouldn’t you do everything in your power to get off this planet?
Sue: Don’t worry, I know exactly how they feel. 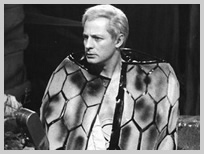 Ian goads a Thal named Alydon into smacking him in the mouth, and Sue is put out when the teacher ends up with a thick lip. But she’s even more annoyed that Ian has conned the Thals into rising up against the Daleks with the oldest trick in the book.

Sue: The Thals would make a rubbish army, anyway. They don’t look like they could punch their way out of a paper bag.

She is, however, impressed by the swamp set. She even liked the octopus thing, if you can call, “That was a slightly better special effect” praise. I’m just relieved she didn’t notice the cardboard cut-out Daleks (although I did book her an appointment with an optician).

Incidentally, when a Thal named Ganatus falls asleep on Barbara’s leg, she is utterly convinced they’re having an affair, and that Ian will go mental when he inevitably finds out.

Sue: Okay, let’s put aside the ‘one big adventure’ nonsense. Just tell me how many more ****ing episodes this goes on for. 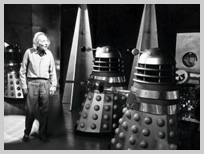 When the episode’s title appears, Sue mumbles, “You’re telling me” at the screen. And as the Doctor and Susan enter the Dalek city, she groans when they are predictably captured.

She’s not that keen on the trials and tribulations befalling the other characters, either.

Sue: We’re going to watch every single person jump across this bloody ravine, aren’t we? And every single one of them will take forever. Am I right? I’m right, aren’t I?

My wife is so bored, she’s reverted to imagining contemporary actors and celebrities playing the Thals, eventually deciding Antodus looks a bit like Michael McIntyre in a bad mood.

Sue: Shall we get another one over and done with?

When I said Sue was responsible for us watching these episodes, I didn’t say she was enjoying them.

Thankfully, Antodus’s sacrifice gets things off to a flying start, and the episode’s stunt work is given the admiration it deserves. However, when Ian and his gang run into Alydon a little later, Sue spots the obvious flaw:

Sue: What was the point of all that pissing about in the swamp when they could have walked through the front door with him?

When the Doctor attempts to bribe the Daleks with the secret of time travel, my wife isn’t remotely surprised. 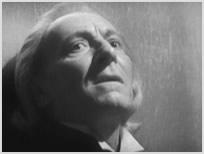 Sue: If he was a modern Doctor, you’d assume he was toying with them and he had a plan up his sleeve, but with this git you really believe he’ll sell out the Thals to get away. What a total knob.

The final battle, which should be exciting and cathartic – especially after all that build-up – is ruined by a series of disparaging remarks about the Daleks’ inability to shoot straight. And when the Doctor is freed but then refuses to do anything even remotely heroic (the only humanoid on-screen who doesn’t), Sue actually boos him.

Sue: They should have called the show Ian.

But she’s happy, too. We are finally leaving Skaro. And then, just to make it clear she has been paying attention, she proudly exclaims over the closing credits:

Sue: I told you Barbara was shagging a Thal.

Sue deliberated for ages. I’d chided her for rushing to judgement with a crap score last week, so I admired her decision to give her verdict some serious thought and consideration this time.

Sue: Have I done it again? Is that too low? Will people be upset with me?
Me: Don’t worry about them. I just want to record your honest reactions.
Sue: Two out of 10.
Me: Are you joking?
Sue: I don’t really have anything to compare it to, apart from the new series. Oh, and Genesis of the Daleks, which this story seems to contradict.

I protest, pointing out that events in that story don’t happen for another 10 years, but getting into Dalek chronology right now could be fatal so I pull back.

Sue: I don’t understand how you want me to watch this. Do you want me to react how a viewer in 1963 would? Or as someone who knows nothing about Doctor Who in 2011? Do you want me to pretend I don’t know what a Dalek is?
Me: Just be yourself and react how a viewer with some working knowledge of Doctor Who would.
Sue: Define working knowledge? I can name all the actors, you know. Even the one who doesn’t count.
Me: (Under my breath) Ones.
Sue: Sorry, what was that?
Me: Nothing. Look, just be completely honest about how it feels to watch the programme right now. If you want to contextualise it, and give the production team a break because they were pioneers who didn’t have a clue what they were making, that’s fine. And if you want to look upon it favourably because it introduced an icon into popular culture, well, that would be acceptable as well.
Sue: Okay, okay. Calm down. In that case I’ll give it:

Me: You do realise that if it wasn’t for this story, the series would have been cancelled after a handful of episodes. We wouldn’t be conducting this experiment today if it wasn’t for The Daleks.
Sue: Can I change my score back to Two out of 10?