The Sea of Death

Damn, she’s good. Even I didn’t notice the production team member pushing the revolving door when I saw this episode for the first time. It happens at least twice (three times, according to Sue), and she spends the entire episode scanning the frame for the slightest hint of an AFM. She’s gonna love Earthshock and Snakedance if we get that far (and on the strength of this episode, I wouldn’t hold your breath). Her reaction to the Voord is interesting, though.

Sue: Pah! They are obviously men in rubber suits. 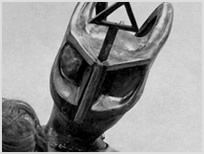 She’s horrified when our heroes discover one of the poor buggers has been liquefied in his suit (“That’s a bit sick!”), but she perks up again when Ian and Barbara lecture the audience about temples and counterweights.

Sue: What a nice scene. They’re educating the audience, but it feels completely natural because the real heroes of this programme are a couple of schoolteachers.

Sue: Okay, let me get this straight: this monk wants to use a machine that rules the minds of men – especially men in wetsuits – but doesn’t that make him a dictator? I’m not convinced this bloke is a good guy. I don’t trust him one little bit.

Our heroes agree with Sue and they decide to piss off back to the TARDIS (as is their habit). But when disaster strikes, they’re forced to help Arbitan after all.

Sue: Ian is acting as if this is an inconvenience to him. He actually suggests they just get on with it and find the bloody keys. The Doctor is rightly appalled that they’re being blackmailed into helping this guy, but nobody seems to be bothered by what this machine of his actually does.

And then Arbitan is stabbed in the back by a Voord.

Sue: I didn’t see that coming. I can’t get a handle on this at all.

The first thing that annoys Sue about this episode is the suggestion Barbara has had enough time to get settled into a hotel (a hotel that looks suspiciously like the Grace Brothers department store), even though she arrived there only a few seconds before her companions did.

Sue: They don’t seem to be in a hurry to find these keys. They look like they’re happy to sit around, stuffing their faces with pomegranates. If they can’t be bothered, why should I?

Only Ian believes things are too good to be true. 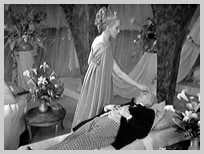 Sue: All these beds make it look like they’re taking part in Big Brother. There’s even a flashing eye in the wall. That means the diary room is free.

And then, in a very poor Geordie accent – which is amazing when you consider she was born in the North East – Sue drawls:

Sue: It’s day 42 in the Big Brother house. Ian has been given a secret task to find the Keys of Marinus, while Susan has been called to the diary room for counselling because she won’t stop crying.

When the plot kicks finally into gear, Sue’s praises the POV shots and pre-filmed cutaways. She’s catching on fast when it comes to understanding how they used to make the show back then, probably because I keep banging on about it, but she still can’t accept a laboratory set which consists of nothing more than a table and a dirty mug. I try to defend the scene’s internal logic but it’s hopeless.

Thankfully, we can both agree that Barbara Wright is brilliant, especially when she smashes the Morphotons to smithereens.

Sue: I love Barbara, even if she does remind me of Cherie Blair in a polo neck sweater.

When our heroes decide to split up (so Hartnell can go on holiday for a fortnight), Sue has an epiphany.

Sue: I’ve realised what this story reminds me of.
Me: What? Flash Gordon? Waiting for Godot? Ibsen?
Sue: No. Todd Rundgren.
Me: WHAT?

And then Sue told me something I’ve never read in any magazine, fanzine or Andrew Pixley archive: The Keys of Marinus inspired Rundgren’s 1970s prog rock band, Utopia, to write their 1977 album, Ra. She fires up her iPad and recites the lyrics to ‘Singring and the Glass Guitar’.

Sue: ‘Jealous forces have conspired to capture the spirit, imprisoning it in a chest with four keys, and casting the four keys to the four corners of the Earth.’ See!

Even Tat Wood didn’t pick up on that!

Sue: I liked that episode. It didn’t piss about. I wouldn’t want to spend six episodes fighting stupid brains in a jar, but this one flew by. Next!

Sue: I don’t think I can take another 25 minutes of Susan screaming. She’s really beginning to annoy me. Don’t you want to give her a slap, Neil?
Me: Don’t feel bad about it. Carole Ann Ford felt pretty much the same way.
Sue: I wish Altos was still wearing the costume created by his imagination, because what he’s got on right now leaves absolutely nothing to the imagination! If he bends down, I may faint.

Things get even saucier when Barbara has to deal with a security device which consists of an idol with realistic hand action.

Sue: If Barbara was a few inches shorter, she could sue that statue for sexual harassment.

Inside the temple, the security measures are even more over-the-top (“It’s Mousetrap!”), and then the plants come to life and kill the guardian of the key. He dies before he can tell Ian and Barbara where the thing is hidden, but he does have enough time to leave a cryptic clue. They search desperately for the solution as a floor manager waves a bush at them from the corner of the studio.

Sue: There’s a lot of tension in this scene.
Me: Yes, sentient plants are very scary, but you ain’t seen nothing yet – just you wait until 1976!
Sue: No, I’m talking about the sexual tension between Ian and Barbara. If they aren’t shagging yet (and if you ask me, they’ve been at it for years), then it won’t be long now.

Then, as if to prove her point, the episode ends with our heroes cuddling each other. They are about to freeze to death, but even so.

The Snows of Terror

Doctor Who is famous for its iconic monsters – Daleks, Cybermen, Sontarans, Fifi the Stigorax – but nothing could have prepared Sue for this story’s contribution to that roll call of evil: a fat, hairy rapist.

She takes her mind off the oppressive threat of imminent sexual violence by concentrating on how unbelievably fake the snow looks. Once again, I tell her to wait for 1976. She also finds it hard to believe Altos could survive Skegness, let alone sub-zero temperatures on Marinus, in that skimpy dress of his. Not that Ian is faring any better in his silk kimono and furry tank top.

Sue: Haven’t we been here before? Weren’t they flinging themselves across painfully narrow chasms just a few weeks ago? This feels very familiar.
Me: What can I say? Terry Nation suffered from short-term memory loss.

Speaking of memories, I inform Sue that the Ice Knights are almost certainly Peter Davison’s first memory of the show, and if he ever needed to act scared when he was playing the Doctor, he’d think about this sequence because it freaked him out so much.

Sue: Really? Does he look like he’s falling about laughing when he’s supposed to be scared, then? Because they look like the Knights who say “Ni!” This is like a pantomime. How can you go from the threat of rape and murder to this?

The episode concludes with Ian being bludgeoned over the head by an unseen assailant. Sue is convinced the Doctor must be responsible, because she still can’t get it into her head he’s supposed to be the good guy.

William Hartnell is back and, to my surprise, Sue is pleased to see him, especially now he’s reinvented himself as a geriatric Sherlock Holmes.

Sue: He’s really good in this scene. He’s not quite Benedict Cumberbatch, but he’s close. I think he went on holiday and had a bloody good think about how he should play this part. This is the best I’ve seen him so far.

Because this is 1960s Doctor Who, the threat of sexual violence is never that far away, and this time it’s the sound of a policeman beating his wife behind closed doors which provokes the most head-shaking from Sue.

Sue: What’s with all the violence against women in this programme? What’s that all about?

Her observation is given even more weight when Barbara takes a phone call from a kidnapper who has taken Susan hostage. As the poor girl calmly proclaims she’s about to be murdered, we could be forgiven for thinking we’re watching a gritty crime thriller about a paedophile ring.

Sue: That was the best episode so far. I could actually believe most of it. The sets looked real and the society felt vaguely realistic for a change, too. The problem lies with the direction – it’s so flat. There was some nice depth of field in the courtroom scenes, but it’s very slow.

The Keys of Marinus

As the plot on Millennius meanders inexorably towards its conclusion, Sue’s thoughts begin to turn to what our heroes will do with the eponymous keys now they’ve found them.

Sue: If they hand them over to the dictator, I’ll be very disappointed.
Me: He’s already dead! He was stabbed at the end of the first episode!
Sue: Was he? I don’t remember that.
Me: We only saw it five days ago! If this was the 1960s, a whole month would have passed.
Sue: They should do a re-cap at the beginning of every episode.
Me: They already do!

Our heroes return to Arbitan’s temple, unaware the Voord are crawling all over it.

Sue: Who are this lot again?
Me: That’s Yartek, former leader of the glorious alien Voord.
Sue: Oh yes, the blokes in the wetsuits. Hang on, if they’re wearing wetsuits, why haven’t they taken them off yet?
Me: Maybe they have and that’s what they look like underneath. I don’t know!

Yartek attempts to extract the final key from Ian with a cunning disguise – he places a cloak over his head and refuses to look him in the eye.

Sue: That isn’t even remotely suspicious. If Ian falls for that, I’ll be very disappointed.

Bizarrely, he does and he doesn’t. Ian claims something was a bit fishy about Arbitan (was it the fact he had the wrong shaped-head and a completely different voice, perhaps?) but he still hasn’t caught on yet. And then, two minutes later, just when everything looks like it’s going to go completely pear-shaped, he tells us he gave Yartek the wrong key, anyway. Sue doesn’t buy this for a second.

Sue: What a load of old bollocks.

Sue: The only positive thing I can say about this story is that it kept things interesting with a different location each week. But the acting was dreadful. Altos was a wimp and Sabetha the Teenage Wench was painfully wooden. In fact, I think she’s still possessed by those brains in a jar.

I’m really worried about the next story. I love The Aztecs to bits – it’s my favourite Hartnell by a mile – and if Sue doesn’t enjoy it, I’ll be crushed.