A Land of Fear

I stun Sue with a confession.

Me: I’ve never seen this story before.

She spits a mouthful of hot coffee over our kitten, Tegan.

Me: It isn’t my fault! I didn’t have a VHS player when they released this story. And bits of it are missing, of course.
Sue: What do you mean, bits of it are missing?
Me: Two episodes out of six – episodes four and five to be precise – are missing from the archives. We’ll have to watch them as reconstructions, like we did with Marco Polo.
Sue: Oh good. I liked that one.

The story begins with the Doctor in a foul mood, which is a pity because Sue was just beginning to warm to him. In fact, she can’t tell if his gruff threat to put Ian and Barbara off the ship is a full-on dicky-fit or just playful banter.

Sue: I don’t think Ian and Barbara want to go home yet. Not really. I mean, what have they got to get back for? A pile of marking? An Ofsted inspection? Coronation Street?

While Ian and Barbara debate this, Sue notices Ian can’t stop glaring at Barbara’s breasts. And then, without warning, the playfulness that has been a hallmark of the episode so far is replaced by confusion, bloodshed and horror.

Sue: If this was the new series, I’d expect the revolutionaries to be the allies who helped us through the story. But in this, they’re killed in the first few minutes. I still can’t get over how bleak this show is. No one seems safe.

As if to underline her point, the cliffhanger, where the Doctor is left to burn to death, is met with unequivocal praise. 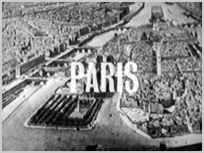 Sue: Is this a recon?

It’s the still-image of a guillotine that throws her, and when she turns to question me, she missed the moment where the blade comes crashing down. When she turns back to the screen, she’s confronted with a hand-drawn map of Paris, which only fuels her confusion. In fact, she’s disappointed when the images start to move again.

Sue: The little boy is really good. Does the Doctor come back for him? Does he become a companion?
Me: No. And isn’t the TARDIS crowded enough already?
Sue: That’s a shame. He brought out a really nice side of Hartnell.

As the Doctor begins his arduous journey to Paris, I ask Sue if she notices anything different about this episode.

Sue: Yes, we’re outside for the first time. Real location filming. It’s nice. It’s just a pity that isn’t William Hartnell – his walk is too sprightly. Still, it does give the story a more epic feel, I guess. Although I think I prefer it when they’re in the studio; it feels more honest, somehow.

When the Doctor gets embroiled in a dispute involving a chain gang, my wife is less than impressed.

Sue: You flaming idiot!
Me: Hey! He was trying to stick up for the oppressed. He was trying to be the good guy, just like you keep saying he should.
Sue: His only priority right now should be getting back to Ian, Barbara and Susan. He’s a moron for getting involved in that stupid altercation. It isn’t as if he was going to free the slaves, he was just being unnecessarily sarcastic. What a dick.

When the Doctor whacks an official over the head with a shovel, Sue is convinced he’s killed him, and she’s relieved when it turns out to be harmless cartoon violence (which doesn’t really tally with the rest of the series so far).

Meanwhile in Paris, things are looking very grim indeed. There’s yet another hint of impending sexual violence (this time it’s a prison guard who can’t keep his eyes off Barbara’s breasts) and Susan’s been reduced to a gibbering wreck. Again.

When I suggest Susan might be hundreds of years older than Barbara, my wife asks me to provide her with some evidence, which, of course, I can’t.

Sue: That’s a great shot of Ian behind those bars. It’s very cinematic. I’m really impressed with the direction, here. It’s a massive step up from The Sensorites. Okay, let’s crack on.

A Change of Identity

Sue: Is that nose a special effect?
Me: It’s difficult to say. It could be.
Sue: He must be from Bergerac. Everyone from Bergerac has a nose like that.
Me: Even John Nettles? 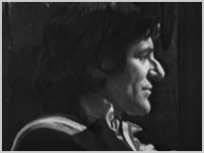 This time it’s Colbert’s turn to stare longingly at Barbara’s heaving bosom – “Form an orderly queue, gentlemen!” – and then we become embroiled in a debate about unwanted pregnancies and interfering with history. In short, my wife came up with a cracking proposal for a Virgin New Adventure circa 1994.

Sue: Hartnell is doing quite well in this one. He seems to be more relaxed in the real world stories. It’s as if he has a handle on what’s happening for a change.

Sue thinks Ian is acting a little differently this week, too. He’s settled into the role of action-man adventurer and Sue agrees it suits him.

Sue: I have to say, the costumes look fantastic. I’m not convinced by the Doctor’s hat, though. He looks like he’s got a dead chicken perched on his head. Look, you can see its legs dangling down the side of his neck.

The episode concludes with a close-up of the Doctor’s ring.

Sue: And that’s supposed to be scary, how?

The Tyrant of France – A Bargain of Necessity

No telesnaps exist for this story, and the recons I had at my disposal were borderline unwatchable. Luckily, I found a version on YouTube which spliced the fourth and fifth episodes together very nicely indeed, so we watched that instead. Sue loves it, especially when the stills suddenly lurch into life.

Sue: What amazes me is that not only did somebody think it was worth filming a bit of Doctor Who off their telly with a Super 8 camera, but the footage actually survived and now we’re watching it on a computer screen decades later. That boggles the mind.

I remind her that people were recording the soundtrack on reel-to-reel tape recorders within weeks of the programme starting.

We then engage in another lengthy discussion about the missing episodes, which fascinate her, and it I have to convince her that The Tenth Planet episode 4 isn’t sitting in a car boot somewhere in Redcar. She has a friend with a massive collection of old film cans and she’s already making plans to get her hands on a cine projector so she can check them all. You know, just in case. (I am not making this up).

Sue: Somebody should make a good documentary about the missing episodes.

Later that night, I’ll show her the Missing Episodes documentary on the Lost in Time DVD box set.

Sue: Like I said, somebody should make a good documentary about the missing episodes.

Sadly, as interesting as this debate is, I’m beginning to lose track of the plot. Thankfully, Sue is able boil it down for me.

Sue: It’s basically a bit of a runaround where people get locked up, then they escape, and then they get locked up again. To be honest with you, Neil, it’s a bit slow. They could have wrapped this up ages ago. I understand why it goes on so long, and how it all boils down to simple economics and they have to re-use the sets, but it doesn’t half go on.

Sue: I’m getting a little tired of these constant visits to the prison. It’s as if the writer doesn’t really care about the regulars – he just wants to tell his story about the French Revolution. The Doctor is doing absolutely nothing at all.
Me: It doesn’t help that my knowledge of the French Revolution is a little rusty, thanks to my shoddy education. I’m guessing that children watching this in the 1960s would have been taught this period of history at school, so it probably made a lot more sense to them.

Sue correctly guessed Napoleon would turn up long before I did. Like I said, education in the 1960s was so much better.

Sue: This isn’t children’s television. It’s a proper drama about politics and history. There’s nothing for the kids to latch onto here. There’s very little adventure or excitement and, as Barbara says, history has already been written; they don’t even think about interfering with it. In fact, Barbara just laughs it off. I don’t see where the drama is supposed to come from.

When the episode reaches its predetermined conclusion (which includes a horrific moment where Robespierre is shot in the jaw – it happens off-screen but your mind fills in the blanks), our heroes return to the TARDIS and the season concludes with a touching speech from William Hartnell as the screen is filled with stars.

Sue: I liked the bit about them finding their destiny in the stars. Does this mean they’ve given up trying to get back to 1963? Have they decided to have some fun exploring the universe? I like that idea.

Sue: It looked great, and it was well acted, but it was very slow. I found it difficult to care about anyone towards the end. And if I want to see a revolution, I can turn on the news.

Me: We’ve made it through the first season of Doctor Who. Congratulations! There are ‘proper’ fans who haven’t done what we’ve just done.
Sue: How many seasons are left?
Me: 25.

Me: Don’t panic. You can practically fit the last three seasons into Hartnell’s first. They churned out episodes in the 1960s like there was no tomorrow. In fact, back in 1964, audiences only had to wait a few weeks for the second season to start.
Sue: Really? So how long do we get off?
Me: A day. That seems fair.
Sue: Would you like me to sum up the first season for you?
Me: Go ahead.
Sue: It was all over the place. They are obviously making it up as they go along, but it was interesting to see how it all began. I’m actually looking forward to seeing how things develop once they settle down a bit. Hartnell is getting better, but he’s still a pain in the arse.