I was a sneaky bastard, too. I cued up the DVD and paused it just before the film started, and then when Sue entered the living room, I told her we were going to watch a one-part story. Once I’d secured the restraints and hit ‘play’, I then took great delight in watching her jaw drop to the floor as she was assaulted by a kaleidoscope of bright colours and a John Barry-esque score.

Sue: What the hell is this? It’s in colour!
Me: Yes.
Sue: And it’s widescreen!
Me: Yes.
Sue: This is the bloody movie, isn’t it? Why are you making me watch this, Neil? This wasn’t part of the deal.

I explain that the movie was released when William Hartnell was still playing the Doctor on television. Besides, I thought she’d be grateful for the splash of colour.

Sue: Why didn’t they just cast William Hartnell in the film?
Me: I thought you liked Peter Cushing?
Sue: I do, but this doesn’t feel right. Was Hartnell pissed off?
Me: He was livid. Imagine if they’d made a feature film starring Johnny Depp during the David Tennant era.

We haven’t even made it past the title sequence and Sue is already finding this uncomfortable. And then it gets much, much worse.

As far as Sue is concerned, everything about this film is wrong. It isn’t just different. It’s wrong. In fact, she’s so distressed by the changes, she can hardly get her words out. Everything she’s learnt about the series is being torn apart and replaced by a more accessible, family-friendly alternative. And it’s driving her nuts. Barbara is the Doctor’s granddaughter (“Stupid”), Susan is 12 years old (“Bizarre”) and Ian is a bumbling buffoon (“I love Roy Castle to bits but this is RIDICULOUS!”).

Sue: His name is Doctor Who! They can’t do that!
Me: Yeah, you’d never catch the TV series doing something stupid like that.
Sue: So her name must be Barbara Who and that’s little Susie Who. This is silly. Why are we watching this, Neil? I’ve seen enough. Stick a Hartnell recon on instead.
Me: It’s worth sticking with. Elements from this film have seeped into the TV series. Look at the TARDIS, for example, it’s the same shade of blue as Matt Smith’s TARDIS.
Sue: It is a very nice TARDIS, I’ll give you that. It’s chunky.

But when Ian walks into it…

She’s so angry, you can feel her fire. 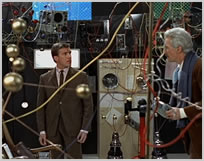 Sue: What a pigsty! There’s no central feature to draw your eye. It looks like someone’s garage. It’s cheap.

And then she becomes really angry.

Sue: So the Doctor isn’t an alien from another planet?
Me: No. He’s just some guy who invented a time machine that looks like a police telephone box in his back garden.
Sue: Well, that’s just stupid. This isn’t Doctor Who. I bet all they care about is the Daleks. They even share top billing with the Doctor in the title. What a disgrace.
Me: Okay, calm down. We’re on Skaro now. Don’t you want to see how Terry Nation tells the same story we watched in three hours in a third of the time?
Sue: Not really. And I can’t believe that Terry Nation agreed to re-write himself like this.
Me: Oh, you’ll get used to that.

Sue isn’t taken with Peter Cushing’s performance, which is surprising given her antipathy towards Hartnell, even if she does find him a little easier to deal with (“He isn’t a complete ****, and he actually knows his lines”).

Sue: He’s too doddery, he’s stooped over like a geriatric ape. It isn’t good casting, this.

The added slapstick from Ian is given short shrift, too.

Sue: If this was anyone but Roy Castle, I’d want to punch him in the face. Maybe he should do a little tap dance – that might open the doors to the city.

But her most ferocious salvo is saved for Jennie Linden.

Sue: This Barbara is terrible. She has no personality at all, she’s nowhere near as attractive as our Barbara, and her trousers are rubbish! Susan is played by a very capable young actress though – she’s very good, actually. She’s acting Barbara off the screen.

When the Daleks turn up via a very impressive reveal, Sue can’t help but admire them. 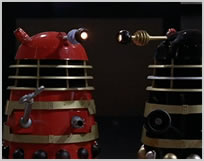 Sue: I like these colourful Daleks. They remind me of the new fat ones in the Matt Smith series. I’m not sure about the indicator lights on their heads, though.

Sue likes the Dalek city – it reminds her of James Bond – although it isn’t long before the lava lamps become an amusing distraction.

Sue: The sets are very impressive, especially the hill leading up to the city. It’s massive. You can see where all the money went. I just hope Richard Martin saw this. He may have learnt something about directing.

In fact, there are plenty of scenes which meet with Sue’s approval: Ian washing his face, the army of Daleks chanting in unison, the Dalek falling into the lift shaft and slicing his eye stalk off in the process, the Thal assault on the city. But nothing can mitigate for the innate sense of wrongness that permeates every frame of the movie as far as Sue is concerned.

Sue: What a cop-out – the Thal didn’t commit suicide this time. I’m sure he sacrificed himself in ‘The Dead Planet’.

Sue refers to the first Dalek serial as ‘The Dead Planet’ throughout the screening of this film. Bless. 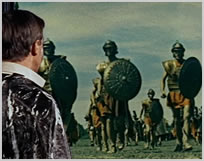 Me: I guess it highlights how dark and depressing the TV series is. For instance, they don’t even attempt to show a swamp monster. It would have been too scary, I guess.
Sue: The most interesting thing about this film for me is that it was made so close to the original. It isn’t as if we’re watching a remake 30 years later with loads of CGI. And yet they seem to exist in completely different time frames. On the one hand, the film is clearly much more impressive – it’s quicker, bigger and better made – but at the same time it’s less impressive than the original. And the original wasn’t that impressive to begin with.

The movie concludes with Ian throwing a dicky fit when a remake of The Romans appears to be on the cards.

Sue: Please tell me they didn’t make a sequel.

Me: Right, how many marks are you going to give that?
Sue: Nothing.
Me: Zero out of 10? Are you serious?
Sue: I refuse to mark it. It doesn’t count. A bit like Paul McGann.
Me: But Paul McGann does count.
Sue: Does he? I thought Queer As Folk said he didn’t.
Me: The last time I checked, Queer As Folk wasn’t canonical. Then again, nor is this.
Sue: I’m still not marking it. You can’t make me.