We had to watch this episode twice.

I’d love to tell you Sue adored it so much we decided to wallow in its glorious splendour again, but the sad truth is we had to re-watch it for an array of complicated reasons which I will bore you with now.

First of all, our mutual friend, Simon ‘Rula’ Harries, came to stay for the weekend, and late on Friday night I temporarily took leave of my senses and suggested he join us for the first episode of The Crusade. You know how it is, you have a drink or three and before you know it you’re inviting friends to do weird things with your wife.

It seemed like a good idea at the time, but as I slotted Lost in Time into the DVD player, Sue confessed she was suffering from performance anxiety. I felt uncomfortable, too. It didn’t seem right having Simon watching her like that, especially since she felt self-conscious in the presence of his encyclopedic knowledge of 1960s Doctor Who trivia. In short, her heart wasn’t in it.

The next evening, John Williams visited us, and he warned Sue radicalised fans might be upset with her observations on the Zarbi, and how she should be very careful when opening doors to strangers for the rest of her life. I tried to convince her John was (mainly) joking, but the upshot is she retired to bed that night without her daily Hartnell fix. I’m sure I detected some regret, but my offer of a David Whitaker novelisation was rejected out of hand.

The following day I was too ill to watch an episode and Sue worked late the day after that, so by the time Tuesday rolled around we hadn’t watched Doctor Who together for THREE WHOLE DAYS.

Sue: I haven’t got a clue what happened in the last one, it’s been so long. Something about Richard the Lionheart and Barbara almost getting raped again, I think.
Me: Don’t look at me. If I don’t write it down within a few hours, I can’t remember a damn thing. And it’s been several days since we last, you know, erm, since we, er…
Sue: Let’s just pretend that didn’t happen. We should watch it again. Alone.

And that’s exactly what we did, and after the surrealistic thrills of The Web Planet it was a blessed relief to find ourselves back on terra firma again. 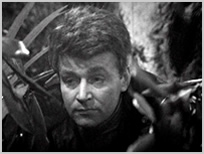 Me: Real people. Real locations. Real dialogue. Bliss!
Sue: Ian looks completely knackered. He used to step out of the TARDIS brimming with wonder and excitement, but now he seems like he’s resigned to getting beaten up as soon as the episode starts. Poor Ian.

She’s almost right, but it’s actually Barbara’s turn to be assaulted this week – by Saracens no less.

Sue: The direction is excellent. Who is it?
Me: Douglas Camfield.
Sue: He’s definitely one to watch.

When Richard the Lionheart turns up, Sue is immediately drawn to his magnetic screen presence.

I have to remind myself Sue isn’t the sort of person who remembers the names of actors. Some of my friends can spot Tutte Lemkow at a thousand paces before reeling off his CV, but Sue has difficulties remembering who Adam Woodyatt is, even though he plays a character she’s been watching regularly on television for 25 years, so Julian Glover never stood a chance. You’ll get used to this. In fact, I confidently predict she still won’t know who Julian is if we reach Paris in 1979.

Sue: What’s he been in again?

There isn’t a single recognisable vehicle in which to seat Mr Glover, so I reel off his supporting roles in Indiana Jones and the Last Crusade, For Your Eyes Only and The Empire Strikes Back.

Sue: And you wonder why I don’t know who he is? He does have a lovely voice, though, even if he is playing a complete bastard.

When we enter Saladin’s court, Sue fails to recognise Bernard Kay, an actor she was admiring only a few weeks ago. Which brings us nicely to a problem that will continue to raise its head throughout this story.

Sue: You couldn’t get away with blacking-up like that today.
Me: Not unless you’re David Walliams.

The Knight of Jaffa

This is Sue’s first full-length recon. Up to now, we’ve watched condensed edits, but this is the real deal, with John Cura telesnaps and everything.

Sue: Ian would do anything for Barbara. He’d happily fall on his sword for her if he had to. I can’t imagine them ever being apart.

When Ian is knighted, the Doctor suggests he’d like to be honoured the same way someday. 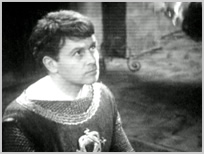 Sue: Didn’t the Doctor get knighted in a David Tennant episode?
Me: He did. The one with Queen Victoria fighting werewolves in Scotland.
Sue: I don’t know whether I should be happy or sad for spotting that reference.

And then she confesses that she hasn’t got a clue what’s going on.

Sue: I can’t fault this – the acting, the script, the sets – it’s very good. But it’s also very complicated. I’m finding it hard to keep up, to be honest. I can’t imagine kids being enthralled by this in 1965. It’s a serious play for adults. I like it but there’s something missing.

Part of the problem is Sue spends the entire episode playing her favourite game of ‘lookalikes’ – the telesnaps feature long static shots of the actor’s faces and she can’t help herself. So far, she’s spotted Bruce Forsyth, the opera singer from the Go Compare adverts, and one of the maids from Upstairs, Downstairs.

Me: That’s Jean Marsh.
Sue: What’s she been in again?
Me: Well, Upstairs, Downstairs for a start. We’ll be seeing a lot more of her as the series goes on. Oh, and she eventually marries a Doctor in real life. Do you want to guess?
Sue: I have no idea. Colin Baker?

When we are left to dwell on still image of Marsh and Glover, in what can only be described as a romantic embrace, I have to remind Sue that Joanna is Richard’s sister.

Sue: I don’t think I’ve ever seen incest portrayed in a children’s television programme before. Not even in Grange Hill.

The Wheel of Fortune

Episode three gets off to a flying start.

Sue: That’s the best scene in Doctor Who so far. It’s three men shouting at each other in a room, but the dialogue and the direction take it to another level. The script is amazing. I haven’t got a clue what’s going on but they make it sound brilliant. And is it just me or is William Hartnell raising his game? He’s surrounded by fantastic actors giving it their all, and I think it’s rubbing off on him. He’s never been better.

When Richard and Joanna have a blazing row, Sue is rattled by its intensity. 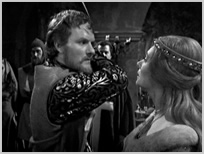 Sue: Part of me wishes this didn’t have anything to do with Doctor Who. I always feel slightly disappointed when we cut away from these characters to William Hartnell. I’m much more interested in Richard’s predicament than the Doctor faffing about. I mean, what is the Doctor doing, anyway?

Barbara is having a torrid time. Things are so bad, she even contemplates suicide, and when she’s brought to El Akir, his intentions are disturbingly clear.

Sue: As far as I can tell, every story has a subplot where Barbara has to endure the threat of imminent rape and torture. It isn’t fair.

Sue: I’ve changed my mind about the recons.
Me: Already? But this is one of the better recons. We’ve even got the remastered audio.
Sue: It’s fine. I actually prefer the recons when it’s just people standing around talking, but when there’s an action scene I really want to see it. I’m also finding some of the dialogue difficult to understand when I can’t see their lips move.

But the strangest thing about The Crusade is the way it suddenly runs out of steam and stops. The Doctor isn’t allowed to have a significant impact on historical events – these strict rules were laid down during The Aztecs – and so a story about grand political schemes is suddenly reduced to a convoluted race back to the TARDIS. The change of gears is so pronounced, Sue is convinced she must have missed something important.

Sue: Well, that was very good. I found it difficult to keep up with the plot (which went nowhere) and I have an issue with the Doctor’s lack of involvement (again), but it was very well made and it didn’t outstay its welcome. I’ll give it: