Things get off to a pretty good start with some excellent banter in the TARDIS. And then the Doctor accidentally asks Susan to open the doors.

Sue: Ah, bless him. I want to give the Doctor a big cuddle.

Barbara feels the same way, and when she carefully places herself in the role of surrogate granddaughter, Sue is genuinely touched.

Sue: That was really sweet. I’m glad they’re referring to it, too. I was worried that Susan would be swept under the carpet and completely forgotten.

As the TARDIS crew ponder Susan’s fate, Sue hazards her own guess.

Sue: I bet she’s having really bad sex with David, wondering, “What the hell have I done?!”

When Koquillion looms out of the shadows, Sue’s response (“Oh dear, that’s not good at all”) leads me to believe she’s correctly identified the villain of the piece, but what she’s really doing is dissing the preposterous costume. However, her sneering quickly turns to anger when the villain pushes Barbara over a cliff, although she’s back to scathing mockery again when he sets off a rock fall to trap Ian and the Doctor.

Sue: Is he using a monkey wrench? Seriously?

Sue: I like it when they draw attention to the fact that everything looks stupid. It makes me feel like I’m back in the loop again.

Unfortunately, Bennett and Vicki’s predicament fails to engage Sue. In fact, she doesn’t say a word about Vicki, save for a throwaway remark about how short her dress is, and I decide not to press her on the character’s potential for the time being. Of course, when we discover that we are on the planet Dido, she has plenty to say.

Sue: Dido? Dido! Are they having a laugh?

Speaking of rubber monsters, Sandy the Sandbeast doesn’t impress her much, either. 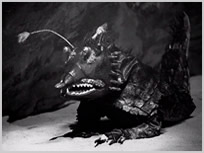 Sue: It’s like we’re watching Raiders of the Lost Ark in slow motion on a blurry black and white television. The monster looks terrible, and the spikes look like cardboard. However, there’s some very funny banter between the Doctor and Ian, which is nice; they seem to be really close friends, now.

In short, the cliffhanger doesn’t really do it for Sue.

Sue: I suppose Ian could get a paper cut if he’s not careful.

The first few minutes pass without comment. To be honest, I can’t tell if Sue is bored or engrossed.

And then Barbara shoots Sandy the Sandbeast in the face. 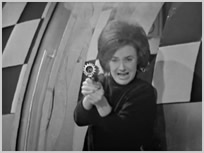 Sue is conflicted by the ramifications of this. On the one hand, she is devastated by Vicki’s loss. It doesn’t matter if Sandy was a bad special effect yesterday, as soon as he gained ‘pet status’, his death was suddenly on a par with Bambi’s mother. And yet she loves Barbara to bits (she cheered when Babs pulled the trigger) and she hates to see her upset. Unusually, Barbara’s assessment of the situation was entirely wrong (if understandable). It’s a tricky scene for Sue to process.

And then she’s distracted by the sight of the Doctor breaking down the door to Bennett’s room with an iron girder, even though he’s been specifically told he can’t come in.

Sue: Bennett could be doing anything in there! What the hell does the Doctor think he’s doing? I hope the toilet doors on the TARDIS have really strong locks.

When Bennett’s insane (but strangely logical) plan is finally exposed, it takes Sue a while to fully comprehend it. Her reactions range from incredulity (“He killed everyone?”) to grudging admiration (“So it really was just a bloke in a costume after all”), before settling for bewilderment (“Who are these guys?”).

As the TARDIS crew prepare to leave, Sue finally poses the obvious question:

Sue: Why doesn’t Vicki just go with him?
Me: Are you seriously telling me that you didn’t guess that Vicki was a replacement for Susan from the beginning?
Sue: I had my suspicions, but only because her face is vaguely familiar. At first, I thought I was supposed to think she was going to replace Susan, but then they’d kill her off. So I wasn’t entirely sure, no.
Me: So how do you feel about Vicki becoming a companion?
Sue: Is that what you call them? Companions? I thought they were assistants?

We then get embroiled in a lengthy debate about what constitutes a bona fide companion (“What about Rose’s mum?”). It’s a topic we’ll return to in a few weeks’ time. 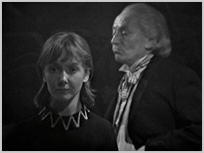 Sue: She’s a good actress and she seems nice enough. We’ll have to wait and see. I like the way the scene where the Doctor invites her to join him isn’t a million miles away from Matt Smith asking Amy to do the same. It reminds me that I’m watching the same programme.

Unfortunately, the story’s resolution raises more questions than it answers.

Sue: So there are only two Didos left on the planet, then? How will they repopulate it? It’s Adam and Adam!

She’s amused when the Doctor suggests that Dido’s people won’t let the rescue ship land, and she manages to extrapolate this throwaway line into a full-on intergalactic war (which won’t last very long given there’s only two of them and they’re armed with a spanner). However, before Sue can exhaust the possibilities of that particular scenario, the TARDIS arrives at its next destination and immediately topples over the edge of a cliff.

Sue: They never seem to get a day off.

Sue: I didn’t see the twist coming, but the plot leading up to that point was practically nonexistent. Still, it could have been a lot worse – we could have spent four episodes on Dido. Dido! Can you believe it, Neil? They called the planet Dido!

When she stops laughing, Sue gives The Rescue: