Sue: Have we skipped an episode?

Sue can’t believe yesterday’s cliffhanger has somehow resulted in a luxurious holiday for four in Italy.

Sue: Poor Susan. She would have loved this. It’s so unfair.

A few minutes later, Sue reiterates her preference for so-called ‘real’ stories over futuristic ones. Her reasoning is simple.

Sue: I can enjoy this a lot more because they are enjoying it too. Hartnell is having a great time, which means I don’t have to worry about him screwing it up. He’s a bit camp at times, but he’s having some fun with this one and it’s rubbing off on the others. I can relax. It looks great, too. Is it just me or does everything feel bigger and better in season two?
Me: Well, they’ve moved from Lime Grove to the larger Riverside Studios.
Sue: You can tell. This is so much better.

The Doctor and Vicki head for Rome, leaving Ian and Barbara to shag themselves senseless in the villa. Or at least that’s what I expect Sue to focus on. 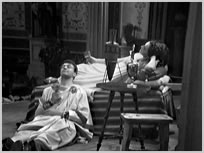 Me: Go on, then. Say it.
Sue: Say what?
Me: Isn’t it obvious? Fanboys like me tend to think that Ian and Barbara have just shagged.
Sue: They’ve been at it for months, if not years, Neil. And besides, they’re pre-coital, not post-coital. You fanboys need to get out more.

Sadly, before they can get down to it, Ian and Barbara are kidnapped by some slave traders. Despite this bleak development, the witty wordplay continues to flow thick and fast (“Vicki keeps an eye on all the lyres,” gets an especially big laugh), and by the time we reach this episode’s conclusion, Sue has completely re-evaluated Dennis Spooner’s contribution to the series.

Sue: I take it all back. I like comedy, Dennis. Stick the next one on.

All Roads Lead to Rome

Sue: This is very weird. Good, but weird.

Maureen O’Brien continues to impress (“Unlike Susan, I don’t have to worry about Vicki collapsing into a fit of hysterics”), although she’s way off-beam when it comes to getting a handle on her character.

Sue: What age is she supposed to be? When she stares at William Hartnell like that, I can’t tell whether she fancies him or not. There’s a strange sexual tension when she looks at him.
Me: I know this programme is bleak and edgy, but a love triangle involving Vicki, the Doctor and Ian isn’t going to happen. Besides, there are websites out there for weird shit like that. 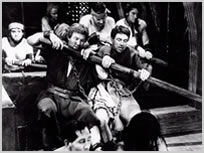 Ian struggles to adjust to his new life as a galley slave.

Sue: I’m sure this isn’t the sort of ‘in-out, in-out’ Ian had in mind when he woke up this morning.

And Sue is surprisingly forgiving when Ian’s ship is wrecked by a bucket of water and some ill-fitting stock footage.

Sue: That was pretty good, especially when you consider that they have no money or CGI. Who directed this one? He can come back again.

The highlight of this episode occurs as the Doctor and Vicki are finally introduced to Nero. When the Emperor calls for a footstool, and the Doctor attempts to sit on it, Sue declares it to be the best moment of the series so far.

Sue: That was brilliant. They should make every episode of Doctor Who a comedy.
Me: Just you wait until season 17.

When the credits roll after a very impressive sword fight (“That’s the best choreography yet”), Sue suggests we watch the next episode straight away, but rules are rules and we opt for Charlie Brooker on Sky Plus instead. She doesn’t laugh half as much, it has to be said. 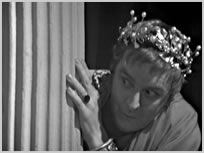 Once again, the threat of sexual violence hangs over Barbara like a bad smell, and Nero’s pursuit of her leaves a foul taste in Sue’s mouth (“It’s a bit too Benny Hill for me”). But what really astonishes her is the Doctor’s casual reaction to Nero’s disgraceful behaviour.

When the Doctor takes to the floor to deliver his Emperor’s New Tunes routine, Sue is completely captivated by his cunning (albeit familiar) ruse, and she’s tickled pink as the Doctor confesses he gave the original idea to Hans Christian Anderson (“So he does interfere in history!”) – some interesting foreshadowing I’d never picked up on before.

Sue: He’s a bloody terrible actor, but he’s very sweet. Maybe he could join them as a full-time companion. I bet he’s had a really shit life. I hope Ian doesn’t kill him.

Sue’s comments have slowed to a trickle – a clear sign she’s enjoying the story. She’ll occasionally deliver a quick compliment – “It’s very brave of them to mix high farce with bleak drama in a children’s television slot” – but she’s too wrapped up in the drama to interject very much.

Some of the directorial choices are singled out for praise, though, including the horrific moment when a soldier is stabbed by Nero and you believe – just for a second – that Barbara was his intended victim. Sue may even have gasped at that point. Or was that me? Either way, it isn’t the first or last slap on the back for director Christopher Barry. 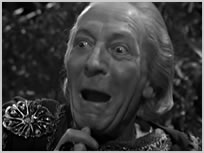 In fact, the only moment which concerns Sue is when Rome burns. And it isn’t the cobbled together special effect that disturbs her, either. No, it’s the Doctor secretly taking pleasure from the notion he gave Nero the idea.

Sue: There must have been fatalities in that fire – you’d think he’d be horrified at the thought of being implicated in it, if only by accident. He certainly shouldn’t be proud of it. I’m not very happy about that. And did Ian’s mate get out okay?

Thankfully, before Sue can be sidetracked by this story’s morally ambivalent message, she’s seduced by its rather whimsical conclusion. She loves how the Doctor and Vicki assume Ian and Barbara must have been sitting around on their backsides while they were out adventuring, and although this could come across as contrived and forced, Sue decides to embrace it with open arms.

Sue: It suits the tone of the story. It’s quite clever, really. Yes, I like Dennis Spooner a lot.

Sue: I really enjoyed that one. I’ve got a problem with Hartnell taking the credit for burning down a city and killing hundreds, if not thousands, of people, but it’s definitely the best one so far.

This is her highest score yet. I’m ecstatic; when we began this experiment I didn’t think any black and white story would rise above a mediocre five out of 10. And I would have counted myself lucky to have got that. In fact, the only thing that could spoil my mood now would be a tedious six-parter involving giant insects and a tub of Vaseline.