My friend John Williams has kindly furnished me with all the recons I need to get us through the next few months, but his Loose Canon reconstruction of ‘Galaxy Snore’ leaves a lot to be desired. It looks like it’s been sourced from a 10th-generation VHS tape, with picture distortion, hissy sound and off-locks galore. In fact, it’s so piss poor, I seriously consider buying the remastered audio soundtrack on CD so we can listen to it in the car on our way to work. It can’t be any worse than Chris Moyles, can it?

And then something bizarre and unexpected happened. A few days before we were scheduled to begin Galaxy 4, a mysterious package turned up in my pigeon-hole where I work. The jiffy bag was addressed to ‘Sue’ C/O Neil Perryman, and nestled inside the package was a plain DVD with ‘Galaxy 4’ written on it in exceptionally neat handwriting. Nothing else. No return address, no note, nothing.

When I played the DVD, I was astonished to discover that it wasn’t just any old reconstruction of Galaxy 4. Oh no. This had been augmented and enhanced with animated CGI Chumblies, filmed inserts and all kinds of Photoshop jiggery-pokery. Whoever sent it remains a mystery, but if you’re reading the blog (and I guess you are), thank you very much! I won’t tell a soul.

I tell her we’re lucky to see Galaxy 4 like this and she’s genuinely impressed by the fans’ ingenuity, especially when so little visual information about this story actually exists. Although somebody did go to the trouble of filming Vicki cutting Steven’s hair for five seconds on Super 8 film. The mind boggles. 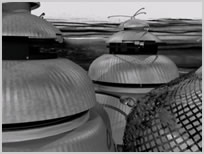 Sue: They’re quite cute in a squashed Robby the Robot sort of way.
Me: Yeah, but they’re supposed to be threatening, or at least mysterious. They just look silly.
Sue: Were they going to be the next Daleks?
Me: Only if you were clinically insane.
Sue: They’ll never catch on – you can’t impersonate them in the playground. Not unless you happen to be really small and fat. They remind me of a Henry vacuum cleaner crossed with R2-D2.

She is thrown by the six minutes of moving footage which show us the Drahvins in all their, erm, glory. All Sue can comment on is how nice the cladding inside their spaceship looks, and how one of them reminds her of Petula Clarke with a machine gun.

Sue: Okay, don’t tell me. These are the baddies and the ugly monsters are the goodies. Am I right?
Me: Brilliant. You’ve guessed the twist in the first 10 minutes.
Sue: It’s a bit obvious, isn’t it?
Me: This lot turn up in a Matt Smith episode, you know.
Sue: Piss off!
Me: They do! They end up in orbit around Earth in the episode where all the bad guys turn up at Stonehenge. We don’t see them in the flesh though, which is a shame because a race of gun-toting Barbarellas re-imagined by Steven Moffat would have been, erm, interesting to say the very least.
Sue: The complete opposite of this, then? I don’t know what you want me to say about it. It’s boring and old-fashioned. Will that do? What did you think of it?
Me: I thought it was boring and old-fashioned.

As we settle down to watch the next episode, Sue makes a startling announcement.

Sue: I still don’t understand why we’re doing this.
Me: What do you mean?
Sue: What are you hoping to get out of this? What’s the point?
Me: I’m just trying to gain a fresh perspective on Doctor Who. Oh, and a book deal. That would be nice. Besides, people are hanging on your every word. You could change fandom’s consensus about the Rills if you really wanted to. You can’t give up now.
Sue: I think you’re trying to turn me into a fan.
Me: I’m not!
Sue: Just because I refused to mark the Peter Cushing film, that doesn’t make me a fan. Just so we’re clear on that.

I think she’s been reading the blog’s comments again.

Sue: I could never be a fan, even if I wanted to. Which I don’t. I haven’t got the memory for it. I can’t even remember what the characters were called last week. I haven’t got the time or space or in my head to store that kind of information. I’m a very busy woman.
Me: Interesting use of the words ‘time’ and ‘space’ there. 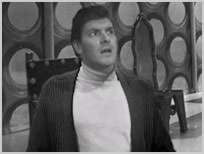 She’s right, though. We only started this experiment a couple of months ago, and yet I’d wager good money she still couldn’t tell the difference between Marinus and Xeros without a map and a Jean-Marc Lofficier programme guide.

Me: Don’t worry, I’m not trying to turn you into a fan. And when you told your girlfriend that you liked her new top because it was the same shade of blue as Matt Smith’s TARDIS, that was just a coincidence.
Sue: I had to spend 30 minutes convincing her that Matt Smith wasn’t gay after she’d seen him in that Isherwood drama.
Me: You told me you thought Matt Smith was channelling William Hartnell in the new series trailer. Admit it, Sue, you’re a fan. Embrace it, love.
Sue: Stop it. Ain’t never gonna happen.
Me: No, not with Galaxy 4 it isn’t.

The problem with Galaxy 4 is that it’s peppered with longueurs. This recon’s soundtrack doesn’t include any narration either, and it’s becoming increasingly difficult to sit through, especially after the novelty of watching your first CGI Chumbley wears off.

Some of the backchat between the Doctor and Marga manages to engage Sue for a few minutes, and she also picks up on the fact Vicki is suddenly being written as the Doctor’s intellectual equal, if not his superior, which feels a little odd. She also highlights the repetitive nature of the plot (“How many times have we seen the bad guys force the Doctor to do something for them while they hold his companion hostage? It implies that you have to force him into doing anything proactive”) but, on the whole, I think she’s bored senseless.

Sue: The base is made up of retractable stands that you usually see at exhibition halls, and upside-down swivel chairs. It isn’t doing anything for me.
Me: Oh, it’s a Rill. That isn’t something you see every day.
Sue: It looks like a giant poo. 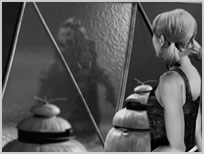 The Rill reminds Sue of Ambassador Kosh from Babylon 5. That’s probably why I married her. She especially likes the fact he isn’t humanoid and has to talk through a machine while he’s locked away in his own atmosphere. She keeps expecting him to spout obscure poetry and enigmatic riddles. Sadly, this Rill is a fairly prosaic sort of chap and he tells us what Sue has suspected for some time –the Rills are the good guys and the Drahvins are the bad guys.

Sue: I’m struggling with this. It’s just the same Chumbley going up and down, making funny noises.
Me: If by funny you mean ‘really ****ing irritating’, well, yes, that’s basically this story in a nutshell.
Sue: What was Verity doing?
Me: Working her notice, probably.

As the episode staggers towards its cliffhanger – which is so drawn out you could make a cup of tea in the middle of it – Sue’s attention turns to the reconstructed CGI-Steven Taylor who appears to have had his head stuck on top of a semi-clad Action Man. She knows the fans are doing their best but she still winces when they overshoot themselves.

Then, just to prove the Drahvins really are Amazonian Space Nazis from Hell, they torture Steven by sucking all the joy out of the room. Or is it the oxygen? It’s hard to tell at this point.

Sue: Still, if you’re going to vacuum-pack anyone, Steven is the perfect specimen.
Me: Steady on, love. Ian’s only been gone a couple of weeks.

As Steven suffocates to death, Sue makes an executive decision.

Sue: Let’s just get this over with. Let’s watch it all. Now. Tonight.
Me: Are you serious?
Sue: Look, if we don’t finish this now, I don’t think we ever will. I can’t bear the thought of the final episode hanging over me tomorrow. I’ll be depressed all day.
Me: Well, if you insist.
Sue: Just get it over with. 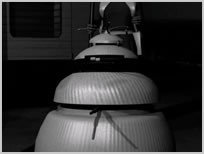 As the story limps towards its inevitable, signposted denouement, Sue’s mind begins to wander. For instance, when the Doctor talks about Ammonia bombs, all she can think about is whether the cats’ litter trays need changing or not.

Sue: I don’t know what else to say. I’m not giving you much to go on, am I?
Me: You could say practically anything at this point, Sue. Ninety per cent of the fans reading the blog won’t have seen or heard Galaxy 4, and they probably never will. In fact, on the fanometer, you are almost certainly hovering around an ‘eight’ at the moment.
Sue: In that case, I liked the bit when the Rills somersaulted over the Doctor’s head and the giant chipmunks came crawling out of the ground as the planet tore itself apart. That was pretty cool.

As the TARDIS flies past the planet Kembel, the Doctor wonders what might be going on down there. Well, you would, wouldn’t you? And then we find ourselves in a jungle where someone “a bit Lee Major-ish” is muttering to himself about the need to kill. And after Galaxy 4, we both know how he feels.

Sue: So the Doctor can pilot the TARDIS now?
Me: What makes you say that?
Sue: Well, he’s curious about what’s happening down there on that planet, so we’re obviously going to have an adventure on it, therefore he must have chosen to land there, so he must be able to fly it. And you call yourself a fan?

Sue: Well, that wasn’t very good. I think I wobbled for a second. However, I’ve seen worse, and I’ve sat through longer, and I feel like I’ve accomplished something, too. You know, like a Bush Tucker Trial or a sponsored fast.