Do I come clean and tell Sue that we’re about to start a 12-part epic, or do I postpone the inevitable and pretend it’s a two-parter? The second option will only get me so far (and a cushion in the face), so I’ve decided to take the approach that’s been endorsed by a fantastic blog called TARDIS Eruditorum, where Philip Sandifer suggests the best way to enjoy The Daleks’ Master Plan is not to treat it as a 12-part story at all (although he also suggests we skip episodes seven to 10, which, while tempting, would technically be cheating). Anyway, it’s a brilliant blog and the perfect counterpoint to ours; he’s going through the series from the beginning too, although he has some really serious and fascinating points to make about how television was made and viewed back in the 1960s, while all we do is bicker about the length of Barbara’s skirts.

Sue: Twelve episodes? Twelve?
Me: Yes, but the audience wouldn’t have known that at the time. Let’s just take it one episode at a time. If it helps, try to imagine Matt Smith’s last season as a 13-part epic. It’s that sort of thing. A bit.
Sue: Does it have a story arc?
Me: Yes, that’s it. It has a story arc. A very long and very weird story arc.
Sue: What did you say? You’re mumbling under your breath again.
Me: Sorry, it doesn’t matter. Let’s crack on.

I fire up the first recon. 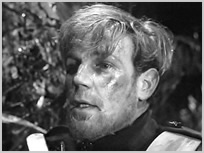 I ask her to identify the actors playing Brett Vyon and Kert Gantry.

Sue: Well, that’s the Brigadier, and that’s some bloke from Play School.

For Sue, this is as good as it gets, and I have to put her out of her misery, just as a Dalek does the same to Gantry.

Gantry’s horrific death scene is accompanied by moving images, and this brief glimpse of live action is enough to convince Sue the director did a pretty good job.

Incredible. Anyway, the episode goes down well. Sue’s pleased that Kembel is back on the agenda again, she’s delighted Earth’s security force are run by Right, Said Fred, and she’s intrigued when Mavic Chen sells everyone out to the Daleks.

Sue: Is this is the equivalent of Kofi Annan or Ban Ki-moon making a secret deal with hostile alien invaders? Charming.

Unfortunately, the cliffhanger, which involves the Daleks surrounding the TARDIS, infuriates her.

Sue: They’ve left the bloody doors open again! I hate it when they do that.

This is our first ‘real’ episode for what feels like an eternity. Even Sue, who has no problems with the recons (and has been known to prefer them), is relieved to see people’s mouths move for more than 60 seconds at a time. It also means we get our first decent look at Katarina.

Sue: She’s a lot older than I imagined from her voice and the photographs. I don’t know how long they can keep up the blissful ignorance gimmick, though, it’s already starting to wear a bit thin. It’s bad enough when the companions have to ask the Doctor stupid questions so the audience can follow the plot, but if Katarina has to ask him what a bloody key is, we’ll never get anywhere.

Mavic Chen’s ethnicity is also a bone of contention. 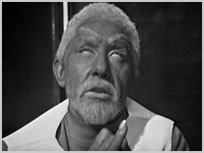 Sue: Is he Polish?
Me: No, but his face is almost certainly covered in the stuff.
Sue: I thought he was an alien at first. He doesn’t look like any nationality I recognise. He’s a pretty good actor, though. He does interesting things with his fingers.
Me: I just don’t see why a bloke who’s running a solar system would want to run a universe as well. It sounds like far too much responsibility and paperwork.
Sue: He’s an idiot if he doesn’t realise the Daleks will kill him as soon as they’ve finished with him. What a berk. And this music is bloody awful! I can’t follow a damn thing while it’s whining away in the background.

The alien delegation, who are busy plotting the downfall of our solar system, fail to instil any fear in Sue.

Sue: Is this the best they could do? A scuba diver, a leper and a mime artist? And what’s with all the slow-motion dancing?
Me: I expect he’s adapting to a different gravity.
Sue: He looks like he’s adapting to underpants two sizes too small for him.

When Zephon (an extremely bad-tempered shrub) begins ranting and raving, everything suddenly falls into place.

Sue: Okay, okay, I get it. This lot are the presidents of all the rogue nations, and they’ve got together to kick the West’s butt. And the bloke with the twigs for arms is the craziest one, which makes him the Colonel Gaddafi of the group. Am I right? 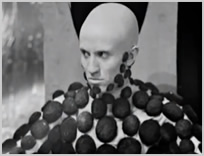 When the Doctor infiltrates the evildoers’ meeting (“Do they have to go through the minutes of the last conquest?”), Sue admires his pluck.

Sue: The Doctor has some balls to walk into that meeting, although not as many as the alien who can’t walk properly.

The Daleks’ master plan involves a priceless taranium core, or, if you’re Sue, a can of baked beans. So she’s flabbergasted when everyone runs away, leaving this valuable commodity behind for the Doctor to conveniently pinch.

Sue: Wimps. They scatter at the first sign of trouble, and yet we’re supposed to believe they’re the most fearsome and evil fighting force ever assembled. What a joke.

When all hell breaks loose, Brett Vyon decides that waiting for the Doctor to return isn’t in his best interests after all and he prepares Mavic Chen’s ship (or spar – no, I don’t understand it either) for take off. The git.

Sue: It’s just as well the Doctor doesn’t leave – his TARDIS is still there.

When the Doctor is safely on board Chen’s ship/spar/jacuzzi, Sue fixates on his inability to pilot the TARDIS. Again.

Sue: But isn’t it a bit stupid? I mean, why can’t he fly it properly? What’s the point?
Me: Because if he could fly it properly, you’d ask me why doesn’t he just nip back in time to sort out a problem, or why doesn’t he land somewhere where everything is nice and peaceful? All the ****ing time. That’s why.
Sue: It’s still annoying, though. Matt Smith doesn’t have any trouble with his.

At one point, the good guys spend an inordinate amount of time listening to Marc Cory’s recording from Mission to the Unknown, even though it doesn’t tell them anything they don’t already know.

Sue: What a complete waste of time. Terry ****ing Nation.

The spar crashes on Desperus, a prison planet where things are, well, desperate.

Me: Do you think they sent the prisoners there and then they named the planet Desperus? Or did they scout around the universe for a shit-hole with an appropriate name?
Sue: Cavemen? Again? Really?
Me: It reminds me of the penal planet in Alien 3.
Sue: Oh, great! More rapists!

Sue’s attention has begun to drift, and when the episode concludes with a prisoner sneaking onto the spar and taking Katarina hostage, she shrugs her shoulders and yawns. 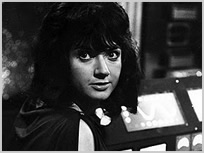 Sue: I’m starting to lose interest in this story. Nothing seems to be happening. It’s just land on a planet – narrowly escape from the Daleks – land on another planet, and then repeat. It’s… ****ING HELL!

Sue: Did she do that on purpose, or was it just a stupid accident because she doesn’t know how doors work?
Me: I think we’re supposed to go with the noble sacrifice angle.
Sue: So, that’s it, then? She’s dead? Really, really dead?
Me: Yep. Brutal, isn’t it?
Sue: So is Katarina a real companion or not?
Me: You tell me.
Sue: Well, I don’t know. Sort of, I guess. What do the fans say?
Me: Don’t pay any attention to them. But, yes, the fan consensus says Katarina is a companion. A dead companion.
Sue: I suppose she must be, then. It’s difficult to get that upset about it, though.

I tell her that Katarina was a last-minute replacement for Vicki when Maureen O’Brien and the producer, John Wiles, had a falling out and he fired her. Then I ask her to imagine that scene ending with Vicki flying out of the airlock instead.

Sue: That would have been horrific. I’m glad Vicki had a sweet love affair instead. No, that would have been terrible. And if that’s true, Katarina can’t be a real companion, after all. She was just a stand-in.
Me: But the audience wouldn’t have known that.
Sue: I don’t care. In fact, I would have been more upset if the Brigadier had died. I feel like we’ve spent more time with that character. He’s rather dashing, actually. You can see why they asked him to come back.

As Katarina’s lifeless body drifts away in the cold, inky blackness of space, the Doctor cobbles together a vaguely touching, and seemingly heartfelt eulogy. However, a few moments later, he’s suddenly back to his old, chipper self.

Sue: He’s taking it rather well, don’t you think?
Me: Katarina is the first person who dies under his care. It’s a big turning point for the series. But yes, I don’t see how they could have carried on as if nothing had happened if Vicki’s corpse had floated past that window. It doesn’t bear thinking about.

And then Jean Marsh turns up as Sara Kingdom (and no, Sue doesn’t recognise her at first). 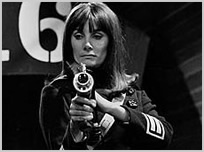 Sue: She must be the next companion.
Me: Well…
Sue: Shit! She just shot the Brigadier! What a cow!
Me: It’s worse than that, love, he’s dead.
Sue: This is turning into a bloodbath. Was he a real companion? The Doctor is getting through a lot of companions today. I’d be worried if I was Steven.

When Sara Kingdom strides (in full motion!) after the Doctor, Sue makes the obvious comparison – “It’s Emma Peel in Space” – and then she’s appalled when Sara orders her men to shoot our heroes on sight. In the head, no less.

Sue: Bitch! She definitely isn’t the next companion.

The Score So Far

Me: You’re not supposed to mark it yet! We’re only a third of the way through.
Sue: Don’t remind me.