Sue: This one has the Daleks written all over it. Even the titles look like a Dalek has written them. It’s so obvious. 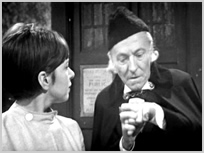 When the Doctor complains about his irritable skin condition, which he only ever gets when Daleks are in the vicinity, Sue’s suspicions are confirmed. The Doctor then decides that something is up to no-good at the newly erected Post Office Tower (“It was probably sexy, once”), and he takes Dodo with him to investigate.

Sue: If this was happening today, it’d be the Gherkin.

The Doctor and Dodo successfully ingratiate themselves into the highest echelons of British society, which is a little odd to say the least.

Sue: Wait a minute. Since when has the Doctor been known to anyone on Earth? How can he waltz into this lab? Is he using his psychic paper thingy?
Me: Yes! That’s it! I mean, er… yes, Sue, that’s exactly what he’s doing.

We learn that Professor Brett has created the ultimate supercomputer – WOTAN (with a V) – and tomorrow it will be connected to every computer in the world. All six of them. Oh, and it’s probably sentient. And insane.

Sue: So this scientist has invented the internet?
Me: Yeah, he’s the Al Gore of his day.

The Doctor heads to a London nightclub to find Dodo. It’s fab and groovy, man.

Sue: Are the Pink Floyd in this one?
Me: Poor Steven. I bet he would have loved this place.

And then the moment I’ve been dreading arrives. Yes, “Doctor Who is required”.

Me: Are you just going to let that go?
Sue: What’s wrong?
Me: Are you serious? Listen to it again.

I rewind the DVD.

Sue: Yeah? And what’s your problem, exactly?
Me: What’s my problem? WHAT’S MY PROBLEM??? They just called him Doctor Who! That’s my ****ing problem!
Sue: No they didn’t. What they said was “Doctor, who is required”. There’s a comma.
Me: There’s a what?
Sue: Doctor comma who is required. It’s fine.

Sue: Doctor comma who is required. Live with it.
Me: Don’t you think a much more likely explanation is the script editor thought the lead character’s name was Doctor Who?
Sue: Well, yes. Obviously. But you can work around that.

Sue says she’s prepared to work around production errors to create a more consistent programme, but when I tell her that some fans spend their entire lives attempting to do just that, she starts to backtrack. And then Professor Brett says “Doctor Who” again, and there isn’t any room for a comma, a semi-colon or even a hyphen. All we have is a big, fat exclamation mark.

The Doctor’s scenes in the Inferno nightclub lead Sue to conclude that someone was taking notes when this episode went out.

Sue: I bet this is where Peter Stringfellow got his look from: long silvery hair, out-of-date clothes and a slightly sinister personality. Yeah, he was definitely influenced by this episode.

And then there’s a scene that’s just plain wrong – the Doctor hanging around outside a nightclub in the early hours of the morning, arguing about the best way to get a taxi home. What’s next? The Doctor and Dodo stop off for a kebab? 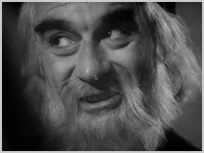 In the middle of this rather bizarre scenario, a comedy tramp turns up.

Before we can get into this, the Fagin-esque generic tramp is killed by some villains who look like they’ve just walked off the set of Police Surgeon. In fact, this tramp’s death is so earth-shattering, it immediately becomes front-page news. And then WOTAN phones up the Doctor for a quick brainwashing session, and Sue thinks she’s worked it all out.

Sue: Are the Cybermen behind this? Didn’t they take over the world with mobile phones, once? Do you remember that one? John Paul was in it.
Me: Yes, I remember. My best friend appeared in an episode of Doctor Who and he didn’t tell me. It’s been five years, love, you don’t have to keep reminding me. And no, it isn’t the Cybermen.
Sue: It must be the Daleks, then.

The Doctor breaks Dodo’s conditioning and she’s sent to the country to recuperate.

Sue: Is Dodo on holiday for the rest of this story?
Me: Dodo is on holiday for the rest of this programme.
Sue: Are you joking?
Me: No, I’m not. That’s the last we ever see of Dodo – zonked out on a chair. Her departure reminds me of her arrival: abrupt and a bit stupid.
Sue: I can’t say I’ll miss her very much. I take it Ben and Polly are her replacements, then?
Me: You’re catching on fast. What are your first impressions?
Sue: It’s hard to say. I wasn’t looking at them as potential companions until now. Ben’s very eager, isn’t he? And Polly is a bit of eye-candy for the dads, I suppose.
Me: Yeah, she’s alright. I guess.

The War Machines are revealed in all their, erm, glory.

Sue: Oh dear. Is it this week’s attempt to reinvent the Daleks? They look rubbish!

Sue: Isn’t Ben a little short for a sailor? He looks like he should be a jockey.
Me: He’s a bull terrier, always straining at the leash. I can’t tell if he’s overacting or giving it everything he’s got.
Sue: Polly is a bit bland.
Me: She’s been hypnotised.
Sue: So why haven’t they hypnotised Ben? That makes no sense. They simply assume he’ll do as he’s told, and then they leave him to it. Either they’re very cocky or very stupid.

Me: Polly married the Celestial Toymaker in real life. He wasn’t very nice to her.
Sue: Just one more reason to hate that piece of shit.

When a single War Machine takes on an entire army – and wins – Sue can’t get her head around it. 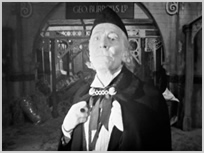 Sue: How is it winning? Is that steam supposed to be deadly? It looks like a mobile sauna.
Me: I don’t see how it can possibly stop a gun from firing. Have we missed something important?
Sue: Those arms are rubbish. It couldn’t maim someone, let alone kill them.
Me: It’s a good job this exists. Could you imagine listening to it as a recon? It’d be five minutes of whooshing, screaming and the odd crash. It would have been a nightmare.
Sue: It’s difficult enough as it is. The sound effects are doing my head in. It sounds like a dial-up modem. It’s driving me mad.

It’s all a bit of a mess. The director, Michael Ferguson, is doing his best, but he doesn’t have a lot to work with. But at least the episode ends on a high, as the soldiers decide to leg it, leaving the Doctor behind to face a War Machine alone. Or, as Sue so eloquently puts it: “This is his Tiananmen Square moment”.

All over London, the War Machines are gearing up to wipe out humanity. To be honest, it strains credibility a bit. So, to ramp up the severity of the threat, they hire a real-life newsreader to calm the populace. RTD used Paul O’Grady, Innes Lloyd employed Kenneth Kendal – the effect is much the same.

The threat still feels rather vague, though, especially when a War Machine starts smashing up a nearby warehouse for no apparent reason.

Me: I am become death, destroyer of transistor radios.
Sue: People of London, stay off the streets. Do not attempt to rescue your bins.
Me: Leave your bins. They’re not worth it.

Thankfully, the Doctor comes up with an ingenious plan to deal with this nuisance. Well, it’s ingenious if your foe is stupid enough to walk straight into a very obvious trap. And luckily for the Doctor, that’s exactly what he’s up against. 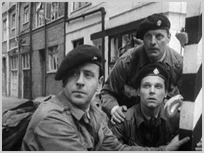 Back at the Post Office Tower, WOTAN is on the verge of world domination.

The Doctor’s reprogrammed War Machine infiltrates the Tower (“Now there’s a scene I wanted to see. How did it get in the lift?”), and it destroys WOTAN, who only has a human arse to protect it. Before we can wrap up any loose ends (is Brett going to be punished for all the deaths he’s caused?), the Doctor legs it. You can’t blame him, really.

Sue: Dodo really isn’t coming back. I thought you were winding me up.
Me: The Doctor is alone for the very first time.
Sue: It’s a bit odd that he doesn’t invite Ben and Polly to join him. Or is it? I’m not sure any more.

It doesn’t matter because they nip on board his ship when he isn’t looking.

As the TARDIS dematerialises, Nicol appears in the doorway. She tuts.

Nicol: Are you still on William Hartnell? Bloody hell, you’ll never finish at this rate!

Sue: It was okay. I can see what they were trying to do. It was very modern and ‘with it’, and I liked the way they used contemporary London, but I think the programme lost some of its mystery as a result. It didn’t feel like Doctor Who – it felt more like an episode of The Avengers. The sound effects got on my nerves as well, and the War Machines were pathetic. The plot wasn’t great, either, but the director was trying his best. Hartnell was pretty good, I suppose. Oh, I don’t know, let’s say:

Me: And that’s the end of the third season.
Sue: It seemed to go on forever.
Me: Brave heart, Susan. We’re almost there.