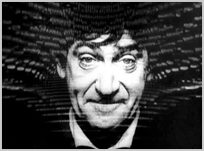 Sue: Ooh, that’s new.
Me: Proper Doctor Who titles. Finally.
Sue: He looks drunk.
Me: He looks magnificent.
Sue: He looks like a drunk who’s been arrested and had his mug shot taken. This isn’t a good look, Neil.
Me: It’s an iconic title sequence.
Sue: Shame about the font.
Me: Yes, well…
Sue: It looks like Times New Roman. Is that the best font they could come up with? It looks like something they’ve tacked on at the end when they were in a rush.

Our heroes have arrived on a futuristic colony that’s run like a holiday camp.

Sue: Going to the Med back then would have been a big deal, a real luxury. This probably looked very aspirational, especially these sun beds. Now it looks like The Only Way Is Essex.
Me: It isn’t that horrific yet, love.

A face on an enormous screen welcomes our heroes to the colony, but Sue isn’t fooled for a second. 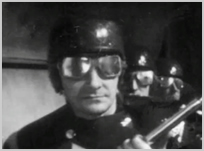 Sue: So this is basically 1984 meets Hi-de-Hi! Am I close?
Me: Do you recognise the voice narrating this recon?
Sue: No. It doesn’t sound like Peter Purves, I know that much.
Me: It’s Colin Baker.
Sue: Is it? Hang on a minute, so why is he saying “the Doctor did this” and “the Doctor did that”? Shouldn’t he say, “I did this” and “I did that”? They missed a trick there.

Sue: What am I supposed to be looking at here?
Me: It’s a Macra.
Sue: Is that supposed to mean something to me?
Me: You’ve seen the Macra before. In a David Tennant episode. The one with the talking cats and the giant crabs.
Sue: How can you remember this stuff?
Me: How can you forget this stuff? The episode featured talking cats and giant crabs! How much more memorable does it have to be?
Sue: How do we know it’s a giant crab? I’ve tried squinting at it and I still can’t make it out. There’s no sense of scale. It could be six feet tall or six inches. I don’t know if that’s the recon’s fault or the director’s. It was either terrifying or ludicrous. I honestly can’t tell. 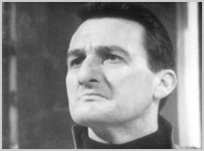 Sue: This bloke is very good. He’s definitely been in stuff before.
Me: Peter Jeffrey? I believe the producer offered him the role of the Second Doctor but he turned it down.
Sue: He’d have been good. He’d have been less scruffy for a start.

Ben, Jamie and Polly head for bed, but as they sleep, a hypnotic voice urges them to conform.

Colin Baker: Jamie was tossing restlessly…
Sue: Was he, Colin? Now there’s a recon I’d like to see.
Me: You’ll have to form an orderly queue behind Joe Orton.
Sue: This reminds me of The Prisoner. The happy façade, the brainwashing, the annoying PA announcements.
Me: They both aired the same year.
Sue: Actually, I’m starting to drift off myself…

The Doctor wakes Polly before her conditioning can take hold. And then he notices a sweet smell in the air.

Sue: Have they been pumping marijuana into that room? Now that’s a holiday camp I’d like to visit.
Me: I’m surprised you haven’t mentioned Polly’s hair yet.
Sue: You sexist pig!
Me: People need to know!
Sue: It’s very Vidal Sassoon, but it doesn’t really suit her. It’s too severe, and it isn’t doing her any favours. Okay?

Polly and Jamie resist their conditioning (and we’re not talking about hair care products here), but Ben falls for it completely.

Sue: I’m not surprised Ben has turned to the dark side. He’s a young solider who’s used to following orders without questioning them. And at least it gives him something interesting to do for a change.

Polly runs off in a huff, upset by Ben’s new, aggressive personality, but she bumps straight into a Macra. Luckily, Ben still has the presence of mind to help her.

Colin Baker: Ben started beating the monster relentlessly…
Sue: You know, I’m sure the person who wrote Colin’s narration was taking the piss. 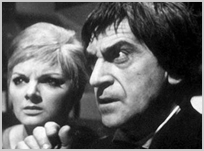 Sue: Patrick Troughton’s voice is very soothing. He’d be great on the radio.

The Doctor gives himself 11 out of 10 for solving a complicated equation.

Sue: The Doctor has some great lines. It’s a good script. But what the hell is that noise? Is it supposed to be background music, or a sound effect? I can’t tell any more.
Me: Nothing else on television sounded anything like this back then.
Sue: I’m not I’m surprised. It’s terrible. Who’s responsible for it?
Me: Dudley Simpson.
Sue: Again? How many stories does he **** up before they sack him?

Jamie escapes from a gas mine.

Sue: The marigolds and leather apron is a very interesting look.
Colin Baker: Jamie moved back along the shaft…
Sue: Seriously, how is Colin doing this without laughing?

The cliffhanger involves Jamie running straight into another Macra.

Sue: It’s probably for the best that we can’t actually see this.

Sue: Sometimes I amuse myself by imagining Matt Smith saying Patrick Troughton’s lines. Nine times out of 10, it’s really easy to do.
Me: He’s a lot more engaging than Hartnell ever was.
Sue: Yes, definitely.
Me: So you agree? Patrick Troughton is better than William Hartnell?
Sue: I’m starting to warm to him, yes.

Jamie escapes from the Macra’s clutches only to stumble into something even more sinister and horrific – cheerleaders. They mistake him for an auditionee and, well, you can guess the rest.

Sue: It’s turned into Glee.
Me: I bet Frazer Hines is pleased this episode doesn’t exist.
Sue: The producers love to humiliate the male companions. First Peter Purves, and now this. Ben must be shitting himself.

Thankfully, Ben overcomes his conditioning and saves the day, blowing the Macra to smithereens in the process.

Sue: I knew he’d come good in the end. He’s like Billy Mitchell (if Billy Mitchell was dressed as a dental technician), and he’s got a heart of gold. That’s definitely Ben’s best story so far.

The colony, now freed from tyranny, holds a joyous celebration. The Doctor joins in, wearing a majorette’s helmet.

Sue: That’s his worst yet. Even Matt Smith wouldn’t wear a hat like that.

Before the Doctor can be appointed as their new leader, our heroes dance their way out of the colony.

Sue: I wish I’d seen that. What a shame.

Sue: I enjoyed that. The Doctor is beginning to take control, and I like it. The script was pretty good, too.

Sue: I’m not convinced it would have been better if it existed. I don’t think they could have pulled the crabs off.
Me: You’re starting to sound like Colin Baker.