Sue: The Doctor should have a car boot sale. He’s a hoarder.

Aside from that little gem, Sue didn’t say very much for the first 10 minutes of The Abominable Snowmen. Either she was totally engrossed or bored out of her gourd. But she definitely wasn’t sleeping. I know because I checked.

We are both extremely grateful for Frazer Hines’ narration on this one; it carries us through several dialogue-free longueurs until Deborah Watling suddenly ups the ante by screaming her head off.

Sue: Victoria has a great pair of lungs.

Professor Travers has been searching for the legendary Yeti all his life. 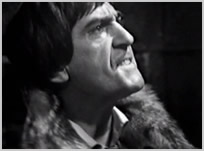 Sue: There are lots of expeditions in Doctor Who all of a sudden. Do I detect a theme? Will this guy end up paying the ultimate price for finding a Yeti? Is it another one of those morality tales where you should be careful what you wish for?
Me: Wait and see. And stop trying to jump the gun.
Sue: I’ve also noticed something odd. If this is the Himalayas, where has all the snow gone?
Me: Blame it on freak weather conditions.

And then we reach the cliffhanger, which involves one of the titular monsters harassing Jamie and Victoria in a cave.

Sue: I honestly can’t tell if the Yeti look good or not when I can’t see them moving around.

Sue: Ahh, moving images. Lovely.
Me: Make the most of it.

Sue: The location filming looks incredible for its age. Do you think this will ever be released on Blu Ray, Neil? 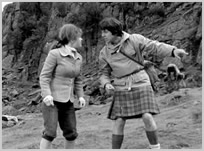 Sadly, the moving images aren’t doing the Yeti any favours.

Sue: It looks like a Teletubbie in a fur coat. I’m sure it wants to play with Jamie and Victoria. It’s cute.

Back at the monastery, the monks are talking in hushed tones about their master.

Sue: A-ha! It’s the Master! I knew he’d turn up eventually.
Me: I’m going to put you out of your misery before you tie yourself up in knots: it isn’t ‘the Master’, it’s just another ‘a master’. Sorry.
Sue: But he said, “Dok-TORRRR!” in a scary voice.
Me: Seriously, let it go.

The Doctor is deposited outside the monastery as Yeti-bait.

Sue: Why didn’t the Doctor give the sacred bell back to the monks in the first place? Why does he have to rely on Rafa Nadal getting it for him now?

Brilliantly, just as she says this, the Doctor explains – at length – his reasons for doing just that. This will score some points with Sue; she’s not used to having plot holes plugged on command like that. Then Songsten, who looks like a plump Ted Rogers, meets his master, Padmasambhava.

Sue: He sounds like Gollum. It’s a very distinctive and disturbing voice. He probably scared the kids half to death.

It’s a shame the same thing can’t be said about the Yeti.

Sue: I’m sorry, but these Yeti are too cuddly to take seriously. The Sugar Puffs Honey Monster could have this lot for breakfast. 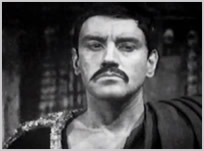 Sue: Khrisong is very aggressive for a monk, don’t you think? I like him – don’t ask me why – but it’s an odd career path for such an angry man to take.
Me: Speaking of odd career paths, what do you make of Harold Pinter’s performance in this story? He’s the guy playing the guard, Ralpachan.
Sue: He looks more like Freddie Mercury than Harold Pinter. Not that I know what Harold Pinter looks like.
Me: Don’t you think it’s a bit odd that a phenomenally successful playwright – a man who was already a big name when this was made – would sneak onto Doctor Who under an assumed name to play a bit-part?
Sue: Well, if you put it like that. Was he a fan of the show?
Me: (After a very long pause) So, you are entirely happy with the concept of Harold Pinter appearing in Doctor Who? In a bit-part? At the height of his fame?
Sue: All I know is Toby Hadoke keeps banging on about Harold Pinter being in Doctor Who, but I tend to tune out when he goes into the details.
Me: Toby will have us both killed if I don’t stress that Harold Pinter WASN’T in Doctor Who. Even if some fans – and some books written about Doctor Who – say otherwise. Don’t listen to them. And blame Rob Shearman while you’re at it.
Sue: Does this mean Kate Bush wasn’t involved in Doctor Who as well?
Me: No, that’s definitely true.

As the credits roll, Sue admits she’s struggling with the whys and wherefores of the plot.

Sue: That was pretty good but I can’t keep up with who’s controlling who any more. Isn’t this a bit too complicated, for a kid’s show?
Me: That’s probably down to me banging on about Harold Pinter for 10 minutes. Sorry.

Sue: When I was at school, I had a parka with fur lining in the hood, and if I did the hood all the way up, I’d end up with a face like that Yeti. I bloody loved that parka.

A Yeti bounces down a hill.

Sue: It looks like a fat American in a fur coat!
Me: Racist.
Sue: The Yeti aren’t scary enough. They’re missing something.
Me: A gun?
Sue: Don’t be stupid. I suppose you can get away with the bad design because they aren’t real Yeti. There is a perverse logic to it, I guess. 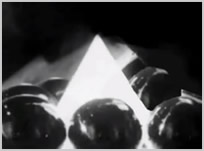 Deep inside a cave, some silver balls have been arranged in the shape of a triangle.

Sue: Are the monks praying to the snooker gods?

As the Doctor approaches a Yeti, Sue is thankful for small mercies.

Sue: It’s a good job these Yeti are robots. If they weren’t, they’d probably try to mate with the Doctor’s coat. And I can’t believe he still doesn’t have a sonic screwdriver yet. Sort it out, Doctor!

Sue: You know, I vaguely remember this. I’m sure I’ve seen this before.
Me: Are you serious? You can’t remember the Yeti but you can remember this innocuous scene where somebody is hypnotised by a monk? Are you sure you weren’t hypnotised yourself?

As we debate how likely it is that she can remember 90 uninteresting seconds from this story, the Yeti begin chasing a control sphere down a hillock.

Sue: (Giggling) They look like they’re taking part in It’s A Knockout!

And then Victoria finally comes face to face with Padmasambhava.

Through the ruin of a kitchen stalked the ruin of a man.
There were two people in the kitchen. One was a middle-aged man who wished he still had a shock of untidy hair. He wore a pair of baggy tracksuit bottoms and he was cooking an elaborate meal. Watching him was a beautiful young, old-ish woman with a pleasant, open face, dressed in the style of a county tennis player. Her name was Sue.
Sue sometimes wondered if her decision to watch Doctor Who from the very beginning had been a wise one. But now her husband was making her listen to something called a ‘Target novelisation’. She really didn’t know what to make of it but she was finding unexpected resources of courage when it came to this kind of thing.
Neil attempted to explain the importance of these novels as he chopped some onions. He even read aloud from an introduction by a scientist Sue had never heard of before. He made the books sound very interesting, and she eventually agreed to let Patrick Troughton’s son, David, read to her while Neil cooked their evening meal.
Sue looked on as Neil peered into his saucepan of chilli. She wondered what to do with her hands. “He sounds just like his dad,” she said.
Neil stirred the mince and smiled.
Some time later, when chapters nine and 10 were complete, Neil beckoned his wife over to his bubbling pot. She made a wheezing, groaning sound. “Too hot?” Neil asked. Sue frowned as she put down the tasting spoon.
Neil put the pita bread in their sprightly yellow toaster, and then they sat down to eat. Neil turned to his wife and asked her what she thought.
Sue looked up from her bowl. “I thought the narration was lovely,” she said. “He sounded so much like his father. It was uncanny at times. The music and sound effects were really good, as well. I usually find it hard to concentrate on things like this, and I’m still confused by the plot, but I thought the prose was excellent. It was very precise, but engaging at the same time. I can see how these books would have been very important before you had video recordings, but I also get the impression that they might colour your appreciation for an episode when you finally got to see it.”
“That paragraph is far too long,” said Neil, gently. 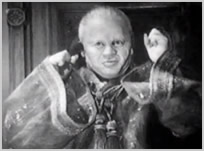 Sue: This reminds me of a dirty phone call I received once.
Me: Jesus! What?
Sue: A cross between Charlie Drake and Mark King from Level 42.
Me: The guy who rang you up?!
Sue: No! This guy – Padsdanavratilova (sic).

Songsten, who’s under the influence of the Great Intelligence, slays Khrisong.

Me: I like the way they turned a photo of Khrisong on its side to show us he was dying.
Sue: I liked Khrisong. He was very committed to his moustache.

As the Doctor battles the Intelligence, Sue is surprised when he cries out.

Sue: The sound of the Doctor screaming like that is very distressing. I wish I’d seen this. I bet it would have been very exciting.

Padmasambhava’s face appears in an extreme close-up, and the effect is, well, homespun to say the least.

Sue: Was the make-up really that bad or am I being unfair? Because it looks terrible. Then again, we’re staring at it for ages. That close-up was probably only fleeting when it was originally shown. At least I hope it was.

As Travers bids farewell to the Doctor and his companions, Sue guesses the final twist.

Sue: I bet he finds a real Yeti. Oh, look, there’s a real Yeti. At least proper Yeti actually exist, and they aren’t just silly robots with enormous arses.
Me: Yeah, imagine if they’d turned the Loch Ness Monster into a robot, or something stupid like that.
Sue: I feel sorry for the Yeti. They are nowhere near deadly enough to compete with some of the other monsters I’ve seen. Even the Macra. I notice that you don’t have a Yeti doll on the bookshelf, Neil. I think that says an awful lot.

Sue: I enjoyed that. It was two episodes too long, of course, but you can say that about a lot of Doctor Who. However, there was a calm and measured approach to the story, which I really liked. You didn’t get the hysteria you sometimes do with these things. Troughton was very good, which goes without saying now. In fact, most of the performances were pretty good. Yes, it wasn’t bad at all.