Sue: I like the Autons, but I can’t remember whether I like Robert Holmes or not.
Me: It’s complicated.

The story begins at a circus.

Sue: An old-fashioned 1970s circus. This brings back memories.
Me: Yeah, this was when you could torture lions to death in the name of entertainment.
Sue: I feel sad now. This story has lost a mark already.

Sue: The TARDIS sounds a bit funny. Hang on a minute…

Yes, it’s the moment we’ve all been waiting for! 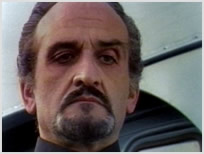 We do our Master dance. It’s exhausting.

Sue: Now that’s what I call a TARDIS! It blends into its surroundings, for a start. And I bet the Master can park it on a sixpence, too. And I bet it’s really comfortable inside.

Back at UNIT HQ, the Doctor is introduced to Josephine Grant.

Sue: She’s new, but I know she’s a companion. I just know, for some reason. So where the hell is Liz? Does the Doctor have two female assistants, now?

Meanwhile at a space radio telescope…

Sue: That’s not a bad attempt at chroma, I suppose. There’s some blue fringing around the edges, but I’ve seen worse. You should see some of BBC’s weather reports – they make this look like Avatar. 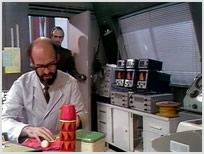 The Master interrupts a scientist as he takes his lunch break.

Sue: I remember those thermos flasks. The slightest knock would shatter them. Still, they were better than all that modern double-wrapped plastic rubbish you get nowadays. I’m sure mine was tartan.

Something else she recognises is the sphere the Master has hooked up to the telescope’s transmitter.

Sue: I recognise that thing.
Me: You should, it’s the Nestene meteorite from Spearhead from Space. Do keep up, love.
Sue: Good grief, it’s like we’re watching Lost. Should I be taking notes?

The Brigadier informs the Doctor that the Nestene meteorite has been stolen.

Sue: Ah, now that’s the uniform I remember the Brig wearing. This looks strangely familiar. And at least they mentioned Liz. Hang on, does that mean Liz never got to travel in the TARDIS? That isn’t fair. I’m not happy about that at all. She was the best companion since Barbara. She deserved a lot more than that.

While the Doctor investigates the radio telescope, another Time Lord pops in for a chat.

Sue: What the hell? 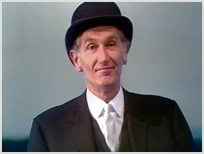 The Time Lord warns the Doctor that his arch-enemy, the Master, is in town.

Sue: Hang on, when did the Doctor last meet the Master? Have we skipped an episode? Isn’t this the first time they’ve met? I’m really confused now. And who’s this bloke? And why doesn’t he need a TARDIS to get around? What the **** is going on, Neil? And while we’re at it, when does the Time War start? How long do I have to wait before that happens?
Me: A little while yet, love.

The Doctor defuses a bomb left by the Master.

When the Doctor opens the scientist’s lunchbox, he recoils in horror.

Sue: Maybe the Doctor hates egg and cress?… Oh… Wait… Didn’t the Master do something similar to David Tennant once? Didn’t he shrink him to the size of a canary or something? That’s one hell of a power he’s got there.

The Doctor takes the bomb back to UNIT HQ.

Sue: Jo has this rock chick thing going on, I like that. She reminds me of Suzi Quatro a bit. And why is the Doctor wearing gloves that wouldn’t look out of place on a member of Slade?

Jo sneaks off to investigate a nearby plastics factory and is immediately apprehended by the Master. 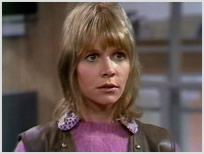 Sue: Is Jo this ditzy every week? She’d better not be.

Jo is taken inside the factory.

Sue: It sounds like there’s a swarm of bees in this office. Why is Doctor Who always so bloody noisy?

Jo is hypnotised by the Master.

Sue: Not mind control again! Bloody hell. Get a new gimmick! Having said that, the Master’s eyes are very piercing. It’s good casting, this. Is the character based on Omar Sharif?

The episode concludes with a brainwashed Jo trying to set off a bomb at UNIT HQ.

Sue: She’s not having a great first day at work.

Sue: Jo just punched that soldier in the balls! You go, girl!

Luckily, Jo is overpowered and the bomb is chucked out of the window (“Nice explosion”), and then we return to the plastics factory where Colonel Masters (“Couldn’t he come up with a better pseudonym? Does he want to get caught?”) is demonstrating a new line of products. 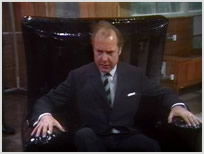 But this chair is special. This chair can kill.

Sue: Isn’t it a bit dodgy to use a household object as a murder weapon? Watchdog would have had a field day.

There’s one man the Time Lord can’t influence – the factory’s retired founder, John Farrel. So the Master gives him an ugly doll instead.

Sue: That doll definitely rings a bell. Have you shown this to me before, Neil?

Either it’s a childhood memory or she’s dredging up the time I made her watch 30 Years in the TARDIS (18 years ago, practically to the day – now that’s scary). Anyway, the Doctor decides to investigate the circus. 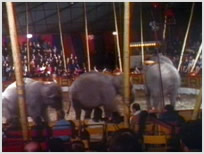 Me: The Doctor seems to like the tortured elephants. In fact, he’s positively charmed by them.
Sue: That’s another mark off this story.

Sue: The Doctor is very tanned in these scenes. Has he been on holiday? Because he’s practically orange. Did David Dickinson model himself on Jon Pertwee’s Doctor?

The Doctor is apprehended by Tony the Strongman.

Sue: Isn’t that whatshisname from the racist Cybermen story?
Me: Yes it is. Which is a good job too otherwise people would have accused you of racism.
Sue: The only racist thing in this room is your Doctor Who DVD collection, Neil.

Meanwhile a plastic doll is about to commit murder.

Sue: What the ****? Why would you chroma key a bloody kitchen? Are they trying to push the envelope here, or are they just being lazy? It’s hard to tell. 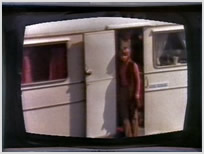 Then it’s Jo’s turn to investigate the circus. Unfortunately, we never learn what she thinks about tortured elephants.

Sue: I haven’t seen this many caravans since My Big Fat Gypsy Wedding.

Jo rescues the Doctor, however their escape is hindered by a gang of angry circus performers. The police arrive to break up the fight, but as our heroes are escorted away, the Doctor’s suspicions are aroused…

Sue: So the police are the bad guys now? That’s a bit strong for a children’s television programme, isn’t it?
Me: Questions were raised in the House of Commons.
Sue: I’m not surprised. That was irresponsible. Good though. 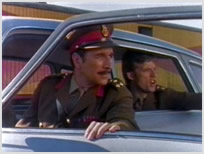 Sue: Why are UNIT driving around in an Austin Maxi? Shouldn’t they have a jeep or something?

When Yates realises that bullets can’t stop the Autons, he runs one over the edge of a cliff instead.

Sue: That’s a dummy… Oh wait… Bloody hell, it wasn’t a dummy! That was an incredible stunt! That was brilliant. I love how it got straight back up as soon as it hit the bottom. That was very scary.

The Doctor is unhappy with UNIT’s palpable lack of progress.

Sue: This Doctor can be an arsey bastard when he wants to. He’s very aloof and unapproachable in this one.

At least he managed to nick the Master’s dematerialisation circuit.

Sue: So he’s trapped a megalomaniac on Earth? Er… Thanks for that.

As the Doctor chuckles over this hilarious turn of events, the Autons make their move. 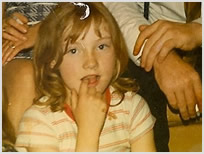 Sue: I’m sure I’ve seen this before.
Me: It’s not something you’d forget in a hurry.
Sue: Are you sure you haven’t shown this to me before?
Me: No, I didn’t own the VHS, it went out of print really quickly and became ridiculously expensive, and it’s only just been released on DVD.
Sue: Then I must have seen this when I was nine.
Me: You looked like Amy Pond back then.

When a civil servant tries to stick his oar in, the Doctor goes full-blown Tory.

Sue: I told you this Doctor was aloof and unapproachable. He’s such a pompous Tory. I bet he hangs around gentlemen’s clubs, drinking brandy and being a twat.
Me: Unless he’s acting, of course.
Sue: If this was Patrick Troughton, maybe. But look at Pertwee – he always dresses like he’s on his way to a Masonic Lodge. I’m going right off him.

A telephone engineer has arrived at UNIT HQ to install a new phone. 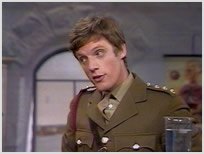 Sue: “Why such a long flex?” asks Yates, as he checks out the telephone engineer. Is the actor who plays Yates somebody’s son?
Me: Yes, I’m sure he’s somebody’s son.
Sue: No, what I mean is, is he the son of somebody who works for the production team? Is that why he got the part?

Jo makes a telephone call. On the new phone. You know, just so we remember it’s there.

Sue: Did Jo just call somebody a dolly scouts man? What the hell was that supposed to mean?

The Doctor performs an autopsy on the plastic doll.

Sue: Is that doll the Autons’ version of a Cybermat? And is it just me, or is the Brigadier a bit thick this week?

The Doctor takes his frustration out on his friends.

And then the telephone rings – yes, the new one – but when the Doctor answers the Master’s call, its inordinately large flex comes to life and tries to kill him.

Sue: If he wanted to be really evil, the Master should have reversed the charges.

Sue: Didn’t the actress who plays Jo marry Tony Blackburn?
Me: No, that’s Tessa Wyatt.
Sue: They could be sisters.

As then Mike Yates does this:

Sue: I think that may have been the campest scene in Doctor Who so far.
Me: So far, yes.

Meanwhile on the Autons’ publicity coach tour of death…

Sue: Would it have killed them to shoot this outside? They shot everything else outside so why revert to chroma key now? It doesn’t make any sense.

The Doctor wants to know what turns the Autons on.

Sue: Do hot beverages set the Autons off? Yates was making cocoa, and the old woman was making tea in her chroma kitchen. Maybe that’s the connection.

The Master and the Doctor finally meet face to face. 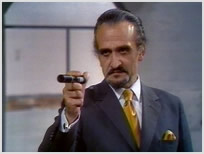 They immediately rub each other up the wrong way.

Sue: That was great. It was almost worth the wait.

As the Nestene Consciousness materialises above the telescope (“It looks like a giant hand”), the Master has a sudden change of heart.

Sue: Are they really saying that the Master’s only just realised his plan is rubbish? That really undermines him as a villain, you know.

As soon as the Nestene are repelled, the Master surrenders. But then he goes for his gun, and Yates has to shoot him.

Sue: Is the Master really dead? Doesn’t he regenerate into another actor?

But it isn’t the Master, it’s poor Rex Farrel in disguise.

Sue: Why did the Doctor smile when the Master escaped? Is he a masochist or something?

The Doctor knows that we haven’t seen the last of his arch nemesis.

Sue: Does the Master come back every year, then?

Sue: What did the circus have to do with anything? It was pointless, and so were the scenes of animal cruelty, so marks off for that. And marks off for the Doctor turning into a pompous Tory. But apart from that, it was very good indeed. Short. Colour. Nice. The direction was okay, and the stunts were amazing. The chroma key was over-used, but at least they were trying. I’ll give it: