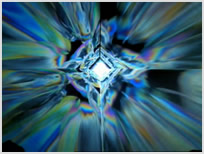 Sue: They’ve changed the titles… And they’ve missed a bit.
Me: What?
Sue: The bottom left-hand corner. They’ve missed a bit. There’s a hole in the titles. I like the new theme music, though.
Me: They haven’t changed the theme music!
Sue: Calm down! Okay, it’s very clever, especially when you consider that they didn’t have any CGI back then. You can also see the influence on the new series’ titles. Oh, The Time Warrior… Is it the…
Me: No!
Sue: Oh look, it’s Robert Holmes. I like Robert Holmes. A nice four-part Robert Holmes. This is a winner already. 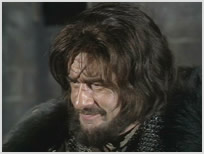 Sue: It’s Game of Thrones but with…
Me: Less incest. Yes, we know.
Sue: I like the historicals. They take me right back.
Me: Very funny.
Sue: No, I mean they take me back to the old William Hartnell stories. I liked the comedy historicals. Is this a comedy?
Me: Wait and see.

Two men named Irongron and Bloodaxe are startled when an illuminated tennis ball hurtles past a medieval castle.

She’s referring to the Sontaran ship that’s crash landed outside Irongron’s castle. And then, as Linx exits his spacecraft… 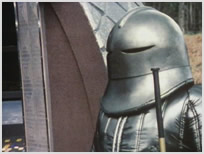 Sue: Oh, it’s the Sontarans! Are you impressed that I know that, Neil?
Me: Not really. You can’t move for Sontarans in the new series.
Sue: They’re the good guys, aren’t they?
Me: No, they are not the good guys!

Meanwhile, in contemporary England, we are introduced to Sarah Jane Smith. Sue takes to her like a duck to water. But of course she does.

Sue: She’s beautiful. And nothing like Jo. She isn’t girly at all. She’s resourceful and ballsy. I just hope she stays like this.

And then she notices that the partitions, which have been erected to house the scientists who have been assembled to work under UNIT’s protection, aren’t what they’re cracked up to be.

Sue: They’re having a laugh! There are no ceilings on those things, but the Doctor believes Sarah Jane can’t hear him because she shut the door. The scientists are basically sleeping in toilet cubicles made from cardboard. That’s shoddy design work, that is.

She’s also noticed that June Brown is playing Lady Eleanor (she keeps expecting her to stick a cigarette in her gob), and I think it’s fair to say she’s really enjoying this episode. In fact, when we reach the cliffhanger, and Linx removes his helmet, she’s completely sold.

Sue: The Sontarans aren’t as scary as this in the new series. 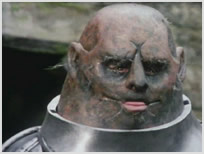 Me: I vividly remember watching this episode. It was Christmas 1973, and I was four years old. What I remember the most about it is I saw it in London, in my grandparents’ house in Stratford. My dad must have been visiting them during the holidays. Anyway, I’m sitting in front of an open coal fire… And that’s about it.
Sue: Fascinating. Do the fans think the Sontarans look like potatoes?
Me: Yes.
Sue: What about giant poos?
Me: Not so much.
Sue: The make-up is amazing. You can see why the Sontarans became so popular. It’s a brilliant design.

While we can both agree on that, we can’t agree on Sarah’s reaction to her predicament. Is she thick or pragmatic? I’m going with thick.

Sue: It makes sense for Sarah Jane to believe that she’s just walked into a Medieval pageant…
Me: Via a police telephone box? That’s bigger on the inside?
Sue: She probably thinks the Doctor has drugged her or something.
Me: Right, so the Doctor date-raped her and then he took her to a Medieval banquet. Yeah, that makes sense.
Sue: All I know for sure is Jo would have screamed her head off.

When Linx strokes Sarah’s thorax, and she barely flinches, I concede that Sue has a point. And then we are introduced to Linx’s robot knight. 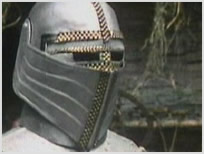 Sue: That’s pretty scary. Anything that moves but doesn’t have a face terrifies me.

It’s bloody rubbish when it comes to fighting, though.

Sue: You could just run behind it and push it over. It looks like it’s about to fall over in that skirt.

The knight is repeatedly shot by Hal the Archer, aka Boba Fett (a fact that fails to impress Sue once again – see Volume 1), but even when its head falls off, it won’t give up.

Sue: Ah, so that’s why it has a top-heavy body. It’s so the stuntman can hide in the torso. That makes sense.

The damaged knight is carted away for Linx to fix. 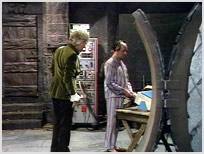 Sue can’t believe the Sontaran has not only successfully kidnapped scientists from the future, he’s got them to work for him as well. And who can blame her?

Sue: There’s too much hypnotism in Doctor Who. Every story features a character under the influence of mind control. It’s a bit lazy, don’t you think?

And then the Doctor says the word ‘Gallifrey’ for the very first time.

Me: It’s only taken 10 years, but we finally have a name for the Doctor’s home planet.
Sue: Are you sure?
Me: Yes.
Sue: No, I mean are you sure they haven’t mentioned it before and we didn’t notice?
Me: (Sternly) Quite sure, Sue.
Sue: This isn’t bad at all. It’s zipping by. I was going to watch an episode of Jersey Shore, but I’m happy to keep going if you are.
Me: Wow. High praise indeed. 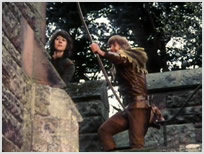 Sarah suspects that the evil wizard who everyone keeps talking about is probably the Doctor.

Sue: I like the way Sarah Jane distrusts the Doctor and doesn’t fall in love with him straight away. It makes sense for her to suspect him, especially given that he’s responsible for dragging her here. It’s clever, and it stops her looking stupid, even when she’s wrong.

Sue loves it when Irongron describes the Doctor as the “long shanked rascal with the mighty nose”.

Sue: I bet Robert Holmes couldn’t write a rubbish insult if he tried.

She likes the castle set, too. Which is a relief because Sue once met the episode’s designer, Keith Cheetham.

Sue: Didn’t I get him to talk to my university students?
Me: Yeah, in the late 1990s. When we took him out for lunch, I couldn’t stop asking him about the Sontaran spaceship.
Sue: What was I doing?
Me: Yawning, mostly.
Sue: He was a very nice man. And the carpentry in this scene is very nice, too. I can even forgive him for the toilet cubicles.

The Doctor lobs stink bombs at the enemy, although one of the explosions is a bit too close for comfort.

Sue: That bloke genuinely shat himself just then.

The Doctor offers to help Linx if he promises to stop interfering with time. But the Sontaran isn’t interested, and he shoots the Time Lord in the head instead.

Sue: I’m sorry if I’m not saying very much. I’m enjoying this too much.

Sue: I had a leather jacket exactly the same shade of green as Jon Pertwee’s velvet coat. I loved that jacket.

And that’s all I get out of Sue until Sarah Jane incites a rebellion in the kitchen.

Me: Are you pleased feminism has finally make an appearance in Doctor Who?
Sue: Of course I am. What kind of stupid question is that?

Rubeish brings the kidnapped scientists out of their hypnotic trances.

Sue: They’re taking this very calmly. Why aren’t they freaking out? Or at least taking notes?

Rubeish knocks Linx unconscious with a smack on his probic vent.

Sue: They should have rear view mirrors on their armour. That way they’d tell if an enemy was coming up behind them or not.

Irongron uses the Time Lord as target practice, but luckily for the Doctor, his men are terrible shots.

Sue: This lot are almost as bad as UNIT! 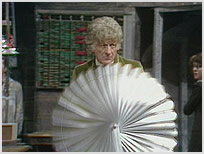 The Doctor retrieves some metallic strips from his TARDIS.

As the Doctor dukes it out with Linx, Sue offers some advice from the sidelines:

Sue: Just stick your finger in his vent!

Linx tries to leg it but Hal shoots him where it counts.

Sue: What a shot! 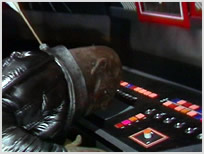 Linx’s ship explodes with such force, it has to be realised with bad stock footage. Incidentally, when we were skimming through the obligatory documentary on the DVD later (mainly so Sue could see what Keith Cheetham looked like), we accidentally watched this scene again with ‘new and improved’ CGI effects. And it actually looked worse.

Sue: I know students who could do better than that.

Sue wants Hal to join the Doctor and Sarah Jane on their travels, and she feels sorry for the poor sod when he’s left behind.

Sue: That’s a shame. UNIT could do with a good shot.

Sue: It fell apart at the end. It started well but it ended up as a bit of a farce. Sarah Jane was great, and the Sontaran looked good, but the plot was a bit silly. I think Robert Holmes was bored – or rushed.