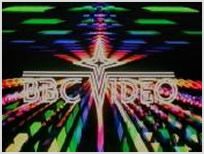 Sue: Is there anything I should know before we start?
Me: Only that this story was the first one released on video.
Sue: Any particular reason for that?
Me: Well, fans who attended the official Doctor Who convention at Longleat in 1983 were asked to suggest which story they’d like to see released first. And this one won.
Sue: So it must be a good one, then.
Me: The video cost £30 quid in 1983. That’s over £100 in today’s money.
Sue: It’s a good job it isn’t 1983 today, Neil, or our relationship would be in serious trouble. 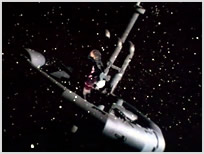 Sue: So what are the Cybermen revenging against, exactly? Is it revenge for what the Doctor did to them the last time they met? I don’t remember what happened then, so I hope it isn’t important.

The episode begins with the Doctor, Harry and Sarah floating in space.

Sue: It’s the inflatable beach toy again. At least they got their money’s worth out of it.

Once he’s safely back on the Nerva Beacon (aka the Ark), Harry tries to keep the Time Ring as a souvenir, but it disappears before he can pocket it.

When the Doctor opens a door, a human corpse falls to the floor. Still, makes a change from a Wirrn, I suppose.

Sue: Is this place cursed?

In the corridor there are piles of… Well, er… 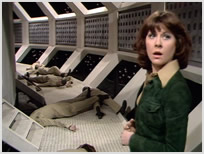 Sue: Is it the Autons? Have the Autons joined forces with the Cybermen?
Me: Er…
Sue: Don’t tell me they’re supposed to be human bodies! Don’t be ridiculous!

I apologise profusely. Like it’s my fault the director thought he could get away with littering the set with mannequins.

Sue: They must have run out of money. Either that or the Cybermen can turn people into shop window dummies now.

When we meet the surviving crew members, Sue is immediately drawn to William Marlowe as Lester. She vaguely recognises him from The Mind of Evil (or ‘The One in the Prison’, if you happen to be Sue). But she also recognises the Cybermats, too.

Sue: I love the Cybermats. Cybermats are cool. The cats would love a Cybermat to play with. The doors are very impressive in this story, too. They’re swishing together very quickly, which makes for a nice change.

Meanwhile, on the planet Voga, two aliens are talking about the Cybermen.

Me: I love the way the Cybermen are dropped casually into the conversation like that. There’s no attempt to hold them back as a surprise, or anything like that.
Sue: Er, the clue is in the title, Neil. 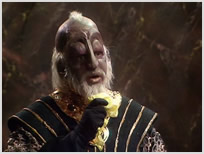 Sue: Did he just call him “your arse”? I’m sure he just mentioned his arse. Then again, it’s hard to hear anything under their stupid masks.

Back on Nerva, a crew member named Warner is attacked by a Cybermat.

Sue: No they aren’t.

That made me smile.

Sue: And where the hell are they, anyway?

Warner dies from his Cybermat bite. The Doctor wishes he could have reached the poor man sooner.

Sue: Then you should have spent less time on the episode’s back story and more time looking for a bloody cure.

It’s around this point Sue starts to rebel against the incidental (or is should that be accidental?) music.

Sue: This isn’t Dudley. This is dreadful.

And talking of dreadful music, when the Doctor describes Voga as the planet of gold, Sue just can’t help herself: 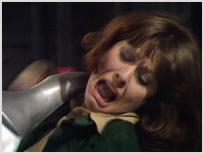 The episode concludes as Sarah fends off a Cybermat.

I try to stifle my giggles. It looks atrocious! But no one cares what I think, so I’ll shut up.

Sue: I’m enjoying this. It’s just the music that lets it down. 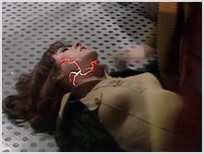 Sue: I had a shirt like Sarah Jane’s. It’s a Ben Sherman, I think. She suits the combat look.

The Doctor tells Harry to take Sarah to the surface of Voga via a transmat beam, as this will cure her Cybermat bite. If only he’d thought of that before Warner expired.

Sue: I like this location. It would be a good base for a Bond villain.
Me: It’s Wookey Hole. You know, next door to Stumphole Cavern.

Back on Nerva, Lester takes Kellman from behind.

Sue: He’s strong, isn’t he? He’s twisting his gun’s nozzle out of shape.

That wasn’t a euphemism by the way. Anyway, the Doctor explains that the Cybermen are only susceptible to one thing: gold.

Sue: Since when? That’s the first I’ve heard of it. So how does gold suffocate them? Do you have to ram a bullion bar down its gob? And speaking of Cybermen – where the hell are they? 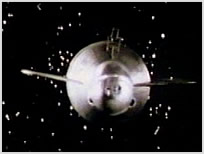 Right on cue, a spaceship appears.

And then – finally! – we meet the ship’s occupants.

Sue: Why has that Cyberman got black handles on his head?
Me: He’s the one in charge.
Sue: Really? He looks unfinished to me.

The Doctor threatens Kellman with a Cybermat unless he tells him what’s going on.

Sue: The Doctor’s turned into Jack Bauer. And is that a sound effect or is that supposed to be music? It’s never a good sign when I have to ask that question.

Sue doesn’t recognise Kevin Stoney when he turns up as an elderly Vogan (I know, I can’t believe it either!) so I have to tell her. 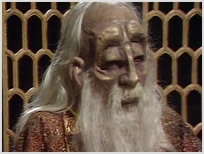 Sue: Why would they bury an actor as good as him under all that plastic crap?

As the Vogans bicker, Sue finally loses her patience.

Sue: I can’t keep up with who’s who, who wants what, when, why, where or how. I just don’t give a shit any more. I hope the Cybermen do something soon.

And then Sue is actually impressed by something. It occurs when Sarah Jane flees from the Vogans and their bullets ricochet off the cave walls. I must admit, it does look spectacular.

Sue: It’s all over the place, this.

A spaceship is still approaching Nerva. Who could it possibly be?

Sue: It’s the ****ing Cybermen, you idiots! You’ve been talking about them endlessly for hours, and now you’re surrounded by ****ing Cybermats. Who the **** do you think it is? The ****ing Master?

As the ship docks, the Doctor rushes off to the airlock shouting the word on everyone’s lips: “Cybermen!”

Sue: They’re laying the marimbas on a bit thick. It must be serious.

The Cybermen exit the airlock and kick arse. 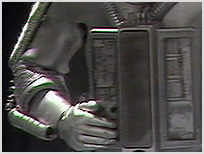 Sue: They should be playing accordion music right now.
Me: That’s cruel, Sue.

The Cyberleader takes control of Nerva.

Sue: He’s very angry for a Cyberman. They’re usually monotone, and unfeeling, aren’t they? This is a bit of a departure, but I think I prefer it.
Me: Are you insane, woman?!
Sue: I can understand everything he’s saying.
Me: I give up.
Sue: I admit they aren’t as scary, but at least he makes sense. Nice arse, too.
Me: Now I really do give up.

The bombs carried by the Doctor, Lester and Stevenson are supposed to crack Voga in half. 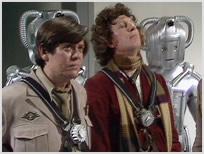 Sue: So they’re basically suicide bombers?
Me: If suicide means being blown up by somebody else and you don’t want to die, then yes.

Meanwhile on Voga, the planet of gold…

Sue: I couldn’t give a shit about the Vogans. I tune out when they appear. I don’t know who’s who, which ones are good, which ones are bad, what they’re trying to achieve. And I don’t care, either. And considering this planet is supposed to be made of gold, it’s a bit of a shit hole, isn’t it? It should look like Lady Ga Ga’s apartment.

The Doctor accuses the Cybermen of being a pathetic bunch of tin soldiers skulking about the galaxy in an ancient spaceship.

We’re told that the Cybermen were defeated by a glitter gun.

The Cybermen send the Doctor, Lester and Stevenson to Voga with bombs strapped to their backs. 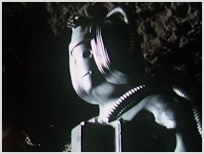 Sue: When the Cybermen hang around in dark caves and don’t say a word, they’re pretty good. But shouldn’t these Cybermen be dead already? They don’t like gold because it kills them, and yet here they are standing in the middle of a planet that’s made from the stuff. This should be like Superman visiting a planet made from Kryptonite, shouldn’t it? Why haven’t they keeled over yet?

Sue: I don’t get it. If he wanted to work against the Cybermen, why did he try to kill the Doctor?
Me: Maybe he’s a good bad guy? Or a bad good guy. I don’t know! Maybe he hates everyone.

And then another Cyberman decides to pipe up.

Sue: Now this guy is playing the part with no emotion. It makes the Cyberleader stick out like a sore thumb, though. Somebody didn’t read the memo.

When a rockfall renders the Doctor unconscious, Harry desperately tries to remove the bomb that’s strapped to his back.

Sue: Another good cliffhanger. And that’s the only good thing I can say about this. 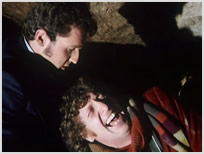 Harry Sullivan is an imbecile!

Sue: I could imagine Matt Smith saying that to Rory Pond.
Me: If he got Rory’s name wrong.
Sue: You know what I mean. That jokey shouty thing he does.

Nicol joins us as the Doctor and Harry arm themselves with fistfuls of gold. 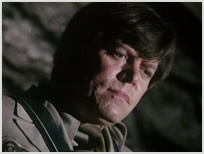 The Doctor and Harry ambush the Cybermen with gold dust while Lester watches on from afar.

It turns out he was steeling himself to be the suicide bomber that Sue always suspected him to be.

Sue: Oh, fair enough. That was brave. Hang on a minute… The Cybermen are going to blow up a planet with three bombs, but that one barely took out a couple of Cybermen. I’m not convinced.

When the Doctor learns that the Vogans plan to blow Nerva out of the sky with a rocket, he demands 15 minutes to rescue his friend.

The Cybermen revert to Plan B, which basically involves them crashing Nerva into Voga.

Sue: Plan B should have been Plan A; I bet Plan C is a belter. 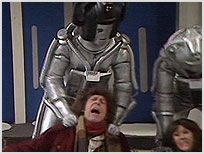 The Vogans launch their Sky Striker, which looks a lot like an Apollo Saturn V rocket, which makes Nicol laugh her head off. The Cyberleader is so annoyed by this, he gives the Doctor a vigorous neck massage.

The Cyberleader struts around the place with his hands on his hips.

Sue: Either he’s suffering from backache or he thinks he’s it.

The Cybermen evacuate Nerva, leaving the Doctor and Sarah to face “the biggest bang in history”.

Nicol: (Incredulous) Really? Are they absolutely sure about that?

The departing Cybermen are destroyed by the Sky Striker.

The Doctor wrestles with Nerva’s controls. 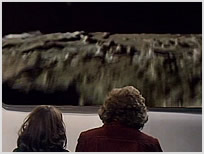 Sue: It’s a wood-turning lathe with shit smeared over it. I can see what they’re trying to do, but it looks stupid.

Nicol is laughing too much to get any words out as the Doctor steers the space station to safety. And then the TARDIS turns up.

Sue: It was waiting for this bloody story to end.

The Brigadier has called the Doctor back to Earth.

Sue: Is he going to work for UNIT again?
Me: It certainly looks that way.
Sue: Thank **** for that.

Sue: What a load of rubbish. It started off all right, but then it went downhill. The Cybermen were rubbish, the aliens were rubbish, the locations were completely wasted, the direction was terrible, and the plot was impossible to follow. Tom Baker had some nice moments, but basically it was a mess.

Me: That’s the end of Tom Baker’s first season.
Sue: Really? Wow. It flew by. That wasn’t a great story to finish the season on, mind. I hope some decent stories come along soon.