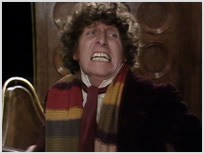 Sue: I’m not thrilled with the cheesy narration, but I can live with it.

The Doctor is travelling to Gallifrey when he’s overcome by a prophetic vision.

Sue: Okay, pause this for a second, please. What just happened?
Me: The Doctor has had a premonition. He saw himself assassinating the Time Lord President in the future.
Sue: I didn’t know he was clairvoyant. He kept that quiet.

Gallifrey’s security service identifies the Doctor’s TARDIS as the property of a convicted criminal.

Sue: I thought the Doctor had been forgiven? You know, when he saved everyone from being eaten by a black hole a few weeks back. And he’s been working for the Time Lords, on-and-off, for years. They have very short memories.

The Doctor ponders his next move.

Sue: It doesn’t seem right to me having the Doctor on his own like this. I’m guessing the new companion will turn up soon. They’re usually easy to spot. Hang on, is that a bong? There’s no time for that! People usually hide their bongs when the police turn up…

The Doctor escapes to the Capitol.

Sue: I expected better. I thought security on Gallifrey would be a lot more formidable than that.

The Master, for it is he (not that Sue suspects a thing), is skulking in the darkness.

Sue: Gallifrey looks like an ‘80s disco. I haven’t seen this much dry ice since I saw Gary Numan in concert.

Castellan Spandrell and Coordinator Engin learn the Doctor has undertaken missions for the Celestial Intervention Agency.

Sue: So the CIA are like…
Me: The CIA? Yes.
Sue: Right. That actually makes sense.

It doesn’t take Sue long to warm to Spandrell.

Sue: He’s an odd actor, but I think I like him. There’s something loveable about him, even if he is a bit bizarre.

When Spandrell and Engin discuss the significance of the Doctor’s Prydonian seal, Sue asks me to pause the DVD again. 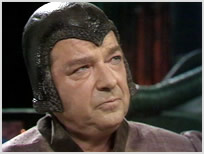 Sue: Okay, so what does that mean?
Me: Well, it’s a bit like Harry Potter.
Sue: That doesn’t help. I’m a grown woman, remember?
Me: It’s a chapter house.
Sue: Like a posh boarding school?
Me: If you like.
Sue: So Gallifrey is basically Oxbridge? This is a lot for me to take in. I feel like I’m drowning in information.

We see the Master again and SHE STILL DOESN’T SAY IT. Later, when I ask her why it never crossed her mind, she’ll tell me it’s because she thought he looked like a completely different alien species. Which makes sense, I suppose.

Sue: So this is a Gallifreyan jubilee?
Me: More like an abdication.
Sue: I’m surprised the Time Lords have television. What do Time Lords watch when this isn’t on? Do they have Gallifreyan game shows?
Me: If you say The Regeneration Game, I’ll have to kill you.

Gallifrey’s top broadcaster was one of Cardinal Borusa’s pupils at the Prydon Academy.

Sue: So Runcible was a media student? 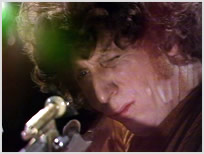 And then the Doctor shoots the president, but Sue isn’t fooled for a second.

Sue: They cloned a double from the Doctor’s bio-data thingy.

She’s awfully smug about this.

Don’t worry, I stopped the episode as soon as the credits kicked in (Philip Hinchcliffe wasn’t that keen on anagrams) so Sue is none the wiser, which is just the way I like it. 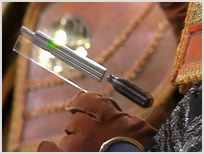 Sue doesn’t like it when a cliffhanger is resolved unfairly, which means she’s furious when she spots a second gunman in the reprise.

Sue: How am I supposed to get it right when I don’t have all the evidence?

The Doctor is tortured, placed on trial and sentenced to death, which leaves him no choice but to invoke Article 17.

Goth conspires with the Master. He tries to hide it by putting on a raspy voice (for whose benefit, exactly?) but Sue isn’t stupid. His enthusiasm for the Doctor’s execution gave him away, apparently. Incidentally, Goth calls the Master “master” at one point, but she still doesn’t bite.

Sue: He looks like Darth Vader without his mask on.

The Doctor scours the scene of the crime for any evidence that will exonerate him.

Sue: The set is very creaky. It looks great, but it sounds bloody terrible.

When the Doctor discovers the shrunken body of a camera operator, Sue understands its significance straight away.

Sue: It can’t be the Master. It doesn’t look anything like him.

I don’t think she gets it.

Sue: What a terrible thing to regenerate into. He pulled the short straw, there. If I were him, I’d kill myself and start again.

The Master has tampered with the Matrix – a living mind that stores the cells of every deceased Time Lord. 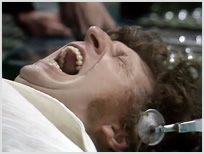 Sue: So is the Matrix like…
Me: The Matrix? Yes.
Sue: Is that a coincidence? If it is, it’s a big one. Even the colour scheme is the same. All those greens… If you bought 100 Matrix DVD box sets and you stacked them up, you’d have a Gallifreyan pillar.
Me: That would cost you at least £100.

When the Doctor enters the Matrix, he’s attacked by a crocodile/alligator (we honestly don’t know – please don’t write in).

Sue: Time Lord heaven is a bit shit, isn’t it? I mean, if this is where Time Lords go when they die, no wonder they try to put it off as long as possible.

The Doctor ends up on a surgeon’s table in the middle of nowhere.

And then the episode concludes with the Doctor facing an oncoming train.

Sue: That was great. Let’s watch the next one.
Me: We can’t. You know the rules. Trust me, it’s a lot better if the cliffhanger stays in your mind’s eye. For a whole day. 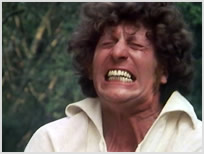 As luck would have it, we’re celebrating World Goth Day (yes, it really is a thing) on Goth World. Even Nicol dropped by, which means Sue has to tell her what she’d missed so far.

Sue: He’s in a virtual reality called the Matrix. What do you think of that?
Nicol: It’s like Inception.
Me: It’s more like The Matrix.
Nicol: I was being sarcastic.
Me: Right, well you might want to work on that.
Sue: It’s a brave thing to do, for its time. It’s unnerving because you don’t know what will happen next.

The Doctor is haunted by a laughing clown in a desert. 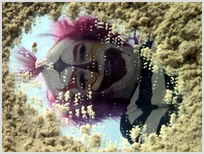 Me: That terrified me when I was seven.
Sue: You don’t like clowns very much, do you, Neil?
Nicol: So is this where you get your fear of clowns from?
Me: No, it’s clowns that give me my fear of clowns.

It becomes abundantly clear that Goth controls this reality.

Nicol: So it really is like Inception. His mind is creating this world, and the other mind has to deal with it. So there.

The Doctor is strafed by a biplane.

Sue: I like the North by Northwest reference. They’re definitely pushing the boat out, here. But the machine gun on the plane is pointing up at the sky, so that’s bad direction, I’m afraid. 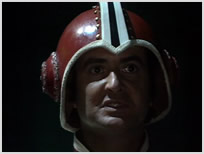 Meanwhile, back in the real world, the Master dispatches a hypnotised slave to sabotage the Doctor’s connection to the Matrix.

Sue points at the new Master.

Sue: What do you make of that, Nic?

Nicol rolls her eyes, but what do you expect from someone who thought The Texas Chainsaw Massacre was a comedy. Yes, I know she’s right, but for her to work that out at the age of 14 still worries me.

Sue: I really like this fight scene. It’s realistic because it’s so clumsy. 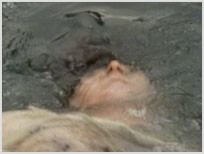 The episode ends with one of Doctor Who’s most notorious cliffhangers, as Goth holds the Doctor’s head under the water.

Sue: This is exciting.

That’s all I get out of Sue for a while. But then the problems start…

Sue: I can’t understand a word the Master says. I bet he has a hard time hypnotising anyone with that voice. “You will &*^&%& me.” Eh? Sorry? What?

The Master leaves Goth to die an agonising death.

Sue: Well, he certainly made the most of his death scene. Good actor, though.
Me: Bernard Horsfall played a Time Lord in The War Games. He exiled Patrick Troughton to Earth.
Sue: Did he really? I thought he looked familiar. That’s nice continuity, too. 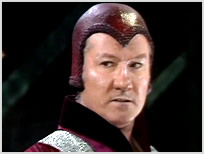 Sue: What a slimy git.

Sue: Are these two old men the new companions?
Me: I’d love to say yes.
Sue: They’re very sweet. I couldn’t see them running up and down any corridors, though.

The Master is dead, but Sue doesn’t buy it for a second. 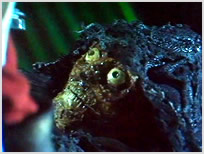 Sue: Right, so is this the same Master as the one we saw before? Or is it supposed to be the same one? And yes, I know it can’t be the same one, but do you know what I mean?
Me: No one knows for sure. The Master could have regenerated several times before he ended up like this.
Sue: Okay, that makes sense, because he sounds nothing like Roger Delgado. So has the Master been injured? He didn’t regenerate into this, then?
Me: I believe so. And because he’s on his 13th life, he can’t regenerate any more.
Sue: So how was he injured?
Me: I don’t know.
Sue: I bet he made a deal with some aliens and they betrayed him. That’s how he’s raced through his regenerations while the Doctor is still on his fourth.

The Master and the Doctor fight over the Eye of Harmony.

Sue: I’m losing interest. I’m not sure what the hell I’m supposed to be looking at. I just know it’s bad. It’s a shame, but what else can you do in a TV studio? They should have done this in the Matrix. 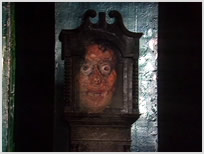 The Master falls into a black hole and the Doctor bids Spandrell and Engin farewell. But the Master isn’t dead and he escapes in a TARDIS disguised as a grandfather clock.

Sue: I think the Doctor knew the Master was still alive. He gave that clock a long, hard stare before he left. I think he likes having the Master around. I don’t know why, but he does.

When the Master’s TARDIS dematerialises, his face is superimposed over the clock face.

Sue: There was no need for that. It makes it look like the Master’s TARDIS is really cramped.

Sue: The ending let it down. The first three episodes were perfect – it was heading for a nine or a 10 when they were in the Matrix – but the last episode felt like it had been directed by a completely different person. I wasn’t sure what was going on at the end. I don’t know how I feel about the Master coming back like that, either. The whole thing seemed a bit off. And the ending was contrived – they should have battled it out in the Matrix, that would have been more interesting. Having said that, the first three episodes were as good as it gets.

I make Sue read an interview with Jan Vincent-Rudzki, who famously slagged off The Deadly Assassin in 1976, while he was president of the Doctor Who Appreciation Society.

Me: Do you agree that the Time Lords in this story bear no resemblance to all the Time Lords we’ve seen previously?
Sue: No. The bad guy was the same Time Lord who exiled Patrick Troughton to Earth. Of course it’s the same Time Lords.
Me: What about his criticism that Time Lords wouldn’t have bad hips?
Sue: Well, if you regenerated every time you had a twinge in your hip, you’d get through your 12 lives pretty sharpish, wouldn’t you? And if they had unlimited regenerations, they’d all look like the Chippendales.