Before you ask, yes, Sue knew The King’s Demons was only two episodes long. In fact, she could barely contain her excitement.

Sue: I’m especially looking forward to visiting Turlough’s home planet so we can get to the bottom of where he comes from, and what he was doing in that bloody school.

Sue: Turlough’s home planet isn’t what I was expecting. They seem to be stuck in the Middle Ages.

Sue: At least the incidental music sounds appropriate this week. That’s something.

The feast suddenly turns sour when an argument between King John and a nobleman named Ranulf results in a duel between Ranulf’s son, Hugh, and a very fiery Frenchman.

Sue: This is Earth, isn’t it?
Me: Yes.
Sue: Does that mean they’re going to do a proper historical again? You know, without any silly aliens running around?

Turlough doesn’t seem to care that the TARDIS has landed on Earth again. In fact, he never mentions his home planet once.

Sue: So why did he bring it up in the last story? What was the point?

In other news, Tegan has changed into her third costume in as many years.

Sue: Can we turn the contrast down a bit? Her outfit is blinding me. 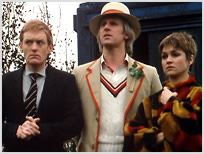 The Doctor and his companions arrive in the middle of a jousting tournament. King John welcomes them as his demons.

Sue: He’s very calm, considering what’s just happened. I thought he’d want to burn them at the stake or something.

The Doctor decides to stay for a bit.

Sue: At least the Doctor shut the TARDIS door behind him. He’s learning.

The Doctor takes a seat next to the King and we are treated to a thrilling duel between Sir Gilles and Hugh. Hugh is unseated from his horse and Sir Gilles moves in for the kill.

Sue: If this was Game of Thrones, he would slice his bollocks off without a second thought.

Sue: They must be freezing to death out there. Especially Turlough. I think he’s coming down with hypothermia, bless him. 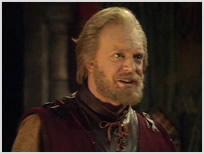 The actor who plays Ranulf eventually rings a bell.

Sue: His voice is very familiar.
Me: He is pretty famous.
Sue: It will come to me eventually. His beard doesn’t exactly help.

Hugh (who reminds Sue of a young Hywel Bennett) turns against the Doctor and his friends.

Sue: You ungrateful ****. He just saved your life!
Me: Do you recognise the actor who’s playing Sir Gilles?
Sue: No. He isn’t French, though. South African, maybe, but definitely not French.

And then Sir Gilles appears in a close-up…

Sue: He has a very rubbery face. Hang on, I think it actually is made from rubber. Wait a minute… I know that style of overacting… It’s the Master!
Me: Is that a question or a statement?
Sue: No, it’s definitely him. I’m positive!

Sue is on a roll, because a few seconds later she manages to recognise Ranulf, too.

Sue: He used to sell life insurance to the over-50s in the ad-breaks during Countdown. I think you got a free pen or a carriage clock when you called him.
Me: Yes, that’s exactly what Frank Windsor is best known for. Well done, you.

Sue: The king has been hypnotised by the Master. It’s so obvious.

Sue: We haven’t even reached the first cliffhanger yet! What kind of companion are you? 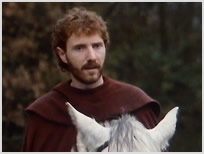 Ranulf’s cousin, Sir Geoffrey, arrives at the castle on horseback.

Sue: I must say, this looks very nice. Very Robin Hood. Wasn’t Robin Hood a big thing back then?
Me: Robin of Sherwood came out the following year. Were you a fan of that?
Sue: No, I had a life.
Me: But it was on ITV.
Sue: Gary probably watched it then.

Four guards are sent to collect an Iron Maiden from the dungeons.

Sue: That’s the Master’s TARDIS, you know. I could write this rubbish.

Back in the hall, King John entertains his guests with a song.

Sue: Who let Jethro Tull into the building?

I’m a little drunk so I decide to sing along.

Sue: What’s this song about?
Me: Killing Muslims.
Sue: It’s a nice tune, but he really needs to work on the lyrics.

The Doctor and Sir Gilles get into an argument.

Sue: How can the Doctor fail to recognise his arch-enemy? It’s preposterous! Look at him!
Me: Listen to him!

The Master’s accent is getting riper by the second. 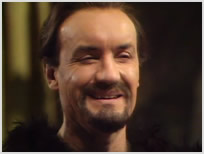 Sue: (As Inspector Clouseau) Do you have a license for your minkey?

The Doctor and Sir Gilles have a sword fight.

Me: Of course, this isn’t the first time the Doctor and the Master have gone at each other with swords.
Sue: Yes, I remember. That fight was a lot better than this one. Jon Pertwee ate a sandwich in the middle of it, and he didn’t give any to Jo. I’ll never forgive him for that.

The episode concludes with the Master finally discarding his disguise. 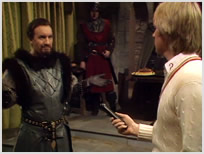 The Doctor takes the Master’s Tissue Compression Eliminator away from him.

Sue: If I were Tegan, I’d walk up behind the Master and cut his head off with my sword. And then I’d say, “That was for my auntie!”

The king’s men place the Master in the Iron Maiden. However…

Sue: I knew it was his TARDIS. The Master is taking the piss!

The Master’s TARDIS materialises in the dungeon where Turlough is being held.

Sue: Turlough’s thinking: “How many guys dressed in black has the Doctor pissed off over the years?” 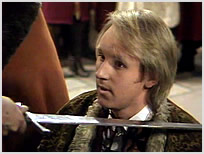 Meanwhile, the Doctor is knighted.

Sue: If that isn’t a real king, does it still count?

The Doctor decides to keep the Master’s TCE.

Sue: If you had a device that could shrink things, you wouldn’t stick it in your trousers. It might go off in your pants.

Sue isn’t engaging with The King’s Demons, and she thinks she knows why.

Sue: It looks great – the sets are fantastic – and it’s directed very nicely too, but the plot isn’t doing anything for me. It’s just a tedious runaround in a castle.

However, just when the boredom threatens to overwhelm her, she is introduced to Kamelion.

Sue: Well, I didn’t expect that. Its design is fabulous. It looks like a glamorous crash test dummy. ****ing hell, it actually moves! I bet that didn’t come cheap. 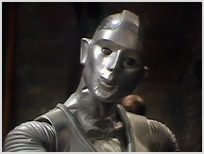 Kamelion can transform himself into any person his user wishes.

Sue: And he’s got man boobs!

The Doctor believes that Kamelion has a mind of his own, but the Master is adamant the robot won’t turn on him.

Sue: Are you insane? Everybody turns on you!

The Master wants to become the Emperor of Chaos.

Sue: That sounds like a really depressing job title to me. How could you run an empire based on chaos? No one would do what you told them. He hasn’t thought this through, you know.

The Doctor forces Kamelion to take on Tegan’s appearance and Turlough ushers ‘her’ into the TARDIS as he brandishes a sword like a maniac.

Sue: I love Turlough. He never does anything by halves.

The Master is furious. 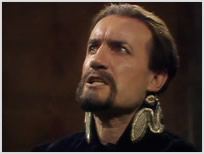 It doesn’t take long for Kamelion is get his feet under the TARDIS console.

Sue: Is Kamelion a companion?
Me: It certainly looks that way.
Sue: No way! How’s that going to work?
Me: Wait and see.
Sue: Actually, they could get a different actor to play him each week.

Sue: Come on, Tegan, just take it back to your room and think really hard about Simon Le Bon.

The Doctor has had enough of Tegan’s bleating and he threatens to take her home.

Sue: You can’t blame the Doctor; she really is a stroppy cow. And if by some miracle he does end up missing her, he could always ask Kamelion to impersonate her. Sorted.

Sue: So that was the end of Peter Davison’s second season?
Me: Yes.
Sue: Oh…

Sue: That was rushed. I think they were desperately trying to pad out the season, and they just threw that together when time was running out. The performances were okay, and the sets and locations were very nice, but it didn’t go anywhere. Who cares?
Me: What are you going to give it?
Sue: Well… 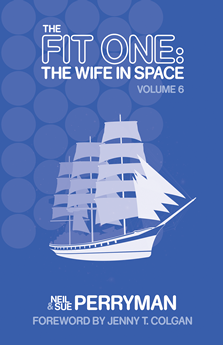