Thanks to everyone who sent in a question. We received over 100 submissions in the end, and I had to whittle them down for the sake of Sue’s sanity. I’m sorry if I didn’t include your question this time. 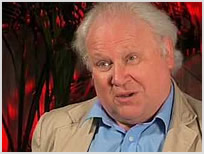 Me: Okay Sue, you’ve seen Trials and Tribulations.
Sue: Good documentary. Bit sad, though.
Me: Anyway, you are now well versed in what happened to Colin Baker, which brings us nicely to the first question (asked by many, including Sarah Hadley and Dave Sanders):
Jonathan Morris: Five minutes after the last episode of The Trial Of A Time Lord, you have been made the new producer of Doctor Who. What do you do?
Sue: Can I keep Colin? I’d give him one more season but I’d change his costume. The first episode would see him burning it on a bonfire. He wouldn’t meet Bonnie Langford until the last episode, at which point the Doctor would suddenly realise that he’s been in the Matrix all this time and he’s still on trial. I’d do it all on location and I’d get Led Zeppelin to do a version of the theme tune. I’d keep the episodes at 25 minutes and I’d get a really fit companion for the dads. One that gets on with the Doctor and is happy to be there. I’d put Graeme Harper on a retainer and I’d ask Gangster Man (Philip Martin) to be my script editor. How’s that for starters?
Jonathan Baldwin: What do you see as the lost potential with Colin’s Doctor (if any) and who, or what, is to blame? 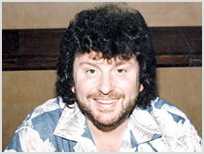 Sue: He wasn’t given a chance to be a proper Doctor. I blame JNT and Eric Saward. They were as bad as each other. They should have left before Colin started. The scripts weren’t good enough and the directors were too safe. He didn’t stand a chance.
Me: We received a few variations on the next question, including submissions from Hector Roddan and James P Quick (the P stands for Patrick, apparently)…
Sue: A likely story.
Me: Here’s the short version:
John Callaghan: How would you kill off the sixth Doctor?
Sue: I’d bring the Valeyard back and I’d start the Time War. Colin would regenerate when he blows up Gallifrey. It’s the sort of thing he’d do. Maybe he would regenerate to stop the Valeyard taking over his body. That would work, too.
Me: Paul Shields and Scott Willison both want to know: did seeing Colin on I’m a Celebrity… colour your opinion of his Doctor?
Sue: No.
Me: Okay, you brought the next question on yourself. Quite a few asked this one, including Peter Nolan and Jessica Howard: 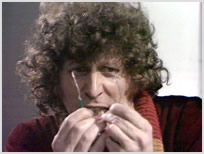 JJ Chambers: Which stories would you have chosen for the prosecution and the defence in The Trial of a Time Lord?
Sue: Genesis of the Daleks for the defence, obviously. For the prosecution, I’d probably choose the one where Adric died. The Doctor ****ed that right up.
Matt Bartley: Colin Baker’s interpretation of the Doctor was smug, arrogant, cruel, cowardly, insensitive and dickish, and this makes him intrinsically more interesting than Peter Davison’s wet lettuce leaf approach. True or false?
Sue: False. No, true. No, wait… False. Oh, I don’t know. Peter Davison isn’t a wet lettuce. Will that do?
Paul McElvaney: Who would be the perfect companion for the Sixth Doctor?
Sue: Glitz. He was the perfect companion for the Sixth Doctor. We saw it.
Me: Lots of variations on the next question (far too many to mention) but they all boil down to this: 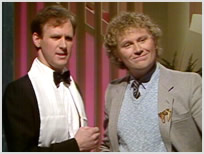 Andy Stacey: If Sue had been the costume designer during this era, what kind of outfit would she have created for the Sixth Doctor?
Sue: A James Bond tuxedo. He would have looked great in a tux.
Me: This one really made me laugh:
BloodyMarquis: What is it like to know that the BBC was airing Edge of Darkness around the same time as The Trial of a Time Lord?
Sue: It makes me want to watch Edge of Darkness again.
Nick Myles: If you had to trade Neil in for one of the various sex pests who lusted after Peri, which one would you choose?
Sue: Brian Blessed. He’d be good with his hands. I’d have to stock up on aspirin, though.
Jarad Higgins: If you had been in charge of Doctor in Distress, who would have sung the song? 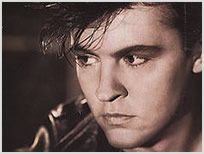 Sue: I liked Paul Young, but that wasn’t really his sort of thing.
Me: It’s no one’s sort of thing!
Sue: Okay, him, then. Plus Boy George, Marilyn and Cheryl from Buck’s Fizz.
Mike Zeidler: Should Colin have kept the beard he grew during the show’s rest period?
Sue: Yes.
Ian Ferguson: What was your worst crime against fashion in the eighties?
Sue: How long have you got? Probably my flat canvas yellow boots, blue leg warmers and blue and white stripped dungarees. I was seriously into braces during the eighties. That was bad.
Adam S Leslie: Apart from the obvious signifiers (theme tune, TARDIS, Daleks, etc.) do you think Doctor Who is recognisably the same show it was when you started watching it? 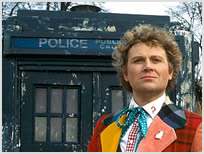 Sue: Yes, of course it is. It goes out of its way to remind me, sometimes.
Paul Roche: Would you be willing to listen to Colin’s work with Big Finish to get a broader prospective of the Sixth Doctor?
Sue: No.
Jane Wilson: If you could break the Trial into four segments, what would you call the stories?

I have to act out the stories in front of her before she finally offers the following:

Sue: Ravalox, Mind Swap, Genocide of the Killer Plants, and The Matrix.
Me: I’ve got a rude question from Steve O’Brien which I can’t include…
Sue: Between Tom Baker and Patrick Troughton. Somewhere near the top.
Me: Moving swiftly on…

Mark Faulkner: As there are 12 days of Christmas and 12 Doctors (including Peter Cushing), which gifts would your true love bring to each Doctor?
Sue: If I could get one present between all of them, I’d get one of those fire escape doors, the sort you find in hotels. You know, the ones that close and lock automatically. I’d get him one for his TARDIS.
Me: That’s nice, but what if you had to give him 12 different gifts? One for each incarnation.
Sue: Okay… 1st: a sonic screwdriver; 2nd: a jacket that fit him; 3rd: a luncheon voucher; 4th: a nice hand-turned pen; 5th: a big kiss; 6th: a new perm; 7th: **** knows; 8th: no idea; 9th: a framed picture of Rose; 10th: a weekend in Barcelona. With me; 11th: a big jar of jelly beans. You know, one of those jars from TK Maxx. The really big one.
Me: Okay, whatever you say. Push the boat out. What about Peter Cushing?
Sue: Nothing. He doesn’t count. 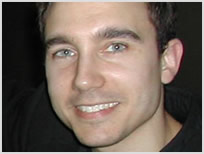 Sue: Don’t look at me like that. This is really difficult. It’s like me asking you: “What would you buy Michael Buble’s bass player for Christmas?”
Me: Music lessons?
Sue: I could get my CDs out if you like. Would you like that? No, I didn’t think so.

When she’s finished sulking, I ask Sue to choose her favourite question… And the winner is Mark Faulkner. Congratulations, Mark, you have won a slice of Nicol’s forthcoming ‘end of experiment’ cake and a mug or T-shirt of your choice. I’ll be in touch with you after Christmas.

Me: Before we go, can you sum up Colin Baker’s Doctor in three words?
Sue: Unpredictable, loud and unfortunate.
Me: Are you looking forward to Sylvester McCoy?
Sue: YES! Actually, I’m looking forward to Ace more; I like her jacket. 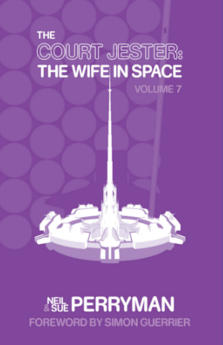